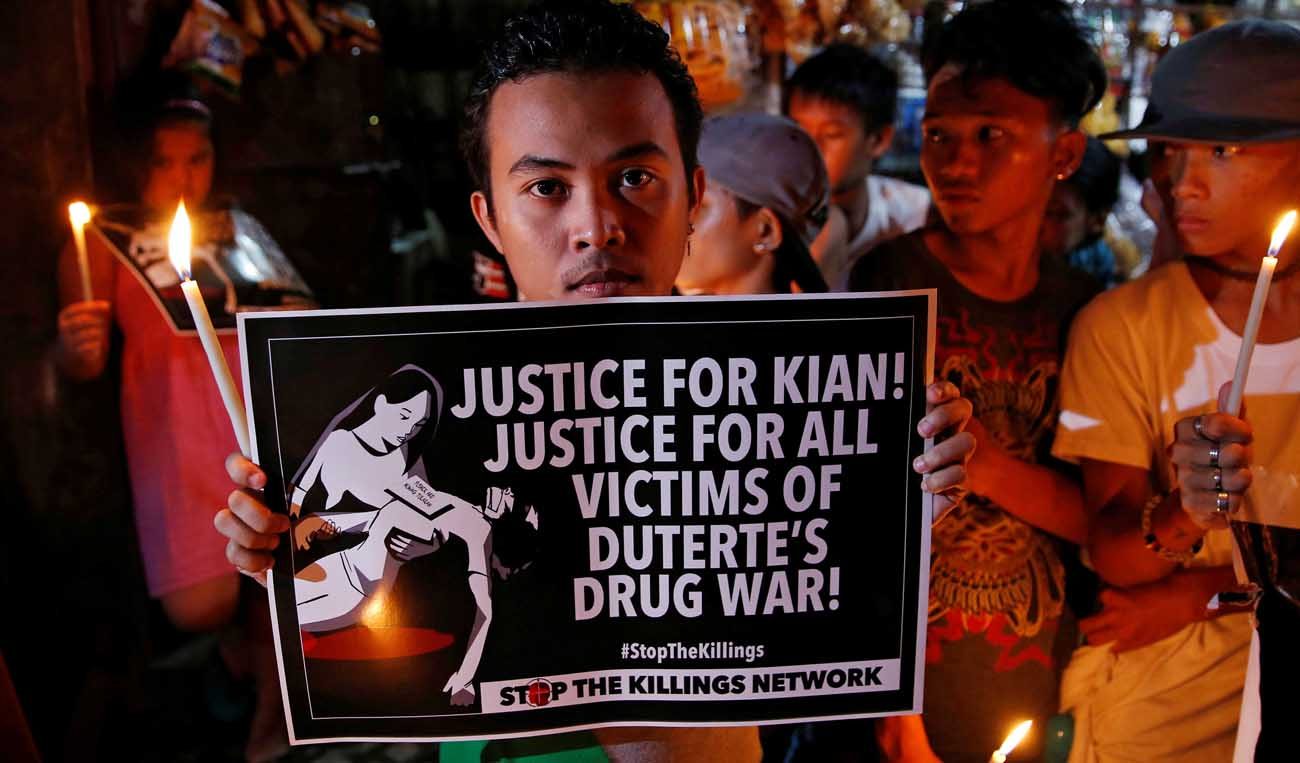 A young man in Manila, Philippines, holds a placard Aug. 25 at a memorial for Kian Delos Santos, a 17-year-old shot in an escalation of Philippine President Rodrigo Duterte's war on drugs. (CNS photo/Dondi Tawatao, Reuters)

Ucanews.com reported that more than 400 people representing an array of organizations launched the Movement Against Tyranny at the Maryhill School of Theology in Quezon City Aug. 28, just days after more than 1,000 protesters joined the funeral march of a 17-year-old student killed by police.

Organizers said a quarter of the mourners came from faith-based groups and included a Catholic bishop and priests, nuns and seminarians.

As Duterte urged Filipinos to uphold the rule of law during commemorations honoring the country’s national heroes, Movement Against Tyranny speakers at the coalition’s launch reminded citizens that many of these heroes were jailed or killed for fighting for the rights of Filipinos.

They tore a banner depicting a horizontal clenched fist that Duterte has made famous and introduced their own logo using the same colors, showing a woman fighting for freedom and civil liberties, ucanews.com reported.

Jose Luis Martin Gascon, head of the government’s Commission on Human Rights, said it was “the widest array of fighting people” he had seen in many years.

Families of some of the estimated 12,000 people killed in Duterte’s drug war spoke of newfound courage to file cases against police. Survivors also testified to being tortured by officers.

Benedictine Sister Mary John Mananzan said one 3-year-old boy was splattered with the brains of his father, whom police shot in the head while they were sleeping. She urged the movement to help protect schools for indigenous children from Duterte, who has threatened to bomb them for allegedly teaching children to be rebellious.

Duterte is on the defensive after police admitted they arrested teenager Kian Delos Santos with no previous information of his involvement in criminal activities. Forensic experts said police killed the teen while he was kneeling. Witnesses testified police shot him as he begged for his life.

The outcry has forced Duterte to backtrack on a pledge to protect all police facing charges of killing suspects in cold blood. But in late August, he threatened to punish groups campaigning for a halt to the killings and has repeatedly blamed human rights activists for smearing his government’s image.

Coalition members said they expect a backlash from government. A police vehicle was seen outside of the event venue.

In a separate campaign, two Carmelite parishes in the Manila Archdiocese have adopted an image of Mary to highlight the suffering of families of people killed in the drug war.

The Sagrada Familia and San Isidro Labrador parishes in Quezon City displayed the icon of “the Mother of Life” Aug. 26, after a weeklong blitz by police killed more than 80 people in Manila and nearby cities.

Both parishes are part of Bagong Silangan village, where more than 40 residents have been shot dead in the last year.

The Carmelites asked Catholics to seek her intercession to stop the bloodbath of people slain without due process.

Augustinian Recollect Brother Jaazeal Jakosalem drew the icon in August 2016 “as a way of protest against the state-sanctioned killings” in the anti-narcotics war.

Ancient Filipino script on the upper right and left part of the image reads “Mother of Life.” The center shows a silhouette of a person in a target, a depiction of victims of human rights violations.

NEXT: ‘Hear the cry of the earth,’ pope and patriarch urge in ecology message