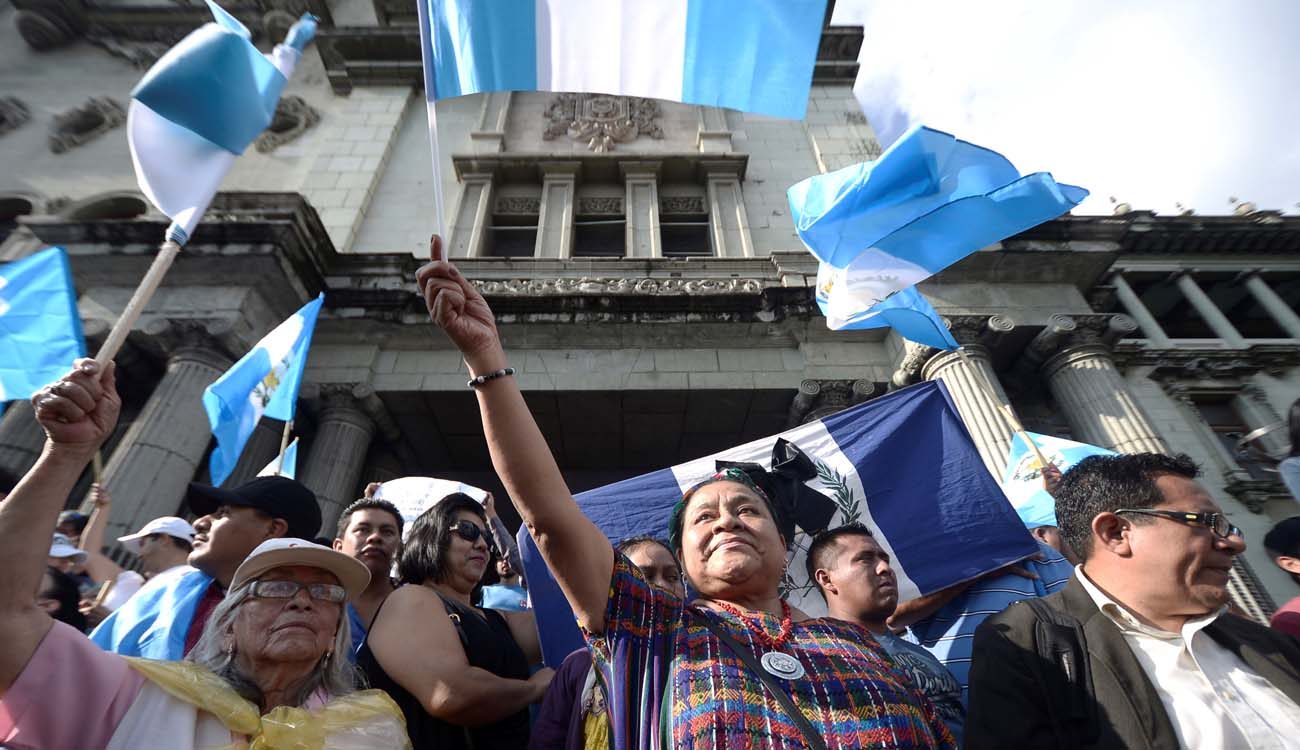 Nobel Peace Prize winner Rigoberta Menchu holds a Guatemalan flag as she joins an Aug. 28 protest against President Jimmy Morales in front of the National Palace in Guatemala City. The Guatemala bishops have criticized the president for trying to oust the internationally appointed commissioner against corruption and impunity. (CNS photo/Fabricio Alonzo, Reuters)

MEXICO CITY (CNS) — Guatemala’s bishops criticized the country’s president for expelling an international anti-corruption commissioner. They also called for public protests to remain peaceful, for politicians to act in the national interest and for the president to obey a court order against his actions.

The bishops expressed “their conviction that the struggle against corruption and impunity constitutes a need that cannot be put off and an urgent task for the Guatemalan state,” said an Aug. 27 statement from the Guatemala bishops’ conference. “Weakening the CICIG” — the International Commission Against Impunity in Guatemala — favors, in the name of supposed sovereignty, that impunity and corrupt individuals emerge as the beneficiaries,” read the statement, signed by Bishop Gonzalo de Villa Vasquez of Solola-Chimaltenango, president of the bishops’ conference.

President Jimmy Morales plunged Guatemala into a political crisis Aug. 27 by declaring “non grata” Ivan Velasquez, a Colombian prosecutor who was the CICIG commissioner. The commission’s work has led to a series of prominent prosecutions of politicians and ultimately led to the country’s then-President Otto Perez Molina being removed from office in 2015.

Guatemala’s constitutional court blocked the order against Velasquez shortly after it was issued.

Morales, a former comedian, was elected in 2015 as a political novice, who campaigned on the slogan “not corrupt, nor a thief” and won over a population weary of corruption and politics as usual. In office, he has been hit by scandals. The CICIG and attorney general’s office have investigated Morales’ brother and a son — both ordered to stand trial — for tax fraud, along with accusations his presidential campaign did not declare all donations.

The attorney general’s office has asked the Supreme Court to strip Morales of his immunity from prosecution.

Mike Allison, an expert on Central American politics at the Jesuit-run University of Scranton, Pennsylvania, said, “Morales’ efforts to remove (Velasquez) is a severe blow to anti-corruption and democratic institution-strengthening initiatives in Guatemala.”

The CICIG was established a decade ago by the U.N. and the Guatemalan government to tackle impunity stemming from the country’s civil war. It has proved effective under Velasquez, but has drawn criticism from some conservative quarters and elite circles, who say it violates Guatemalan sovereignty.