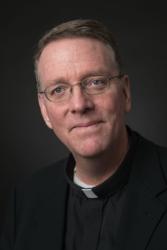 VATICAN CITY (CNS) — Pope Francis has named a 54-year-old Arizona-born Jesuit to be the new head of the church’s Apostolic Administration of Kyrgyzstan.

Jesuit Father Anthony J. Corcoran, who was born in Tucson, has been serving as superior of the Jesuits’ Russia region since 2009 and has been working in Russia for the past 20 years.

The Apostolic Administration of Kyrgyzstan includes about 500 Catholics out of a total population of 5.5 million people, according to Vatican statistics. Five religious-order priests and five women religious minister there.

Born April 19, 1963, he earned a degree in political science from Marquette University in Milwaukee in 1985, then entered the Jesuits.

He earned a master’s in international political economics from Fordham University in New York in 1990, then spent two years teaching at Jesuit High School in New Orleans.

After completing a degree in spiritual theology from Weston, he moved to Russia in 1997, serving as director of the pre-seminary in Novosibirsk and then as spiritual director there. Simultaneously, he served as pastor of the parish of St. Joseph in Berdsk from 1998 to 2008 and as vicar general of the Diocese of the Transfiguration in Novosibirsk from 1999 to 2008.