After repeated pinnings, Senate goes to the mat again on ACA repeal 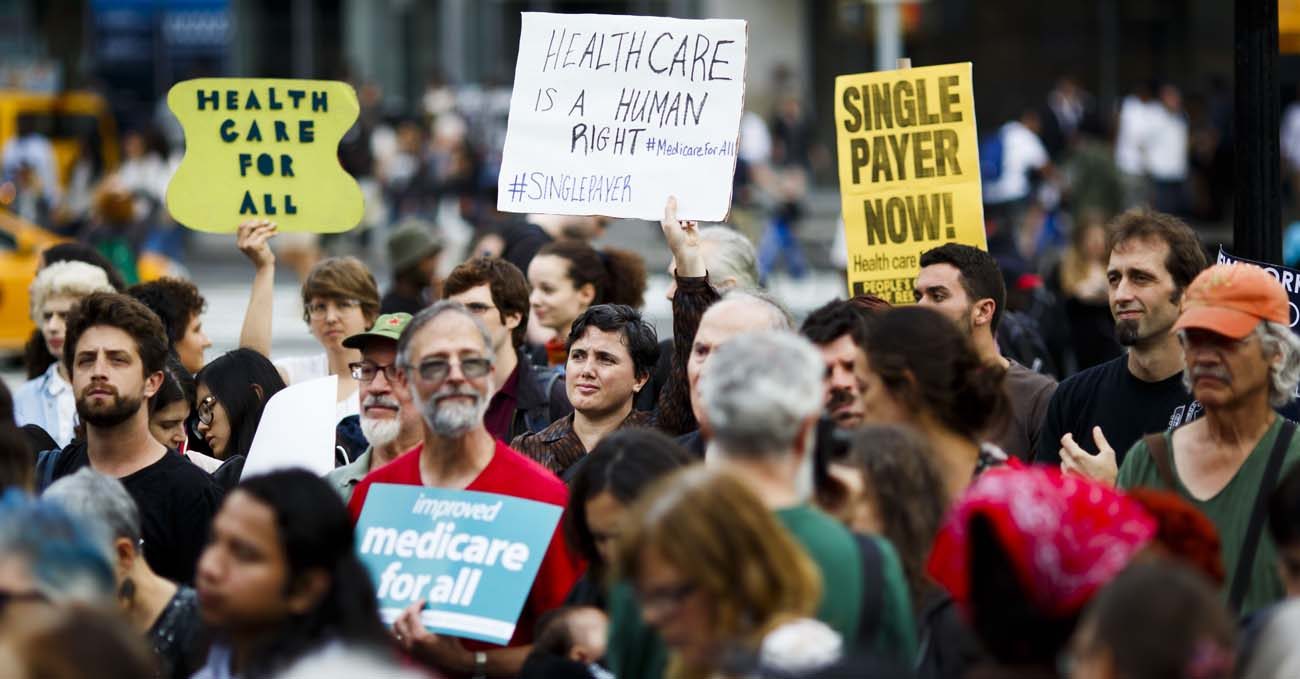 People gather during a rally in late July in New York to support a single-payer health care system and to protest efforts by the Republican Party in Congress to repeal the Affordable Care Act. (CNS photo/Justin Lane, EPA)

WASHINGTON (CNS) — The title of the 1969 film comedy “If It’s Tuesday, This Must Be Belgium” sparked an ongoing series of parodies that continues to this day. The latest version: If it’s Congress, this must be health care.

The Republican-led Congress, with a Republican in the White House, has tried to tackle health care — specifically, the repeal of the Affordable Care Act — since January. On May 4, by a four-vote margin, the House passed the American Health Care Act to replace the Obama administration’s health care law. Two Senate bids to do the same fell short of a majority.

The latest bill is one co-sponsored by Republican Sens. Lindsey Graham of South Carolina and Bill Cassidy of Louisiana. It would repeal the ACA and replace it with block grants for the states to spend as they see fit. The block grants’ size, though, would shrink over time and disappear altogether in 2027.

The U.S. Catholic bishops have already weighed in. In a letter to all senators released Sept. 22, they said the measure must be amended to protect poor and vulnerable Americans, who they say will bear the burden of the worst of the bill’s provisions. They praised a provision ensuring no federal funds would be used for abortion or for plans that cover it.

But unless serious flaws are corrected, they said, this new repeal version “will not meet the moral criteria for health care reform outlined in our previous letters, and must be changed.” The criteria: respect for life and dignity; honoring conscience rights; access for all; and a high-quality plan that is affordable and comprehensive.

The Senate is working under a Sept. 30 deadline to pass the bill. Under the terms of the deadline, they can pass it under the budget reconciliation process, needing only 50 senators to vote for it — assuming Vice President Mike Pence breaks the tie their way. But once the clock strikes midnight, any ACA repeal bill would need 60 votes to thwart a certain Democratic filibuster.

What could give the bill a swift burial is a score from the Congressional Budget Office. Any reconciliation bill requires a CBO score, and earlier bills were pegged by the CBO at 22 million-28 million losing their health insurance by 2027.

A bipartisan coalition of governors had urged a bipartisan solution, and were counting on Sens. Lamar Alexander, R-Tennessee, and Patty Murray, D-Washington, to negotiate a plan to stabilize insurance markets thrown into uncertainty with repeated predictions by President Donald Trump of the ACA’s “implosion.” But Alexander and Murray raised the white flag on their effort Sept. 19; Murray blamed a lack of will on the part of Senate Republicans to join in. That same day, 10 governors urged rejection of the Graham-Cassidy bill.

The bill’s content could prove its own undoing. “It’s a radical change,” declared Karen Blumberg, an analyst with the Urban Institute in Washington who has reviewed previous repeal-and-replace bills, in a Sept. 20 interview with Catholic News Service.

Among the changes: “The individual mandate (is) being eliminated right away. By 2020 the cost-sharing is eliminated and the block grants are put in place. They’re a temporary thing. So they’re present for seven years, but they’re eliminated and there’s nothing to replace it. And there’s very substantial cuts to the traditional Medicaid program from 2024,” Blumberg said.

“We’re talking about, in essence, a repeal with a temporary block grant as kind of a transitional policy, but substantial cuts to the traditional Medicaid programs,” she said. “During that block grant period of seven years, there really are no standards to a large degree in terms of things you have to do with that money.”

Block grants have been used for federal programs for more than 40 years. More than 60 of them are in place today. But the leeway states get in defining how funds are distributed means that programs can vary widely from state to state. And no study has shown block grants to be more cost-effective than federally run programs.

States that counted on the use of federal funds to expand Medicaid’s reach will find no money from Washington if the bill is passed. Four populous states — California, New York, Maryland and Massachusetts — account for 37 percent of the Medicaid cost-sharing, but 34 states would see a shrinkage in federal dollars.

Late-night talk show host Jimmy Kimmel, more focused on health care than the average celebrity after his newborn son needed surgery this year to correct a rare congenital heart defect, blasted the bill Sept. 19 on his show, “Jimmy Kimmel Live!” He said Cassidy, who had appeared on Kimmel’s show after the surgery, fails the “Bill Cassidy Test” because Cassidy’s own must-haves — coverage for all, no discrimination based on pre-existing conditions, lower premiums for middle-class families, and no lifetime caps — don’t exist in the bill he co-sponsored.

In their newest letter to senators, the U.S. bishops reiterated the moral criteria they want to see included in any health care legislation: respect for life and dignity; honoring conscience rights; access for all; and a high-quality plan that is affordable and comprehensive.

The bishops criticized the measure’s Medicaid “per capita cap” because it puts an “insufferable burden” on poor and vulnerable Americans. They did praise the bill for correcting “a serious flaw” in the ACA by ensuring “no federal funds are used for abortion or go to plans that cover it.” They called on senators to amend the bill to address its flaws but retain the pro-life provisions.

“Without significant improvement, this bill does not meet the moral criteria for health care reform outlined in our previous letters, and must be changed,” they said. “The Senate should only proceed with a full report concerning just how many people will be impacted. Our nation must not attempt to address its fiscal concerns by placing an insufferable health care burden on the backs of the poor.”

In a Sept. 21 telephone interview with CNS, David Christensen, vice president for public policy at the Washington-based Family Research Council, said, “We think the Graham-Cassidy bill is actually better from a pro-life standpoint.”

“It eliminates all the tax subsidies for abortion care by 2020″ and defunds Planned Parenthood as the failed Better Care Reconciliation Act would have done,” he added. “We think this is something pro-lifers can really be excited about.”

While Christensen approves of the block-grant approach for its “conservative” principles and its “flexibility for states,” “the state block grant funding in the Graham-Cassidy bill won’t be able to pay or subsidize elective abortion. We think this is a major rollback of the Obamacare abortion expansion.”

One problem in ensuring Americans stay healthy is that lawmakers may not be taking the temperature of their constituents.

ABC News analyst Matthew Dowd noted on “Good Morning America” in early May that Republicans had done what former President Barack Obama could not: make “Obamacare” popular, as 50 percent of Americans polled voiced their support of the American Care Act, nearly twice as many as those who didn’t support it.

Sen. Bernie Sanders, I-Vermont, based his campaign for the Democratic presidential nomination last year on a single-payer system. He introduced a “Medicare for all” bill once Congress returned from its summer sojourn, and quickly gained 15 co-sponsors.

However, 16 is just one-third of the 48-member Democratic caucus, and any such bill is sure to meet a dead end in either chamber of Congress this term.

Single-payer was on the ballot last year in Colorado, but went down to defeat by a stinging 4-to-1 margin as insurance companies had unlikely allies from reliably liberal groups — including organizations established to support legal abortion — who were against it.

Vermont approved a single-payer system, but abandoned the effort in 2014 when a study estimated it would require an 11.5 percent payroll tax hike and an income tax hike of up to 9.5 percent to fund it.

Francis Rooney, a former U.S. ambassador to the Vatican and a first-term Republican House member from Florida, assailed “the statism and socialism of Obamacare” in a July interview with Catholic News Service, strongly hinting that any federal plan guaranteeing coverage to more Americans was beyond the pale.

But in Canada, across Lake Superior from the Michigan district he represented for 18 years, single-payer works, and works well, Stupak said. “They never have to worry about the (medical) bill. They’re secure in their health care, they’re secure in their retirement. They pay for it. They have a value-added tax.”

They may grouse about long waits for elective surgery, he added, “but ask them to switch to any other system? They won’t do it.”

NEXT: Hurricane devastation in Puerto Rico is ‘apocalyptic,’ priest says