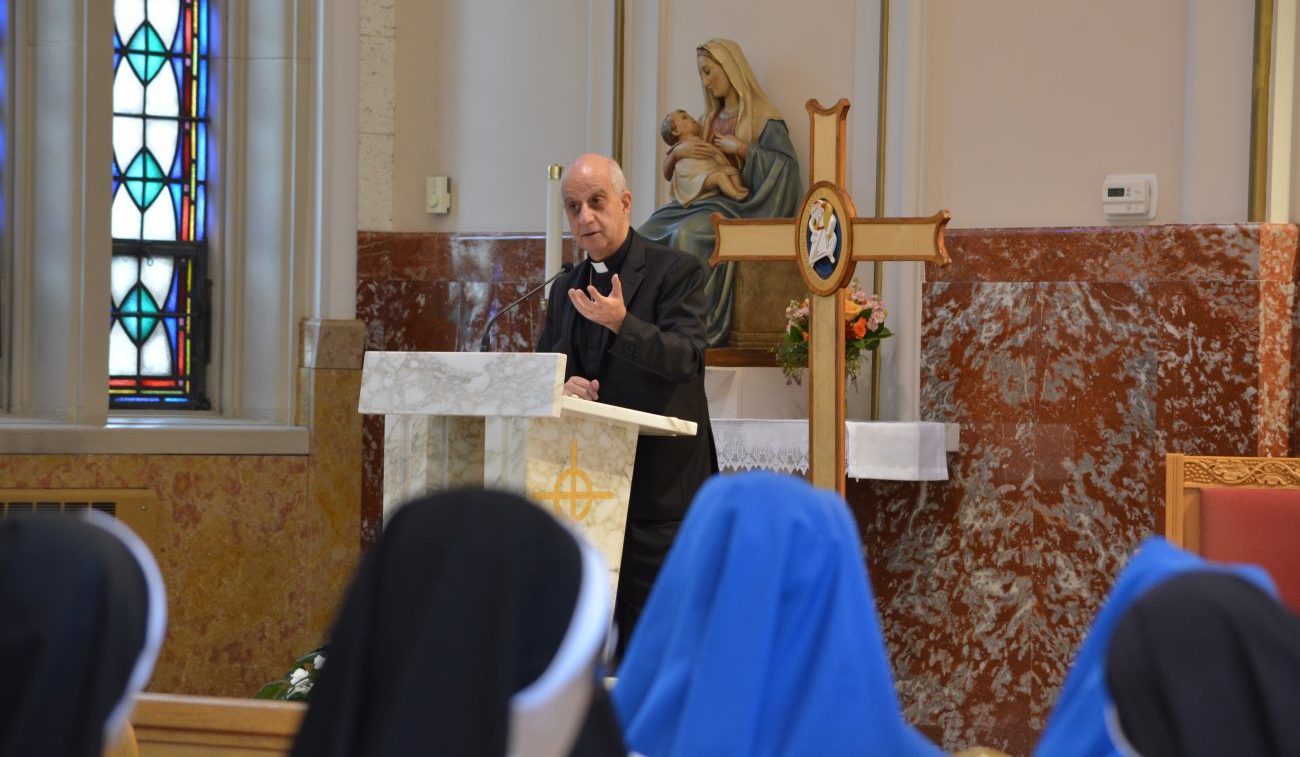 Archbishop Rino Fisichella, president of the Pontifical Council for Promoting the New Evangelization, talks to women religious gathered in Chicago Sept. 17 about the church's need for "a profound renewal of our catechesis." The event at St. Mary of Providence Church in Chicago was sponsored by the Council of Major Superiors of Women Religious. (CNS photo/Simone Orendain)

CHICAGO (CNS) — The head of the Pontifical Council for Promoting the New Evangelization said Catholics “need a profound renewal of our catechesis.”

Archbishop Rino Fisichella told dozens of religious sisters, mostly teachers of the faith, gathered in Northwest Chicago Sept. 17 that there is wrong thinking among the faithful that once they receive the sacraments, they no longer have to learn their catechism.

He said, “By its nature, catechesis is to support believers to understand every day more the mystery of faith.”

Archbishop Fisichella said Catholics could learn this with the help of catechists who are “witnesses” and said that “witness is the sign of a genuine work of evangelization.”

Referring to Pope Paul VI’s 1975 apostolic exhortation on evangelization, “Evangelii Nuntiandi,” the prelate emphasized what he called a “very important” section of the document that said people nowadays are more apt to listen to someone who lives out the faith and speaks of it than to teachers of it and that if they do listen to teachers, it’s because the teachers are themselves witnesses of the faith.

“The world of today needs witnesses,” he said. “And we have got to be there. But don’t misunderstand the word ‘witness.’ It is true that witness, it makes, first of all, our life. But to be a witness, it means also to be a preacher of the word of the Lord.”

Archbishop Fisichella pointed out that being a witness means using one’s mouth to tell others about one’s encounter with Jesus Christ and share what Jesus told them.

However, he also noted the challenge of doing this in a secular age when people are constantly on their mobile devices and, he said, becoming more isolated from one another.

“Everybody in the profound (depths) of his heart feels the desire for God,” the archbishop told Catholic News Service after the talk hosted by the Washington-based Council of Major Superiors of Women Religious. “And for this reason, the mission of the church is the new evangelization. New evangelization doesn’t mean a new way to oblige people to believe in God, absolutely not. … It means only a new step in the world of today, to announce Jesus Christ in the world of today.”

He said, “(It) means to be aware of the changes that we have, the new culture that we have, for instance the digital culture. The internet is creating a new language, a new way of thinking. It has created new behaviors and, paradoxically speaking, is creating new pathologies. And so we need to understand all of that and the new culture how to support believers and how to announce and to challenge people without God to think about him.”

Dominican Sister JoseMaria Pence teaches ninth- and 12th-graders in Carmel, Indiana. She told CNS she was concerned about young people getting caught up in the proliferation of technology.

“When the archbishop was talking about the digital age and the vocabulary that we use, it seems like we have to give a space to the young people, of silence. So that they can hear the word of God and it can take root,” said Sister Pence.

She also said she loved the idea of teaching as a witness.

“I found that very helpful to know that our duty as a catechist is to speak about Christ,” she said.

Sister Pence said, “How do you be a preacher without being preachy? I think you have to be rooted in Christ, and do you actually love Christ? Are you living a life for him? And the young really pick up on any duplicity, any lies. If you’re not really praying, they know. They can sniff it out.”

Franciscan Sister MaryGrace Richey also attended the archbishop’s talk. She teaches third-graders in an impoverished Chicago suburb and said she was struck by the concept of being a witness rather than a teacher.

Sister Richey told CNS, “I go in front of my children everyday and I want them to learn this but I have to be that witness about how excited I am for them to learn what I want to teach them and pass on that faith … because the kids are from the inner city and a very poor area, so witnessing to them that God is alive and that he wants to have a personal relationship with them. And I foster that and show that by me wanting to have a personal relationship with them.”

Archbishop Fisichella also told the sisters one of the problems of “our big crisis of faith of today” is that people do not have an answer when they are asked why they are believers.”

“We cannot be afraid in our catechesis to say the choice of faith makes you free because it allows you to enter in the deepest (parts) of your life,” he said. “Open your mind. Open your heart and you become able to love. You become able to understand your life and future, where you are going.”