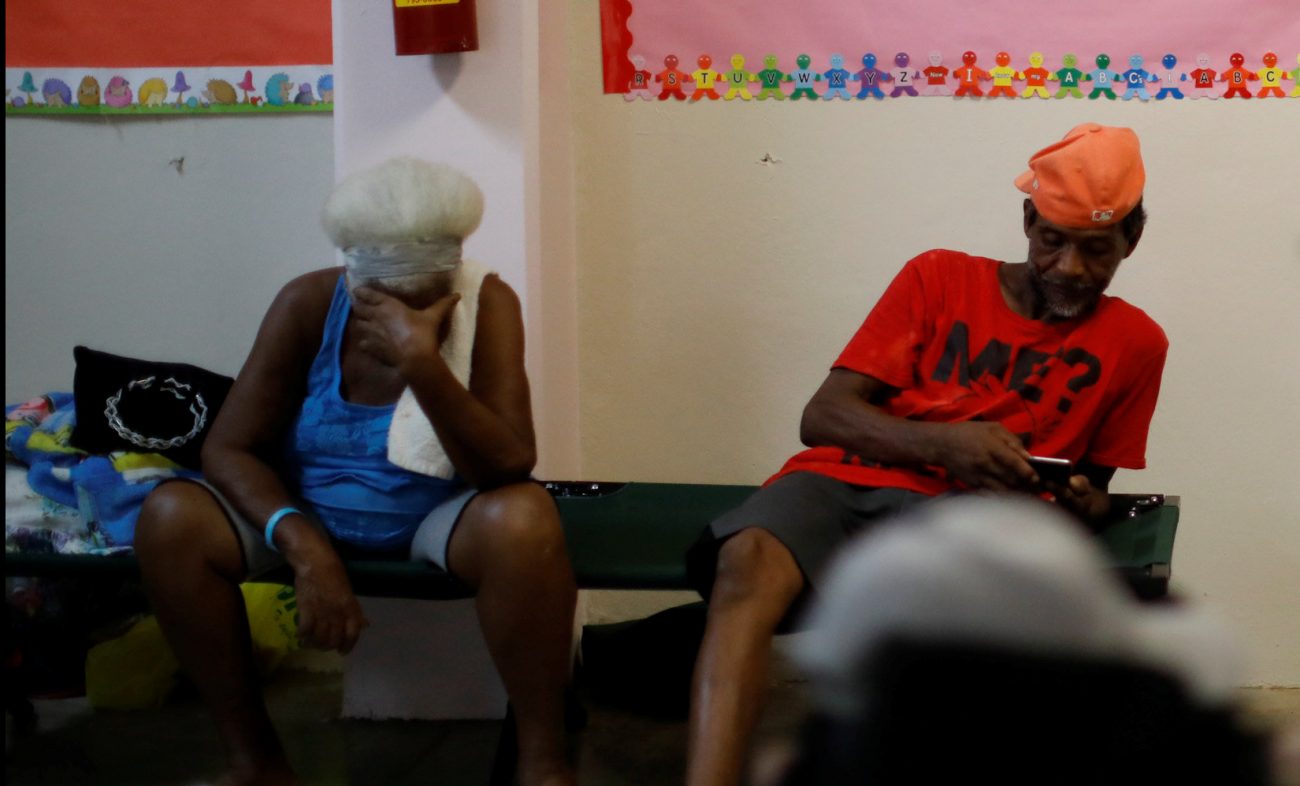 People rest in a school used as a shelter before the arrival of the Hurricane Maria Sept. 19 in Guayama, Puerto Rico. Hurricane Maria has made landfall in Puerto Rico, bringing "catastrophic" 155mph winds and dangerous storm surges, after battering the Virgin Islands. (CNS photo/Carlos Garcia Rawlins, Reuters)

UPDATED – WASHINGTON (CNS) — Thousands sought shelter in Puerto Rico, as Hurricane Maria, called a “monster storm” by many, hit the Caribbean island just short of a Category 5 storm Sept. 20, with winds of 155 miles per hour.

Puerto Rico Gov. Ricardo Rossello said the hurricane had the potential of being the “most catastrophic hurricane to hit Puerto Rico in a century.”

Via Twitter, Catholic Relief Services, the official international humanitarian agency of the U.S. Catholic community, said it had staff in Tortola, in the nearby British Virgin Islands, preparing to help. The Weather Channel said up to 1 million on the island of 3.4 million were without power early Sept. 20.

Even after the storm has passed, some worry about the island’s ability to recover since it already is facing billions in debt from years of financial mismanagement. A disaster modeler for Enki Research in Savannah, Georgia, told Bloomberg news that Maria could cause up to $30 billion in damage to Puerto Rico, a territory of the U. S., as well to the U.S. Virgin Islands.

The local Catholic Charities agency in the U.S. Virgin Islands was assisting people who lost their homes during Hurricane Irma, which struck Sept. 6, and others who sought protection from Hurricane Maria.

Catholic Charities of the Virgin Islands traditionally operates soup kitchens and shelters for homeless people on St. Croix and St. Thomas, and shelters on the islands were full as Hurricane Maria struck Sept. 19-20.

Writing in a post on the Catholic Charities USA website Sept. 19, Bernetia Akin said that her husband, Mic, former director of Catholic Charities of the Virgin Islands, had delivered a $50,000 check and $20,000 in gift cards from the Alexandria, Virginia-based church agency.

No immediate reports on the impact of Hurricane Maria on the three main islands of the small territory were available Sept. 20 other than that Akin reported the shelters were full before the storm hit.

Limited electricity was being supplied by small generators.

“We are serving between 200 and 300 people a day,” the post quoted Andrea Shillingford, the agency’s executive director. The extra demand has placed a strain on the agency, she said, adding that “the only assistance we have received is from the Catholic Church and Catholic Charities USA.”

CRS was preparing to go into the same areas affected by Hurricane Irma in early September once Hurricane Maria’s moved away from the Antilles.

Caroline Brennan, the agency’s emergency communications director, told CNS Sept. 20 that communications with staff and partner agencies in the Caribbean islands had been severed by the latest storm.

The U.S. bishop’s overseas relief and development agency has been working in Antigua, Barbuda, Dominican Republic and Cuba since Irma left homes, churches, schools and businesses in shambles. Brennan said some of the same communities in the Antilles, particularly Dominica, would be in need again.

“The severity of the storms and winds were devastation, especially in areas hit by Hurricane Irma,” Brennan said.

“We anticipate most likely to provide shelter support and basic supplies for people out of homes,” Brennan said. “Depending on the devastation, you can anticipate similar devastation for storms like this in a similar backdrop.”

CRS also was working with Netherlands-based Caritas International partners in St. Martin, which continued to recover from Irma’s punch, she added.

On Tortola, British Virgin Islands, Amanda Schweitzer, emergency coordinator for CRS, said that after what the locals saw from Irma, “they are scared” because Hurricane Maria also was expected to hit the island.

“We are just getting prepared, trying to secure buildings that were damaged by Irma and getting supplies. Families are opening homes to neighbors and others whose homes were destroyed,” Schweitzer said in a news release from CRS.

“Right now, everyone is preparing again for Maria, but things here are already bad,” Schweitzer said. “I’ve never seen anything like this in terms of the destruction. It’s complete devastation.”