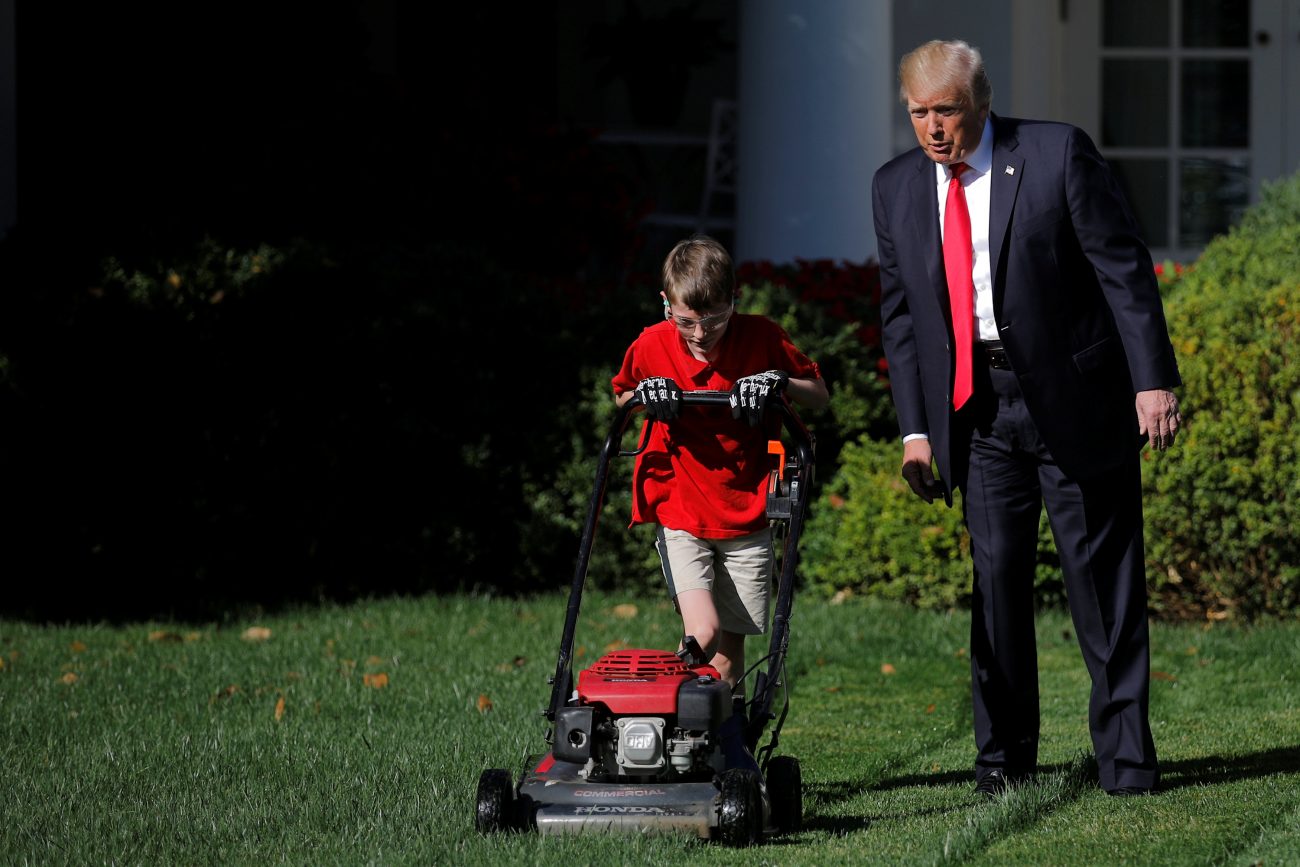 U.S President Donald Trump looks on as Frank Giaccio, an altar server at St. James Church in Falls Church, Va., mows the Rose Garden lawn Sept. 15 at the White House in Washington. The 11-year-old, who wrote a letter to Trump offering to mow the White House lawn, was invited to work for a day at the White House. (CNS photo/Carlos Barria, Reuters)

ARLINGTON, Va. (CNS) — When Francis “FX” Giaccio began his lawn-mowing business in May, the 11-year-old saw beyond the possibility of making enough money to buy a Lego set or a new phone. He saw an opportunity.

“I always wanted to meet the president, but I also wanted to mow somewhere that’s not a normal place,” he said. So he wrote a letter to the White House, asking for a chance show the country what a kid his age could do.

Francis mowed the lawn of the Rose Garden Sept. 15, maintaining his concentration even as cameras flashed and the president himself came to check on the young man’s progress.

“On behalf of Melania and myself, thank you for doing a great job this morning! National Parks Service gives you an A+!” President Donald Trump tweeted. Later that day, Francis and his father, Greg, toured the White House, visiting the Oval Office, the library and “scorch marks from the War of 1812,” the youngster said.

Francis is home-schooled and the oldest of four children. For the past three years, he has been an altar server at St. James Church in Falls Church.

“As one of our altar servers, I’ve known FX for quite a while,” said Father Patrick L. Posey, pastor. “He takes his job at the altar very seriously, so when I heard that he had written the president about his lawn-mowing business I was not surprised. I’m sure it was a thrill for him, something I am sure he will remember for years to come.”

As fall approaches, Francis will offer his services for leaf blowing and later for snow removal as well. When he grows up, he hopes to be a Navy SEAL. “I just want to do something big,” he told the Arlington Catholic Herald, newspaper of the Arlington Diocese.

Is mowing the White House lawn big? “Oh yeah,” said Francis. “When was the last time a kid did that?”