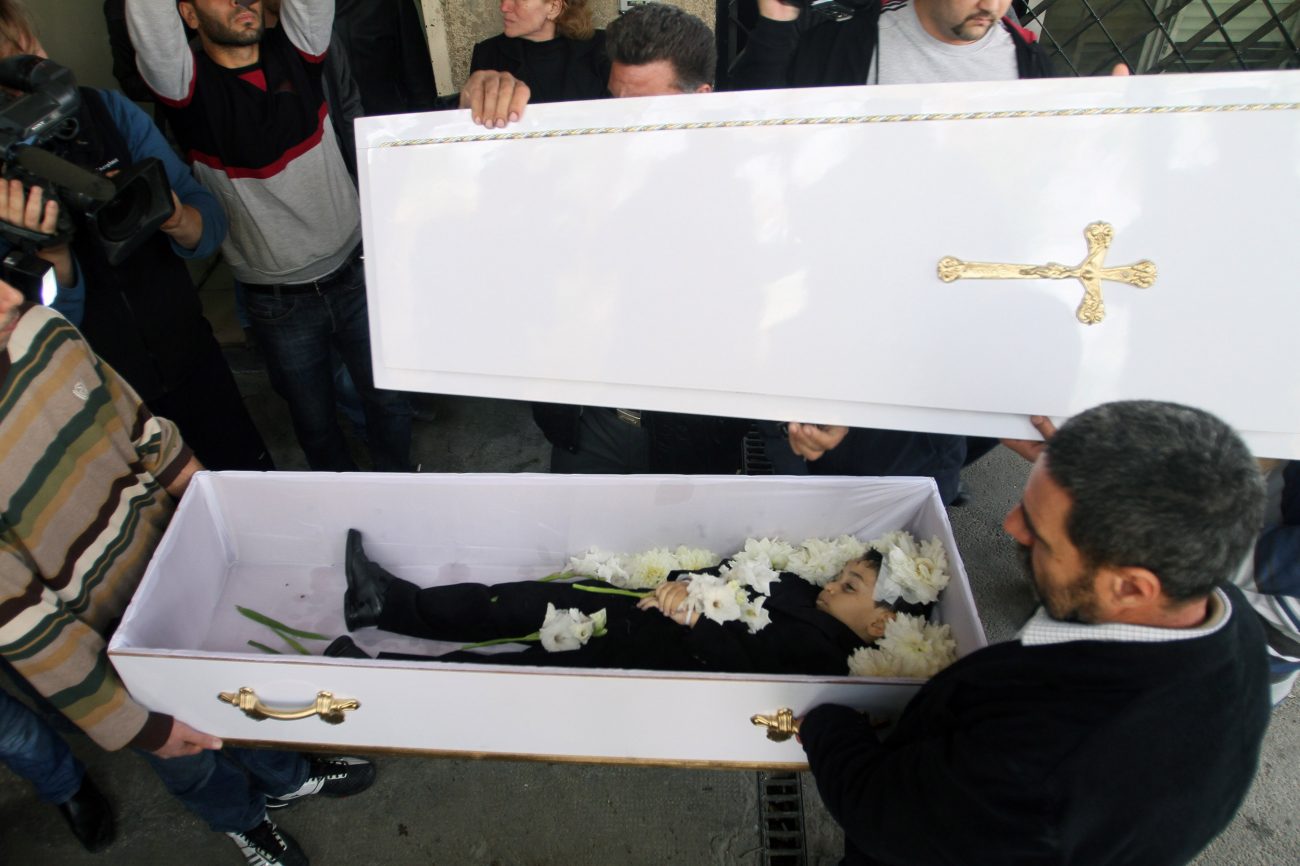 The body of a Syrian child killed in a mortar attack on a school bus in 2013 lies inside a coffin outside a hospital in Damascus. (CNS photo/EPA)

WASHINGTON (CNS) — Instability, lack of basic needs, terror attacks on places of worship and genocide are among the hardships faced by Christians and other ancient minority groups in the Middle East, said a Washington-based advocacy organization seeking to help.

The organization, In Defense of Christians, will highlight such hardships at an Oct. 24-26 summit in Washington in an effort to sway U.S. government and other public officials to do more to protect and preserve the region’s Christian minority communities targeted by extremists, said Andrew Doran, IDC’s senior policy adviser.

Although the goal behind the creation of the organization three years ago had been to expose and mitigate the dangers that the Islamic State group posed to Middle Eastern Christians, it has become clear that eradicating the extremist Muslim group and other similar networks would not be sufficient, he told reporters at IDC’s Washington headquarters Sept. 19.

“The work for protecting Christians and other minorities in the Middle East is much more expansive than just ISIS, and it’s an issue that, unfortunately, we believe is going to be with us for decades to come,” he said.

The two-day gathering of Christian minority leaders, academics and U.S. officials will focus on helping the Middle East Christians and other targeted groups by first promoting security and stability in Lebanon, where millions of Christian and non-Christian refugees have fled wars in their home countries of Syria and Iraq, Doran said.

“The presence of so many refugees in Lebanon has been very destabilizing over the course of the past six years. Many of them have started to go back, some have immigrated to the West, but there are still many, many in Lebanon,” Doran said.

Another focus of the summit would be ensuring emergency relief for victims of genocide in Syria and Iraq, where Doran said he recently witnessed first-hand the suffering of Christian and other minority communities.

“I was just there … earlier this summer, and the only aid that is getting through seems to be private, nonprofit aid, and it is reasonable for the American taxpayers who have taken an interest in the protection of Christians and other minority communities, especially genocide victim communities in northern Iraq, to expect that when their elected representatives vote to send aid from the American taxpayer to genocide victims … that it arrived there,” he said.

Holding U.S.-allied nations responsible for both protecting their minorities and prosecuting those behind attacks on those communities will also be a major focus of the summit, titled “American Leadership and Securing the Future of Christians in the Middle East.”

Additionally, he said the summit would push for a U.S. task force to identify and punish all aiders of terrorism, and for Turkey to recognize the 1915 genocide of Armenians.

NEXT: Rothers still rooted to land where martyred priest and siblings grew up