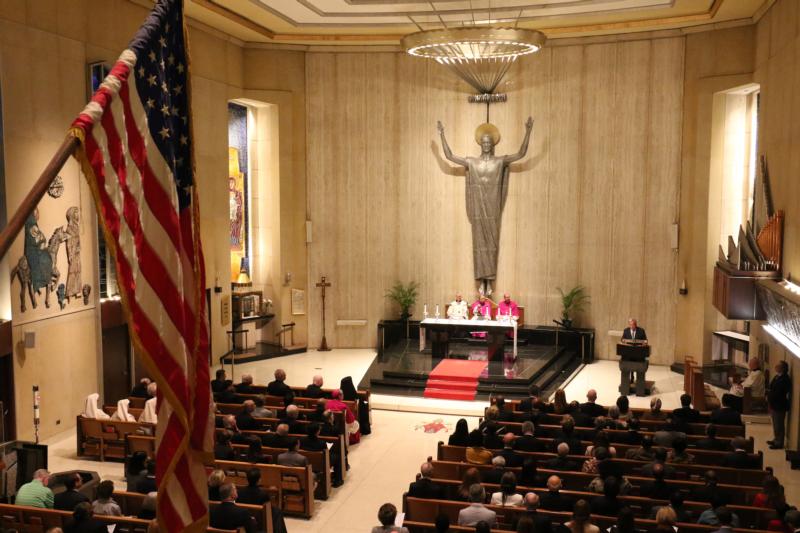 United Nations Secretary-General Antonio Guterres speaks during a prayer service Sept. 11 at Holy Family Church in New York City. The service, hosted by the Vatican’s permanent observer mission to the U.N., was held on the eve of the opening of the 72nd session of the U.N. General Assembly. (CNS photo/Gregory A. Shemitz)

NEW YORK (CNS) — People from all walks of life who share a global vision of peace, justice and universal respect for human dignity can draw inspiration from the lives and sacrifices of those who perished in the 9/11 terrorist attacks.

Speakers at a Sept. 11 prayer service on the eve of the opening of the 72nd session of the U.N. General Assembly said the memory of the vibrant lives of the diverse workers at the World Trade Center towers that day 16 years ago and the selfless heroism of those who came to their aid are reflected in the daily challenges of those who strive for unity, tolerance and compassion.

The interreligious service is an annual event sponsored since 1987 by the Permanent Observer Mission of the Holy See to the United Nations, the Archdiocese of New York and the Church of the Holy Family, the self-described “United Nations Parish” where it was held.

Archbishop Bernardito Auza, papal nuncio to the United Nations, welcomed clergy, diplomats, parishioners and staff from the nearby U.N. headquarters. The late afternoon sun streamed in through stained-glass windows as multilingual prayer and song filled the church.

“For Christians who believe in the communion of saints and for all those who believe in relationships that bridge the chasm of death, we draw inspiration from these souls and from the sacrifices we witnessed on 9/11,” Bishop John O. Barres of Rockville Centre said in his keynote meditation.

“Each one of us here, the tens of thousands associated in the mission of peace of the United Nations … find in the 9/11 heroes’ ongoing witness a calling to expand our souls and our global vision of peace and justice in the world and to commit ourselves anew to the sacrifices necessary to make that vision a reality,” he said.

Bishop Barres said, “The inherent ethical law inscribed in our humanity bears witness to human dignity and is the foundation for all human rights. It is the cornerstone for an ecological conversion.”

The theme of the general debate at the General Assembly this year is “Focusing on People and Striving for a Decent Life for All on a Sustainable Planet.”

The protection and promotion of human life in all its stages, Bishop Barres said, is the starting point for every human-centered approach to a decent life on a sustainable planet.

“The dignity of human life is at the core of a humane, ethical and compassionate approach to the global reality of migration” and the migration crisis derives from an inadequate respect for the human person, he said.

“When human life is not recognized as inviolable, all barriers fall. Human rights and the preservation of the environment become simply options without particular normative value,” he continued. “The tragic deaths of migrants fleeing war and conflict sadly become mere statistics that are easily forgotten and eventually consigned to the back rows of dusty archives.”

Antonio Guterres, U.N. secretary-general since January 2017, said “common humanity” unites all those at the world body and “is the belief that underpins the organization.”

“The United Nations is built on the premise that we are all equal in rights and worth and that we have a duty to practice tolerance and live together in peace with one another as good neighbors,” he said.

“Whatever our faith, this is a creed that we all can follow, and it is a directive that we must all observe,” despite headlines that suggest the “essential duty has been forsaken by too many in too much of the world,” Guterres said.

Throughout his career, Guterres said he has seen people around the world who had every right to express anger at their plight reach out to others in an embrace of fellowship and mutual support.

“Every day, in every country, innumerable acts of kindness and compassion are easing the lives of migrants, refugees, the victims of disasters, the poor and the powerless,” he said. “These are the stories we must honor and draw inspiration from.”

Slovakian Foreign Minister Miroslav Lajcak, who is president of the General Assembly’s 72nd session, said the people-centered work of faith communities and the U.N. overlaps “across the spectrum” in humanitarian efforts, long-term development initiatives, education and health.

He said faith communities played an important mediation role in a peace deal signed during the summer in the Central African Republic and must continue to be a valuable partner to the U.N.

“We must learn from their experiences and knowledge,” he said. “We must support each other in our work towards one common goal: to make the world a better place for all people to live in.”

Bishop Barres recalled the 1980 murder of Archbishop Oscar Romero of San Salvador. In 2015, the U.N. marked the 35th anniversary of his death with a public exhibition on his life.

He said the archbishop “was assassinated (during Mass) minutes after he had summoned soldiers conscientiously to obey God in respecting the human dignity of their neighbors rather than follow the directives of government and military leaders ordering them to violate their neighbors’ human rights through torture, slaughter and other evils.”

He compared the martyred archbishop to the heroes of 9/11 and U.N. workers who risk their lives for others.

“Archbishop Romero is one in a firmament of bright stars illuminating the world’s darkest nights and indicating to us all the path to personal fulfillment through lifting others up. He humbly shows us how to focus on people and strive effectively for peace and a decent life for all,” Bishop Barres said.

Prayers at the service were drawn from texts delivered by Pope Francis, including “Laudato Si’, on Care for Our Common Home” and addresses he gave on the island of Lesbos, Greece, and in Krakow, Poland.

NEXT: Bishops pray for ‘safety, care’ of all hit hard by two massive hurricanes