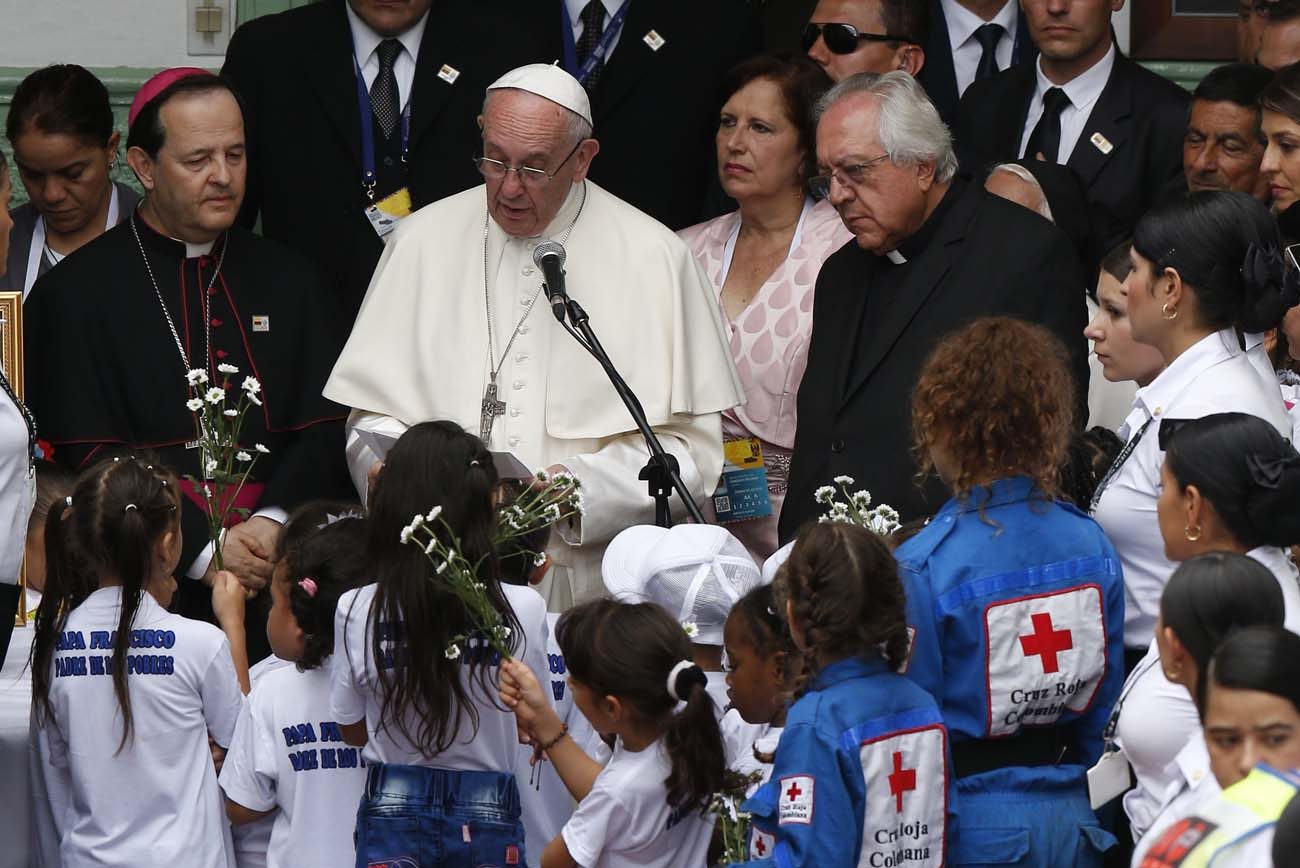 CARTAGENA, Colombia (CNS) — Pope Francis called on Catholics to find their future priests and religious in rough and imperfect places. People from such places, he told an audience of priests, seminarians and religious, were indispensable for promoting peace and reconciliation in a country such as Colombia.

“God manifests his closeness and his election. He changes the course of events to call men and women in the frailty of their personal and shared history,” Pope Francis said Sept. 9, the day before the end of his five-day visit to Colombia. He spent the day in Medellin, where, as in the other three cities on his itinerary, he continued his calls for reconciliation in Colombia.

“Under what conditions are the vocational fruits of special consecration born? No doubt in situations full of contradictions, of light and darkness, of complex relational realities,” he added. “We are a part of this cultural crisis and, in the midst of it, in response to it, God continues to call.”

The country suffered five decades of armed conflict and is attempting to implement a peace according between the government and main guerrilla group. Medellin was once synonymous with that violence.

Pope Francis paused to recall the bloodletting in Medellin — once the base of cartel kingpin Pablo Escobar — and the young lives “destroyed by drug cartel hitmen.”

“It evokes so many young lives truncated, discard, destroyed. I invite you to remember, to provide accompaniment in this mourning, ask forgiveness for those who destroyed the illusions of so many young people,” Pope Francis said of Medellin. “Ask the Lord to turn their hearts. Ask that this loss of young humanity stops.”

His speech, which often went off script, evoked laughter and often applause.

“God always brings about the miracle of producing good clusters on the vine, like ‘arepas’ at breakfast,” he said to a delighted audience. “Arepas” are Colombia’s cornmeal staple.

He returned throughout his speech to the theme of the parable of the true vine from the Gospel of John. The parable says no branch will bear fruit on its own and must remain in the vine, which is Christ.

“This vine — which is Jesus’ vine — has the characteristic of being true,” Pope Francis said. “We are a people chosen for the truth, and our call has to be in truth. There can be no place for deceit, hypocrisy or small-mindedness if we are branches of this vine, if our vocation is grafted onto Jesus.”

Using the parable of the true vine to illustrate his points, Pope Francis raised some recurring themes of his papacy: priests getting out of their churches, religious people and their penchant for appearances, and the pursuit of money plaguing ministries.

“Vocations associated with special consecrations die when they love to be sustained with honors, when they are driven by a search for personal reassurance and social advancement, when the motivation is ‘to climb the ladder,’ to cleave to material interests and to strive shamefully for financial gain,” Pope Francis said. “As I have said before on other occasions, the devil enters through the wallet.”

He also lauded young people and urged the church to leverage their energy and talents.

“Many of them stand together against the evils of the world and become involved in various forms of political action and volunteer work,” Pope Francis said. “When they do so for Jesus, feeling that they are a part of a community, they become ‘street preachers,’ who bring Jesus to every street, every plaza and every corner of the earth.”

Street preaching, he explained, is not obnoxiously proselytizing, rather walking the walk of Christian witness.

Pope Francis cited an anecdote from his lunch with young people at World Youth Day 2016 to illustrate his call for “street preachers.” When a pilgrim asked about speaking with an atheist friend, the pope responded, “The last thing you should do is say something.

“Start to act in a way that the doubt he has inside will make him curious, and he will start to ask you,” the pope recalled telling the youth. “And when he asks about your testimony, then you say something. This is being a street preacher.”

While in Medellin, Pope Francis celebrated Mass for an estimated 1.3 million people. He also visited an orphanage operated by the Archdiocese of Medellin, which attends to children who were left without parents by Colombia’s armed conflict, among others in need.

One of the orphans, Claudia Yadira Garcia Ramirez, 13, lost her family in a guerrilla attack when she was 2, leaving her aunt to raise 10 children. She also was injured by a bullet grazing her head, but found her way to Hogar San Jose and started on the path to recovery.

“The closeness of the director and staff who accompany us in the homes helped heal my pain and sadness with the love that I received, and opportunity offered of a new life for me and my siblings,” she said.

PREVIOUS: At final Mass in Colombia, pope calls for change of culture

NEXT: In Cartagena, pope prays for Venezuela, denounces modern slavery