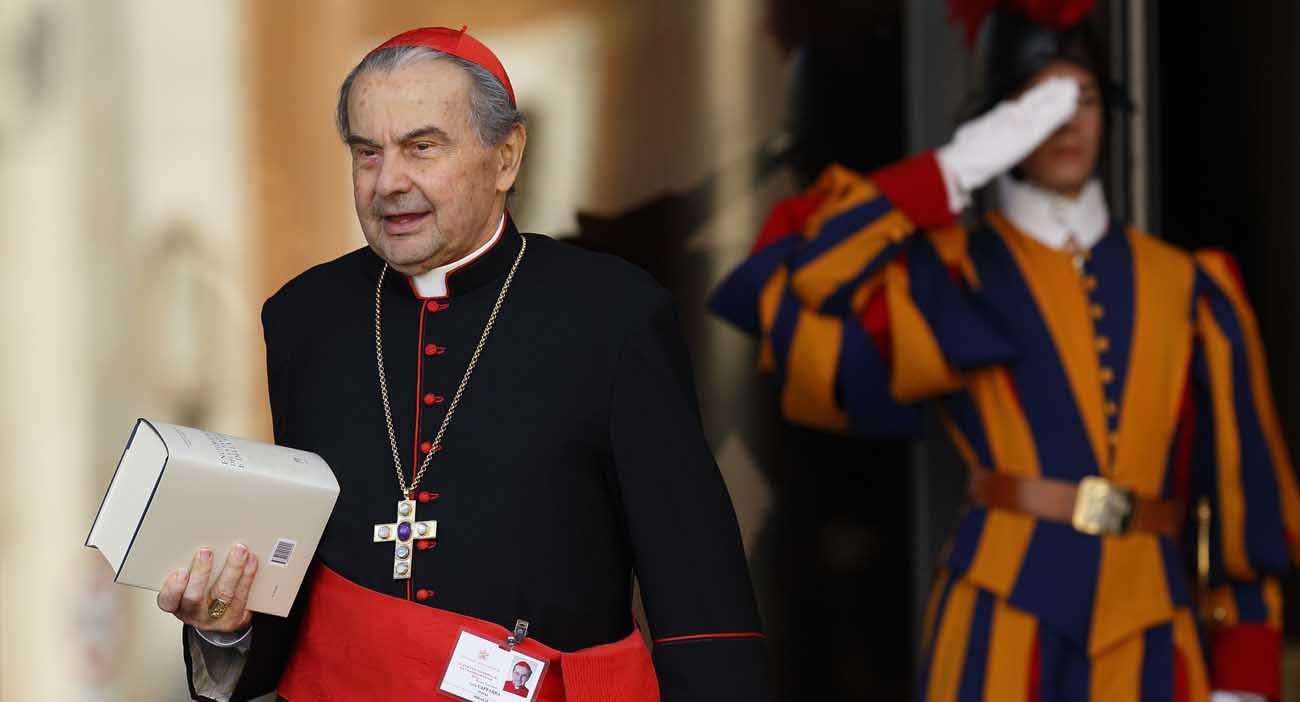 Cardinal Carlo Caffarra of Bologna, Italy, is seen at the Vatican in this 2014 file photo. The Italian cardinal died Sept. 6. He was 79. (CNS photo/Paul Haring)

VATICAN CITY (CNS) — Italian Cardinal Carlo Caffarra, retired archbishop of Bologna and founder of the Pope John Paul II Pontifical Institute for Studies on Marriage and the Family, died Sept. 6 at the age of 79.

Cardinal Caffarra was one of four cardinals who formally asked Pope Francis to clarify his teaching on Communion for the divorced and civilly remarried.

When the four prelates did not receive a response, they released the letter to the press saying, “We have noted a grave disorientation and great confusion of many faithful regarding extremely important matters for the life of the church,” especially given the contrasting interpretations — even among bishops — of Chapter 8 of ‘Amoris Laetitia,'” the chapter dealing with ministry to the divorced in Pope Francis’ exhortation on the family.

The pope, who was on his flight to Colombia for a five-day visit when news of Cardinal Caffarra’s death was announced, expressed his sadness in a Sept. 7 telegram addressed to Archbishop Matteo Maria Zuppi of Bologna.

“I think affectionately of this dear brother in the episcopate, who served the Gospel with joy and loved the church intensely and I remember with gratitude the generous pastoral work carried out by him,” the pope said.

The pope praised Cardinal Caffarra as a “zealous pastor” and prayed that God “will receive his faithful servant and distinguished pastor in the heavenly Jerusalem.”

Born June 1, 1938, in Samboseto di Busseto, Carlo Caffarra attended the seminary in Fidenza and was ordained to the priesthood in 1961.

He earned a doctorate in canon law from the Pontifical Gregorian University in Rome with a thesis on the purpose of marriage. He also earned a diploma in moral theology.

While teaching in seminaries and universities in northern Italy, he continued his studies on issues related to marriage, family life and procreation.

He was teaching medical ethics at Rome’s Sacred Heart University in 1974 when Blessed Paul VI named him a member of the International Theological Commission, a membership he held for 10 years.

In 1983, St. John Paul II named him a consultant to the Congregation for the Doctrine of the Faith. Part of his five-year service overlapped with the time Cardinal Joseph Ratzinger — now retired Pope Benedict XVI — led the congregation.

St.  John Paul named him bishop of Ferrara-Comacchio in 1995 and named him head of the Archdiocese of Bologna late in 2003.

As founding president of the Pope John Paul II Institute for Studies on Marriage and the Family in Rome in 1981, he presided over the opening of the affiliates of the institute in Washington, Mexico and Spain.

In March 2006, he was inducted into the College of Cardinals by Pope Benedict and was outspoken in his defense of Catholic teaching on marriage, contraception, abortion and homosexuality.

Cardinal Caffarra’s death leaves the College of Cardinals with 221 members, 120 of whom are younger than the age of 80 and therefore eligible to vote in a conclave to elect a new pope.

NEXT: Villavicencio: Colombian city of ‘victims and victimizers’