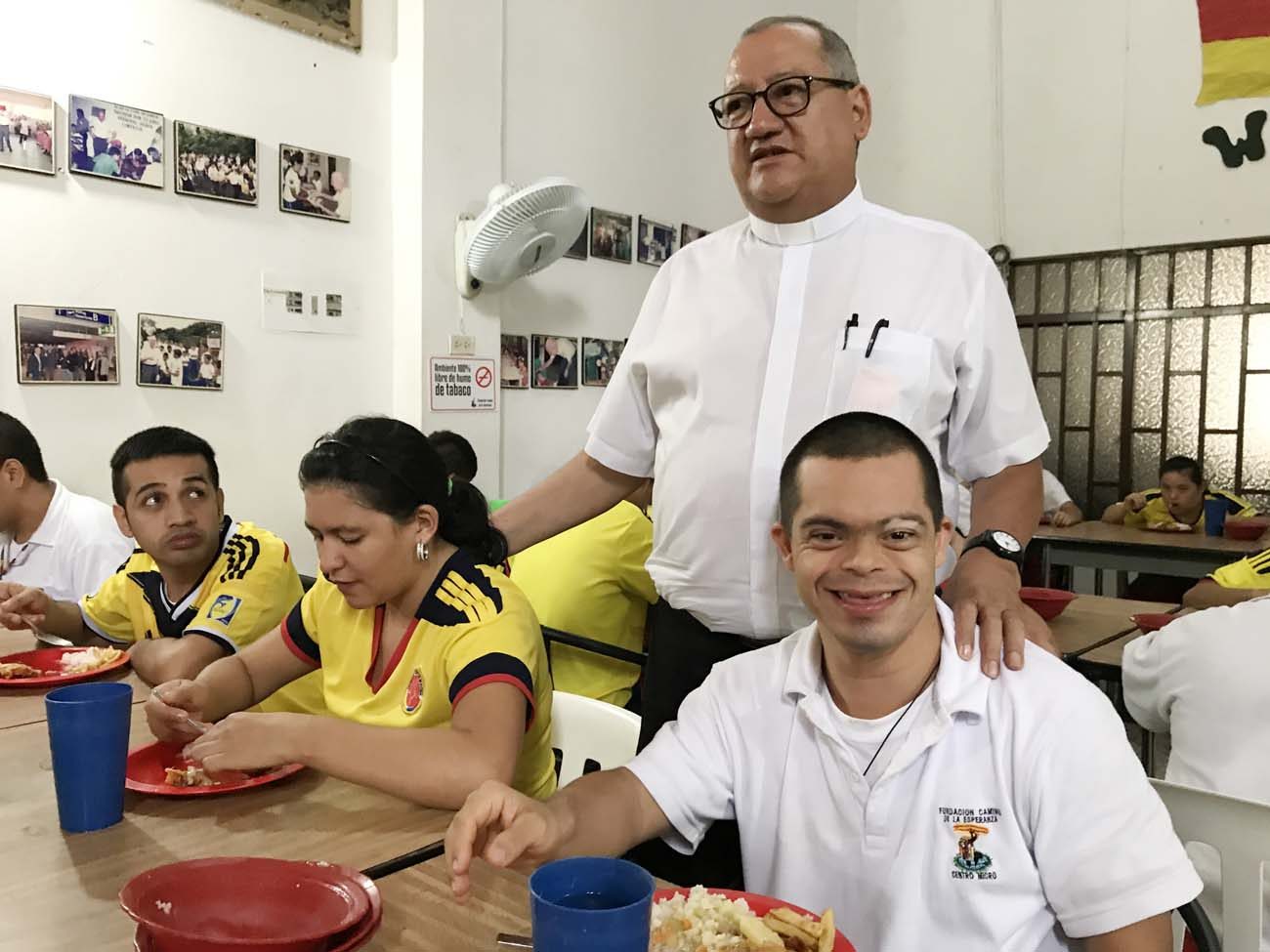 VILLAVICENCIO, Colombia (CNS) — People in need in this city set in the heart of Colombia’s cattle country line up outside the Pope Francis food bank, a warehouse built with a donation from the pontiff.

Father Carlos Ricardo, director of social ministries for the Archdiocese of Villavicencio, says the facility meets a great need in a region where people have been thrown off their land in the violence afflicting Colombia and have had to start over in shanties built around Villavicencio.

“It’s a city of settlements, made up of people that had to leave their land due to war,” Father Ricardo said. “Villavicencio is made up of victims and victimizers. They’re both here. There are people displaced that lost their homes, the things that they had. There are also people being reinserted into society from the guerrilla groups and paramilitaries.”

Pope Francis arrives Sept. 6 in Colombia for a five-day visit. Among the four cities he will visit is Villavicencio, where he will celebrate Mass for an estimated 700,000 people — including indigenous Colombians — and will later offer prayers for reconciliation with victims of violence attending from all corners of Colombia.

Promoting reconciliation is a recurring theme in the pope’s trip and a priority among Catholics in Colombia after five decades of armed conflicts and the signing of a peace accord between the government and the main guerrilla group.

Villavicencio, 75 miles southeast of the capital, Bogota, is the gateway to remote regions such as the Amazon, and Pope Francis is also expected to promote reconciliation with creation and speak of environmental issues.

Church officials say the trip to Villavicencio, population 500,000 and growing quickly over the past decade as displaced persons arrived, is heavy on symbolism and meant to send messages on topics important for Colombia and the church as a whole.

Villavicencio “was the heart of the conflict for many years in this region, with many different armed groups,” said Msgr. Hector Fabio Henao, director of Caritas Colombia. It’s a city where Pope Francis “will find victims of the armed conflict.”

“It’s also on the road to the Amazon. The pope can point toward the Amazon, toward its inhabitants, (the) destruction of the jungle over the decades … and make a reference to reconciliation with nature,” he said.

Locals call Villavicencio the gateway to the “Llano,” the plains of Colombia. With an abundance of available land, Father Ricardo says the region attracted the displaced persons from around the country, who had to start over from scratch after losing their properties.

Though close to the capital, Villavicencio is described a bottleneck for those traveling to the southern parts of Colombia. It’s also the place where the “rest of Colombia begins,” vast swaths of rugged and sparsely populated terrain, along with the Amazon region — an area taken advantage of by guerrillas, who used its thick vegetation for cover.

The area has been largely forgotten by the government. Paramilitaries, often paid by palm growers, inflicted violence on vulnerable populations. The Catholic Church has played a role, providing services where the state has been absent.

That work has not always been appreciated by those in positions of power. Priests ministering to populations with unpopular political opinions or areas occupied by guerrilla groups were seen with suspicion or as promoting liberation theology.

“There have been murders of human rights leaders … and priests for defending human rights by the state itself,” said Father Ricardo. “We work with the poor, giving them the word of God, but (elites) thought that we were subversive, that if we were not with them, we were against them … that we’re spreading a revolutionary mentality.”

While in Villavicencio, Pope Francis will beatify two martyrs: Bishop Jesus Emilio Jaramillo Monsalve of Arauca — who was murdered by Marxist guerrillas in 1989 in an area rife with conflict — and Father Pedro Maria Ramirez. The latter was hacked to death by a machete-wielding mob in 1948 after the assassination of presidential candidate Jorge Eliecer Gaitan, whose Liberal Party was often scorned by the Catholic Church.

In this region, the peace accord signed by the federal government and the Revolutionary Armed Forces of Colombia, or FARC, is still viewed suspiciously by many, including some in the church hierarchy.

Father Ricardo expressed hope the pope’s trip to Villavicencio would “set a single direction” for the church to follow in the attempts to promote peace in Colombia.

Reconciliation will not be easy, but some in Villavicencio appear willing.

“Forgiving is hard,” said Jeydi Gonzalez, a program director with the archdiocesan social ministry in Villavicencio, whose father was among six men murdered by paramilitaries. Making forgiveness harder is that provisions under the peace accords mean one of her father’s killers — four others implicated were killed — will have his sentence cut from 50 years to seven years.

“I feel very happy” the pope is coming to Colombia “but also anxious to know what he is going to say,” said Gonzalez, who credits accompaniment from a priest after her father’s murder for helping her family at a time when others in their village viewed them suspiciously. “They stigmatized us,” she said, because they thought her father had to have been involved with the guerrillas.

The priest’s intervention also provided her with an opportunity to continue studying and earn a master’s degree from a Canadian university.

Gonzalez said she hoped Pope Francis “can help bring home a message that speaks to our reality, the context which Colombia is experiencing.”

NEXT: Pope arrives to help promote healing in Colombia, scarred by war