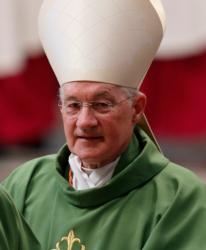 Cardinal Marc Ouellet, prefect of the Congregation for Bishops, is pictured in a 2014 photo at the Vatican. (CNS photo/Paul Haring)

The Canadian cardinal, who serves as the Vatican’s prefect of the Congregation for Bishops, told Canadian bishops the document does not signal “changes to doctrine or to sacramental discipline,” but represents a pastoral approach that takes into consideration “the good of the person,” according to his or her circumstances.

“Any alarmist interpretation” that says the document is “a break with tradition,” or a “permissive interpretation that celebrates access to the sacraments” for the divorced and remarried is “unfaithful to the text and to the intentions of the supreme pontiff,” said Cardinal Ouellet.

Speaking Sept. 25 to more than 80 bishops and eparchs attending the annual plenary of the Canadian Conference of Catholic Bishops, Cardinal Ouellet said contrasting reactions to the document have been “delighting some, worrying others, leaving none indifferent.”

The former Quebec City cardinal said Chapter 8 of the document is a call for a “new pastoral conversion” that can bring comfort to suffering people. He conceded that although many welcome this approach, others see it as a risk, “a break with the traditional doctrine and discipline” of the Catholic Church. Chapter 8 became the “interpretive key” for the document, making people judge it as either “positive and welcome,” or “ambiguous and risky,” he said.

“Amoris Laetitia,” the pope’s 2016 apostolic exhortation that followed synods of bishops on the family in 2014 and 2015, “deserves more attention in itself than merely the public debate” around “disputed points,” he said.

Pope Francis identified Chapters 4 and 5 as the “center of the document” said Cardinal Ouellet. The document “must be read as a whole” to understand the “limits and extent of the pastoral orientations.” Often, however, criticisms have been removed from their context, he said.

“Amoris Laetitia” seems “especially urgent and needed in Canada” because of a gap between the church’s official teaching and the “lived experience of couples and families,” Cardinal Ouellet said. This gap has widened since the Second Vatican Council due, in part, to the influence of what St. John Paul II called “the culture of death”: unrestricted abortion, euthanasia, contraception, pseudo-marriage of same-sex couples, divorce and assisted suicide.

“We must re-read ‘Amoris Laetitia’ in a spirit of pastoral conversion,” and with “receptivity to papal teaching,” to help cultures that are “far from the faith” experience the “joy of the Gospel that emerges from faith,” he said.

Pastoral conversion is a process that involves accompanying, discerning and integrating weakness in order to reach people in fragile circumstances, he said. Without that conversion, “it is impossible to adopt the appropriate pastoral attitude of welcome, listening, dialogue and mercy,” said the cardinal.