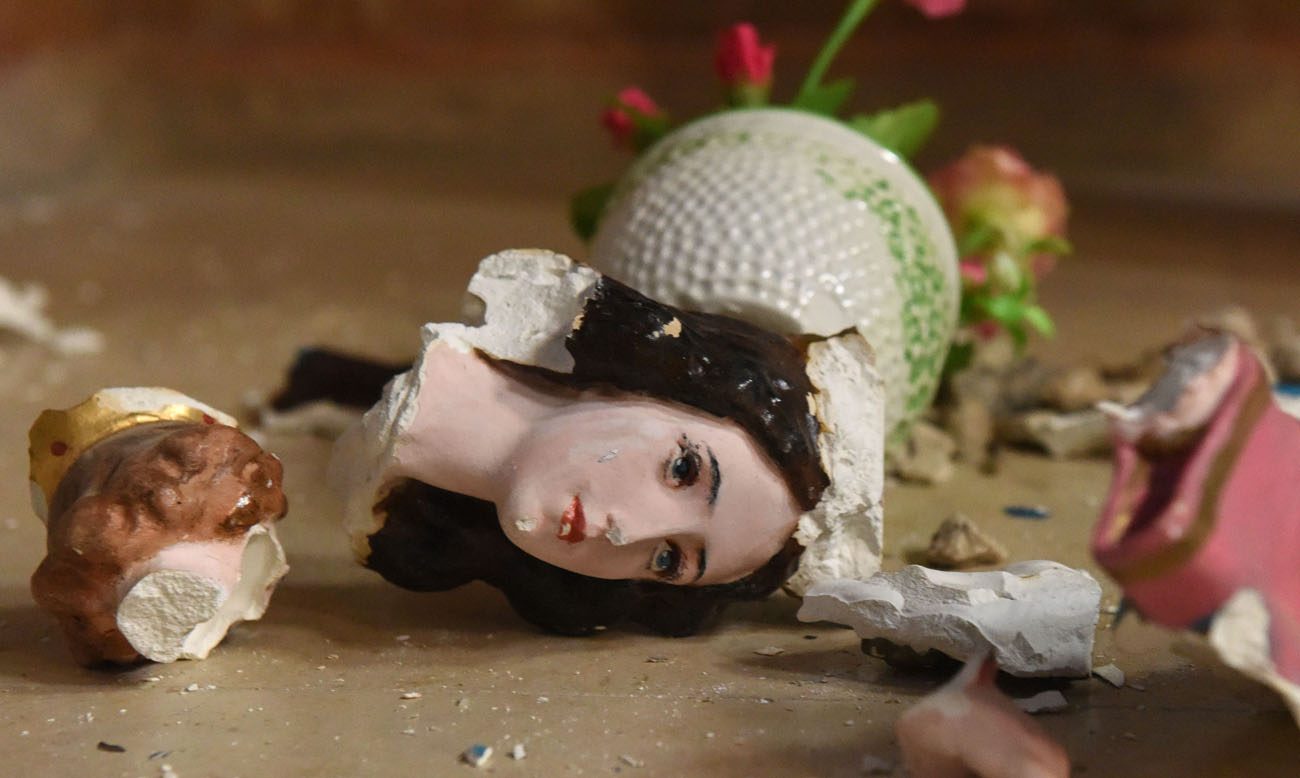 A shattered statue of Mary and the Christ Child is pictured Sept. 26 inside St. Stephen Church in the Beit Jamal Salesian monastery near Jerusalem. (CNS photo/Debbie Hill)

JERUSALEM (CNS) — Christians in the Holy Land, including Catholic leaders, have expressed frustration with lack of legal action against cases of desecration and vandalism of sacred places.

Even as the Assembly of Catholic Ordinaries of the Holy Land issued a statement condemning the Sept. 20 desecration and vandalism of a Catholic shrine in Israel, some people criticized the statement’s “weak language” and asked, “How long will we be tolerant?”

“Unfortunately, in these situations we feel how vulnerable we are,” one person wrote on Facebook.

The latest incident took place Sept. 19 at St. Stephen Church inside the Beit Jamal Salesian monastery west of Jerusalem. The monastery is open for visitors and generally has good relations with its Jewish neighbors, including the residents of an ultra-Orthodox town, said Salesian Father Antonio Scudu, caretaker of the church. Pilgrims to the church discovered the vandalism, which included a shattered statue of Mary, broken faces of figures on the stained-glass windows, and a destroyed cross.

“I was shocked,” said Father Scudu. “I didn’t expect to see something like this. The church is always open. If you see what happened, you feel they did it with hate. They smashed everything.”

It is the third time the Beit Jamal community has been vandalized in the past five years.

Israel Police spokesman Micky Rosenfeld said evidence had been collected at the site and the investigation was ongoing. He denied charges of police inefficiency in vandalism investigations.

“There have been arrests in previous cases. We are looking into this case to see if it was an individual or a group. These are all separate cases,” said Rosenfeld. “People can say what they want. This kind of case is top priority.”

He said authorities do not believe there is any connection between most of the cases nor some sort of “vandalism cell” operating against Christian and Muslim holy sites.

As in past statements, the bishops called for better education toward tolerance and coexistence.

“While we demand the state, with all its relevant bodies, to work for punishing the attackers and educate the people not to make similar offenses, we pray to the Almighty for the retreat of the attackers and hoping that all peoples, especially at our Holy Land, learn to coexist with each other in love and mutual respect, regardless to the diversities among them,” they said.

Wadie Abunassar, adviser to the Assembly of Catholic Ordinaries of the Holy Land, said there have been some 80 incidents of vandalism against churches and Christians sites over the last decade. In most of the cases, no arrests or indictments have taken place, he said. Still, he said, arresting perpetrators would not be enough to prevent such incidents from recurring. Incitement charges must also be brought against those provoking such actions — including several prominent extremist rabbis, he said.

“We get sympathy and nice words from everybody, but we are sick of that. We want convictions, not only indictments,” Abunassar said. “It is a very sad story. People are asking why we should not go demonstrate, to protest.”

He noted that Prime Minister Benjamin Netanyahu has yet to respond to several requests from the bishops to meet with him concerning the continuing vandalism.