Caritas staffers in Germany juggle duties as they help refugees 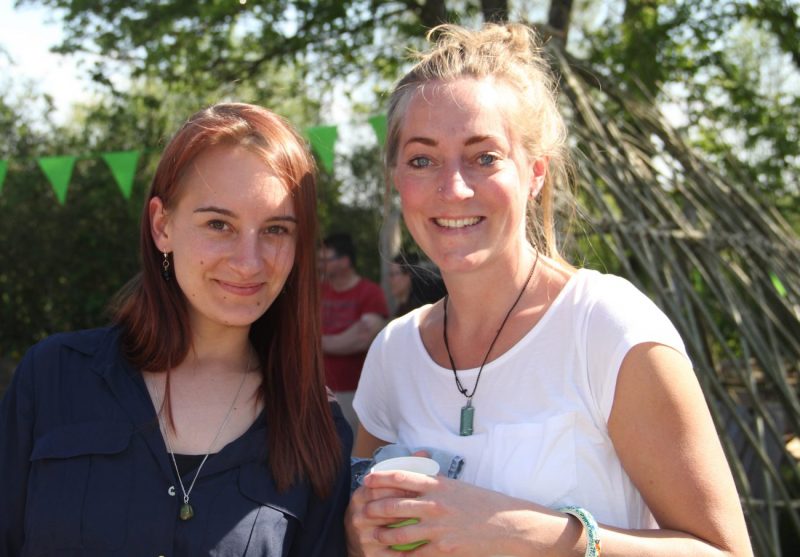 Antonia Hacker and Lisa Maisch, who work for Caritas in Stuttgart, Germany, are pictured in a 2016 photo. (CNS photo/courtesy of Caritas Stuttgart)

STUTTGART, Germany (CNS) — A young African mother calls for help to the Caritas staffer at the refugee dormitory as her toddler quickly scurries down the hallway, giggling. Unaware, Syrian and Iraqi refugees huddle outside under an awning, busy texting, as the rain pours down.

Caritas social worker Lisa Maisch said it’s all in a day’s work as she and others at the facility juggle many responsibilities, including providing care and support to refugees fleeing conflict and economic deprivation, who are often traumatized. At other times, Caritas workers find themselves having to give a motivational push to refugees to improve German language skills and pursue job prospects as a means of better integrating into a new life in the country.

“We are on the one hand social workers who give advice. On the other, we are also responsible for managing the facility,” explained Maisch, who began working with Caritas in September 2014, a year before hundreds of thousands of refugees from the Middle East and Africa flooded into Europe, with about 1 million landing in Germany.

As German Chancellor Angela Merkel seeks re-election for a fourth term of office Sept. 24, her policies on immigration have come under fresh scrutiny. Not all Germans are happy about the huge influx of foreigners from very different cultural and religious backgrounds; others are supportive of Merkel’s actions.

“People live in a tight, narrow place here,” Maisch, 31, told Catholic News Service. She spoke at the facility of stark concrete dormitories on the outskirts of Stuttgart, the affluent home to Mercedes-Benz, Porsche and Bosch.

“Because of the insecurity of their legal status and the long time spent in the facility, some people are frustrated and feel pressure,” said Maisch, whose holds bachelor and master’s degrees examining social integration for refugees. “Arguments can start with neighbors in the facility, over small things like cleaning or noise, but it quickly quiets down.”

Approximately 8,000 refugees live in and around Stuttgart, and Caritas cares for 3,000 of them. They are considered “asylum seekers,” hailing from Syria, Iraq, Iran, Afghanistan, Gambia, Eritrea, Somalia, Nigeria, Togo and Benin. The German government will determine their final status.

The Caritas facility in the leafy Mohringen district has 243 beds in three buildings, where two or three people share a clean, but cramped 49-by-15 room.

“Occasionally there are disputes, but well less than the public think,” said Antonia Hacker, who works with Maisch at the facility. “Here, we have different nationalities, different cultures, different religions.”

The application process to be considered a refugee with permission to stay in Germany can take up to three years and includes bureaucratic hurdles, causing much anxiety to those involved.

“We are really emotionally involved, having built near daily relationships with these people during this period, even though we, as individuals, are looking after a caseload of 60 or more people,” Maisch said.

“It’s a big challenge for us to explain to them what is written in a rejection letter telling them to go back,” she said, adding Caritas helps find lawyers to make an appeal, if that’s what the applicant wants.

She said a man from Gambia recently sat in her office and cried, fearing he and his wife would always be displaced and never would be settled.

“They are questioning these things every day. It’s really hard for them to cope,” Maisch said.

“Everyone has a reason for coming to Germany. It’s difficult for those who are further traumatized by the journey just getting here,” Hacker told CNS.

The 27-year-old Stuttgart native started her involvement with Caritas in 11th grade, helping homeless people, and became a staffer in 2015, aiding refugees after completing a university degree in social work.

“For instance, Germany has switched so many times between citing Afghanistan as an ‘unsafe’ or ‘safe’ country, so it’s hard for people to keep learning German if they don’t know if they will be allowed to stay,” Hacker explained.

She said family reunification has its own difficulties. The German government has not permitted the reunion of a 19-year-old Iraqi girl with her mother, who has refugee status, because the girl is considered a legal adult in the West. However, a single woman her age would not be allowed to live alone in the Middle East.

“These kinds of things are difficult for me to understand, and I can’t explain it to the people,” Hacker said. “Sometimes I get angry and call the officials asking them why, saying they are family. But the authorities say she is over 18.”

Although their colleague, Joachim Glaubitz, said he deals exclusively with those refugees who are allowed to remain in Germany, he sees the challenges with family reunion.

“Refugees are afraid for their families, constantly thinking about them. This can make it difficult for them to get a good start,” Glaubitz, Caritas refugee counselor in Heilbronn, just north of Stuttgart, told CNS. “They always ask me to make it faster and to help them. But it’s not possible to make it faster.”

“Successful integration depends on the individual and where they are living in Germany. Language learning skills make it easier to find a job. There are problems, but many good examples, too,” Glaubitz added.

“These people have a lot of patience. They say, ‘Thank you for letting me be here. Please leave me here because I am safe here. Thank God, I can be here.’ I am surprised by the atmosphere,” Hacker said. “They are happy, thankful and good.”

NEXT: Pope prays for victims of Mexico quake