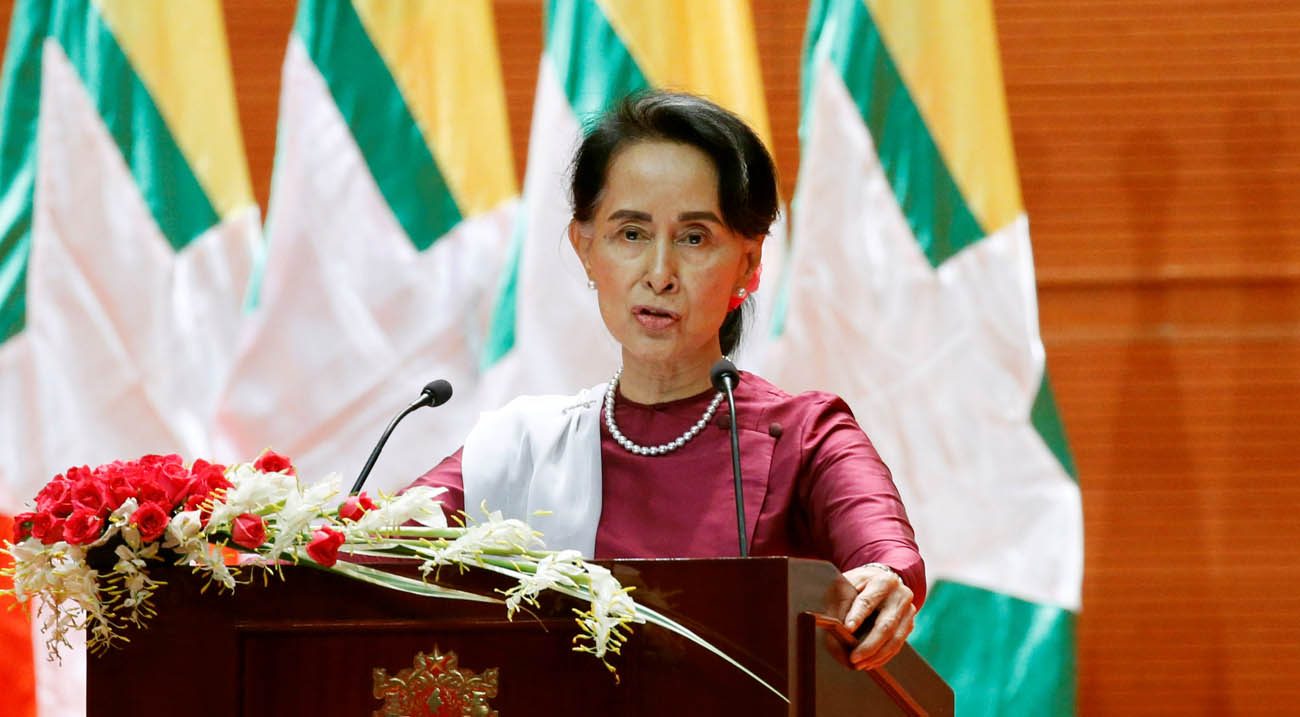 “We condemn all human rights violations and unlawful violence,” said Suu Kyi, state counselor and foreign affairs minister. “We are committed to the restoration of peace, stability and rule of law throughout the state.”

Ucanews.com reported more than 410,000 Rohingya have fled to Bangladesh since Aug. 25, when the military retaliated after the Arakan Rohingya Salvation Army attacked police posts and an army base.

Calling out the group as terrorists was the only time Suu Kyi used the word Rohingya, ucanews.com reported.

The half-hour address was greeted with either muted praise or dismissal by Western governments, Muslim nations and aid groups.

“While it was positive to hear Aung San Suu Kyi condemn human rights violations in Rakhine state, she is still silent about the role of the security forces,” Amnesty International said.

The speech was welcomed by China, Myanmarese citizens in Yangon and other cities.

In her speech, Suu Kyi explained how Myanmar could assist Rohingya refugees in Bangladesh willing to return to Rakhine.

“We are prepared to start a refugee verification process for those who wish to return,” Suu Kyi said. She added those verified as refugees will be accepted without any problem and have full assurance of security and access to humanitarian aid, referred to in a 1993 principle agreed between Bangladesh and Myanmar.

In the past, 200,000 Rohingya refugees returned to Myanmar under that agreement, yet tens of thousands remained in Bangladesh, unable to produce sufficient documentation to pass through the process that was run by the U.N. High Commissioner for Refugees.

Kyaw Min, chairman of Democracy and Human Rights, the Yangon-based Rohingya party, said it would be difficult for refugees to show documents of their status from Myanmar because they fled for their lives in awful conditions.

“Thousands of Rohingya who fled Rakhine state due to fear actually want to come back, but it is up to the government on how willing they are to accept them,” Kyaw Min told ucanews.com.

Nyan Win, spokesman for the ruling National League for Democracy, said refugees in Bangladesh will need documents of their refugee status from Myanmar to accept them.

“The process will be taken with a step by step by collaboration between the governments of Myanmar and Bangladesh,” Nyan Win told ucanews.com.

Kyaw Nyein, a Yangon-based non-Rohingya Muslim leader and a lawyer, said Suu Kyi’s announcement was positive, but there were other issues that need to be addressed, mainly the 1982 citizenship law, which effectively makes the Rohingya stateless. The law does not recognize the Rohingya as one of the country’s 135 recognized ethnic groups.

Myanmar’s government and military — along with many citizens — refer to the Rohingya, who number up to 1.1 million, as “Bengalis,” claiming they come from neighboring Bangladesh.

“What I understand is that verification for refugees’ status as per the 1993 principle is the effort of solving the problem politically between Myanmar and Bangladesh governments. But the government of Myanmar will stick to the controversial 1982 citizenship law,” Kyaw Nyein told ucanews.com.

A group of political parties, led by the Union Solidarity and Development Party, the political arm of the military, has called for martial law to be declared in northern Rakhine. So far Suu Kyi has resisted but reports in Myanmar have said there is fresh pressure on political leaders.

During her speech, Suu Kyi appealed to international diplomats to “join us” and help Myanmar find a lasting solution to all the conflicts and the raft of other problems that continue to roil the largely impoverished nation. Following the speech, she held a two-hour closed-door meeting with international diplomats.

PREVIOUS: In Bolivia, when the water dries up, so does the economy

NEXT: Caritas staffers in Germany juggle duties as they help refugees