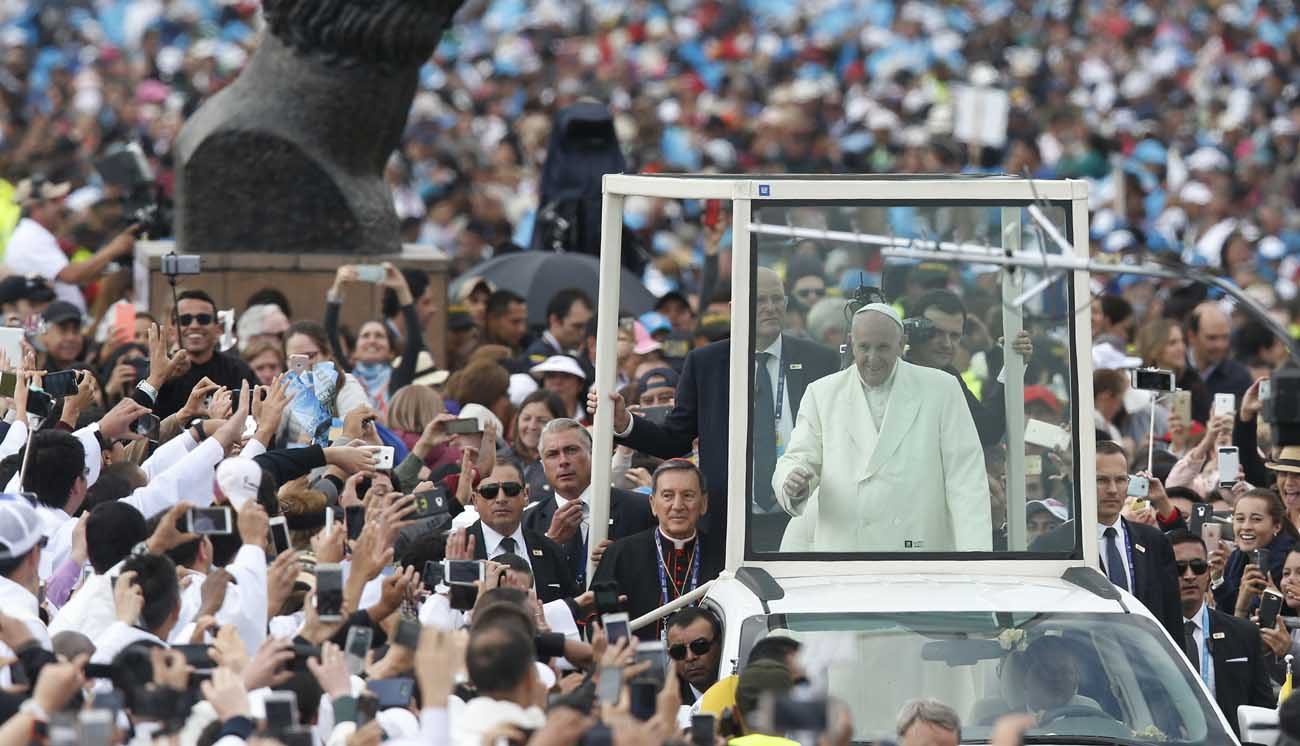 BOGOTA, Colombia (CNS) — Consolidating peace in Colombia will mean overcoming “the darkness” of inequality and a lack of respect for human life, Pope Francis said.

“Here, as in other places, there is a thick darkness which threatens and destroys life,” the pope said in his homily at a late-afternoon Mass Sept. 7 in Bogota’s Simon Bolivar Park.

Colombian authorities said more than 1.1 million people gathered in the park for the Mass. Many of them were soaked in a rainstorm before the pope arrived, but as Mass began, bits of blue sky began to appear.

Still, preaching about the Gospel story of Jesus’ first encountering Simon Peter after the fishermen had fished all night without luck, Pope Francis spoke about the “turmoil and darkness” of the sea as a symbol for “everything that threatens human existence and that has the power to destroy it.”

For Colombia, just starting to recover from more than 50 years of civil war, and for many other nations as well, the pope said, the threats come from “the darkness of injustice and social inequality; (and) the corrupting darkness of personal and group interests that consume in a selfish and uncontrolled way what is destined for the good of all.”

In society, in politics and in the church, Pope Francis said, people can get “tangled up in endless discussions” about what went wrong and whose fault it is. But the only way forward is to follow Jesus, obeying his command to cast out the nets, which means taking responsibility for personal conversion and changing the world.

“Jesus invites us to put out into the deep, he prompts us to take shared risks, to leave behind our selfishness and to follow him,” Pope Francis told the crowd, which included Colombia’s President Juan Manuel Santos and his wife.

Jesus wants people to leave behind their fears, “which paralyze us and prevent us (from) becoming artisans of peace, promoters of life.”

The people of Colombia, he said, are called to continue their conversion to peace and respect for all the nation’s people. That can happen only by promoting unity, “working for the defense and care of human life, especially when it is most fragile and vulnerable: in a mother’s womb, in infancy, in old age, in conditions of incapacity and in situations of social marginalization.”

Jesus calls people “out of darkness and bring us to light and to life,” the pope said. “He calls everyone, so that no one is left to the mercy of the storms,” asking the strong “to carry the most fragile and promote their rights.”

After the Mass, Pope Francis was scheduled to greet bishops from neighboring countries, including from Venezuela, which is in the midst of a social, political and economic crisis.

He said the bishops also wanted to tell the pope more about “the serious political situation, because the government is doing everything possible to establish a state system, totalitarian and Marxist.”

Cardinal Porras added, “I think that this meeting is a real gift that the pope is giving to all of the Venezuelan people through the bishops who are here.”