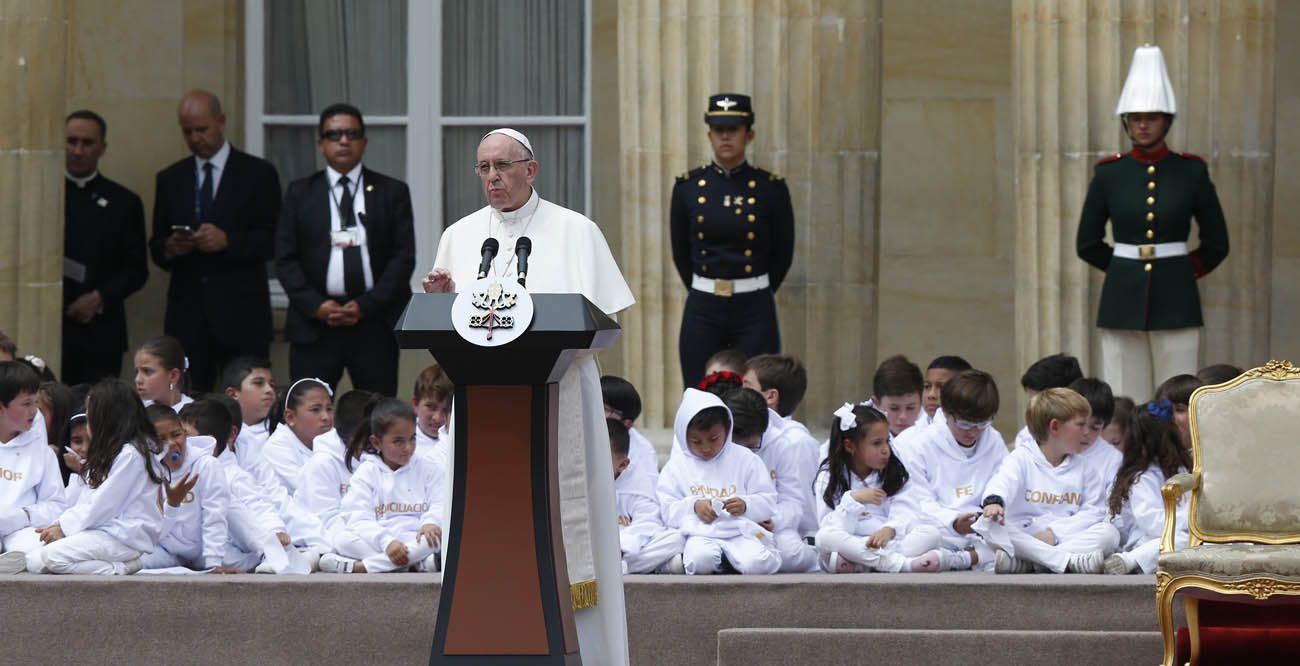 Pope Francis addresses the audience during a meeting with Colombian President Juan Manuel Santos and other government authorities in the courtyard of the presidential palace in Bogota, Colombia, Sept. 7. (CNS photo/Paul Haring)

BOGOTA, Colombia (CNS) — Pope Francis urged Colombians to put aside prejudice and pursue peace through social inclusion, fighting inequality and paying attention to the plight of the country’s most marginalized populations, such as campesinos, Afro-Colombians and indigenous peoples.

Speaking alongside President Juan Manuel Santos, the pope called on Colombians to recognize that “real wealth is diversity” and to pursue a “culture of encounter,” in which people are at the center of all political, social and economic activity. Promoting such a culture would “help us flee from the temptation of revenge and the satisfaction of short-term partisan interests.”

“I encourage you to look to all those who today are excluded and marginalized by society, those who have no value in the eyes of the majority, who are held back, cast aside. Everyone is needed in the work of creating and shaping society. This is not achieved simply with those of ‘pure blood,’ but by all,” the pope told Santos and government officials Sept. 7 outside the Casa de Narino, Colombia’s presidential palace.

“Please … listen to the poor, to those who suffer,” he added. “Look them in the eye and let yourselves be continually questioned by their faces racked with pain and by their pleading hands. From them we learn true lessons about life, humanity and dignity.”

The speech — invoking St. Peter Claver, a Jesuit who fought discrimination and the slave trade in Colombia — was Pope Francis’ first official event on his five-day visit to the South American country.

Pope Francis arrived in Colombia as the country pursues peace after five decades of armed conflict. That conflict has claimed 220,000 lives and left millions more victimized and displaced. Many of those victims came from the poorest strata of Colombian society.

“Our gaze fixes upon the weakest, the oppressed and maltreated, those who have no voice, either because it has been taken from them, or was never given to them, or because they are ignored,” the pope said, as children sat behind on a platform in front of the presidential palace columns.

The pope also emphasized the importance of family — “envisioned by God to be the fruit of spousal love” — as a source of social cohesion and “that place where we learn to live with others despite our difference and to belong to one another.”

Colombia’s government and a Marxist guerrilla group, the Revolutionary Armed Forces of Colombia, or FARC, reached a peace accord last year. The FARC is demobilizing and recently formed a political party. Another Marxist group, the National Liberation Army, is in talks with the government and agreed to a four-month cease-fire in the days before the pope’s arrival.

The peace accord with the FARC has proved polemic; some in Colombia disapprove of FARC leaders receiving reduced punishments for committing atrocities and fear the presence of former guerrillas in the country’s political process.

Pope Francis has not specifically endorsed the peace accord, but he saluted the process of bringing peace to Colombia.

“Over the past year, significant progress has been made. The steps taken give rise to hope, in the conviction that seeking peace is an open-ended endeavor, a task which does not relent, which demands the commitment of everyone,” Pope Francis said. “It is an endeavor challenging us not to weaken our efforts to build the unity of the nation.”

Santos, who has promoted the peace accord in the face of stiff opposition, called the pope’s visit a “push” to take the first steps toward peace and reconciliation.

“It’s no use silencing our weapons if we continue armed in our hearts,” the president said. “It’s no use ending a war if we still pursue each other as enemies. That’s why were need to reconcile.

“We trust your visit will open the hearts and minds of Colombians to the peace that comes from God and inhabits the souls of men. This is the peace we are constructing,” he told the pope.

Pope Francis ended by telling the country, “you have a great and noble mission, which is also a difficult task,” then quoting Colombian author Gabriel Garcia Marquez: “In spite of this, before oppression, plundering and abandonment, we respond with life. Neither floods nor plagues, famines nor cataclysms, nor even the unending wars down the centuries, have been able to subdue the tenacious advantage of life over death. An advantage which is both increasing and accelerating.”

NEXT: Colombia youths must teach elders to forgive, to move on, pope says