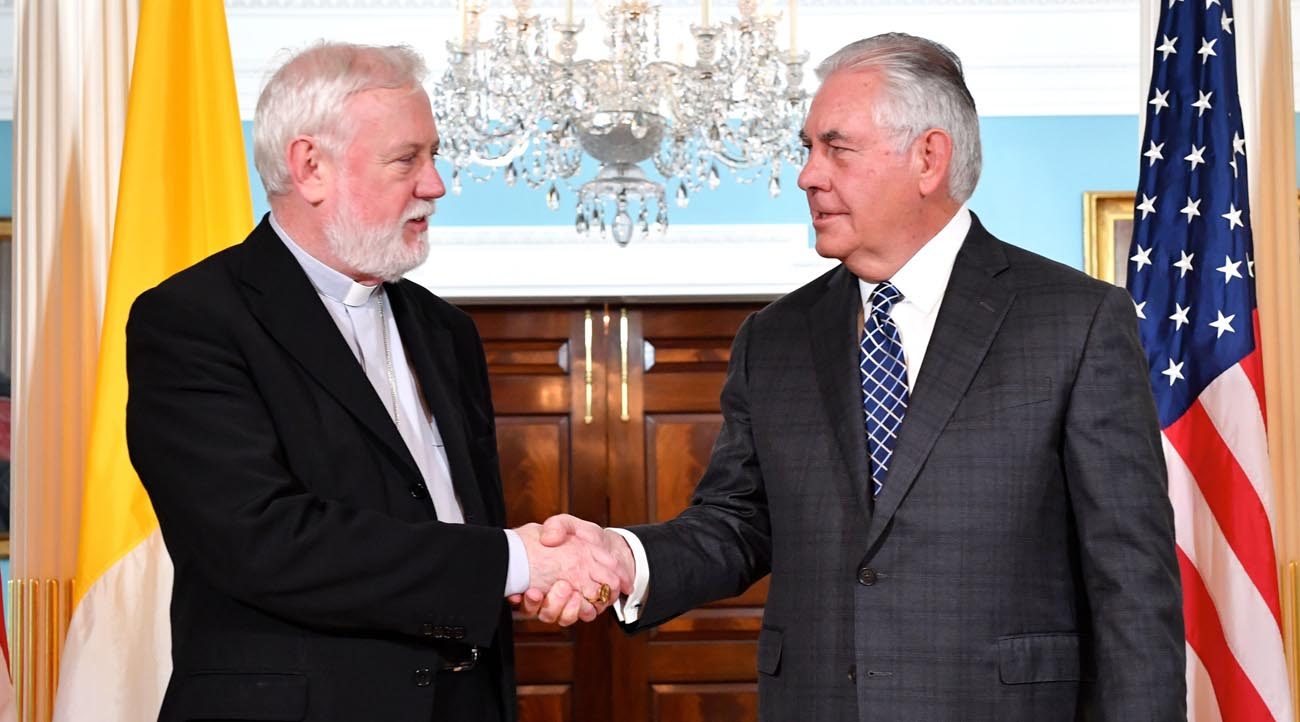 UNITED NATIONS (CNS) — A Vatican official called on the world’s governments to strive more actively to prevent wars, protect human dignity and the environment and work toward a nuclear-free world.

During an address to the United Nations General Assembly Sept. 25, Archbishop Paul Gallagher, Vatican foreign minister, also described the right to life and freedom of religion as pillars of peace and development, allowing human rights to flow from them.

He addressed the drug trade, trafficking in persons and the importance of protecting innocent people from violence and war in his wide-ranging speech that echoed numerous concerns raised by Pope Francis during his pontificate.

“Putting people always first means protecting, at every stage and in every circumstance, the dignity of the person and its human rights and fundamental freedoms,” Archbishop Gallagher said. He called such protections “the common foundation of peace and security and integral human development.”

“These two human rights are indivisible from those other rights and fundamental freedoms relating to a dignified spiritual, material and intellectual life for each citizen and for their families, among others, the right to food, the right to water, the right for housing, the right to safe environment and the right to work,” he said.

Calling the U.N.’s 2030 Agenda for Sustainable Development and the Paris agreement on climate change two signs of hope for the world, Archbishop Gallagher also urged the world’s governments to do more to implement the legal and political commitments contained in them.

Implementing the agreements, he said, “could be a way of focusing all countries and international organizations on working together for peace, leaving aside the dangerous game of exchanging threats.”

All nations have a duty to prevent war and violent conflicts that harm innocent civilians, the archbishop continued. He said the prevention of violence requires faith that negotiations to ease tensions can be fruitful.

“An environment of trust is urgently needed. All countries should take a decisive and urgent step back from the present escalation of military preparations. The largest countries and those who have a stronger tradition of respecting human rights should be the first to perform generous actions of pacification. All the diplomatic and political means of mediation should be engaged to avoid the unspeakable,” Archbishop Gallagher stressed.

He called for a renewed emphasis by all governments on the importance of protecting populations from “genocide, war crimes, ethnic cleansing and crimes against humanity.”

The war in Yemen is of particular concern and the “tragedy from the war in Syria continues to grow every day,” the archbishop said. He also said political divisions and instability in Venezuela as well as tensions in the Arabian Peninsula, the Middle East, Ukraine, South Sudan and Central African Republic pose threats to the well-being of citizens in those countries in calling on the world to seek peaceful alternatives to war and violence.

“Our common humanity impels us all, as Pope Francis has proposed, to welcome, to protect, to promote and to integrate those who flee from such adverse conditions,” Archbishop Gallagher told the General Assembly delegates. “These four actions are based on the proposition that migrants, in spite of many real or imagined challenges, are a good for society, and on the principle of solidarity with those in need.”

He said the Holy See will work to ensure that the four actions will be included in the global compact for refugees the U.N. will consider in September 2018.

Archbishop Gallagher cited the need to more fully address the “evil” of human trafficking and the heinous nature of the drug trade in many countries around the world.

Human trafficking involves “the utter loss of respect for human dignity and the total indifference to the sufferings of fellow human beings. Modern slavery happens when ‘people are treated like objects,’ he explained. The archbishop called for a stronger focus on efforts to end human trafficking, saying “putting people first” ought to be the primary concern of the U.N.

In addition, Archbishop Gallagher called for an end to the arms trade — licit and illicit — around the world. “The proliferation of arms, including weapons of mass destruction, among terrorist groups and other nonstate actors has become a real danger,” he said.

He did not leave nuclear powers untouched, saying that these countries must lead the effort toward disarmament, including nuclear disarmament, and arms control.

“The proliferation of weapons simply aggravates situations of conflict and results in unimaginable human suffering and material costs, profoundly undermining development, human rights and the search for lasting peace,” the diplomat said. “Without greater international and regional cooperation, especially among weapons-producing states, to control and limit strictly the production and movement of weapons, a world free of wars and violent conflicts will surely remain an illusion.”

Archbishop Gallagher noted that the Holy See has signed the Treaty on the Prohibition of Nuclear Weapons approved by the U.N. in July. He said that while much remains to be done for the treaty to take effect, “the Holy See believes that it is one more blow on the anvil toward the fulfillment of the prophecy of Isaiah: ‘They shall beat their swords into plowshares and their spears into pruning hooks; one nation shall not raise the sword against another, nor shall they train for war again.'”

During a photo opportunity, Tillerson was asked about U.S. relations with North Korea.

“We’re going to continue to pursue our diplomatic efforts and hope that’s the way we’ll solve this,” Tillerson replied.

NEXT: Holy Land Christians frustrated by lack of legal action against vandals