In Bolivia, when the water dries up, so does the economy 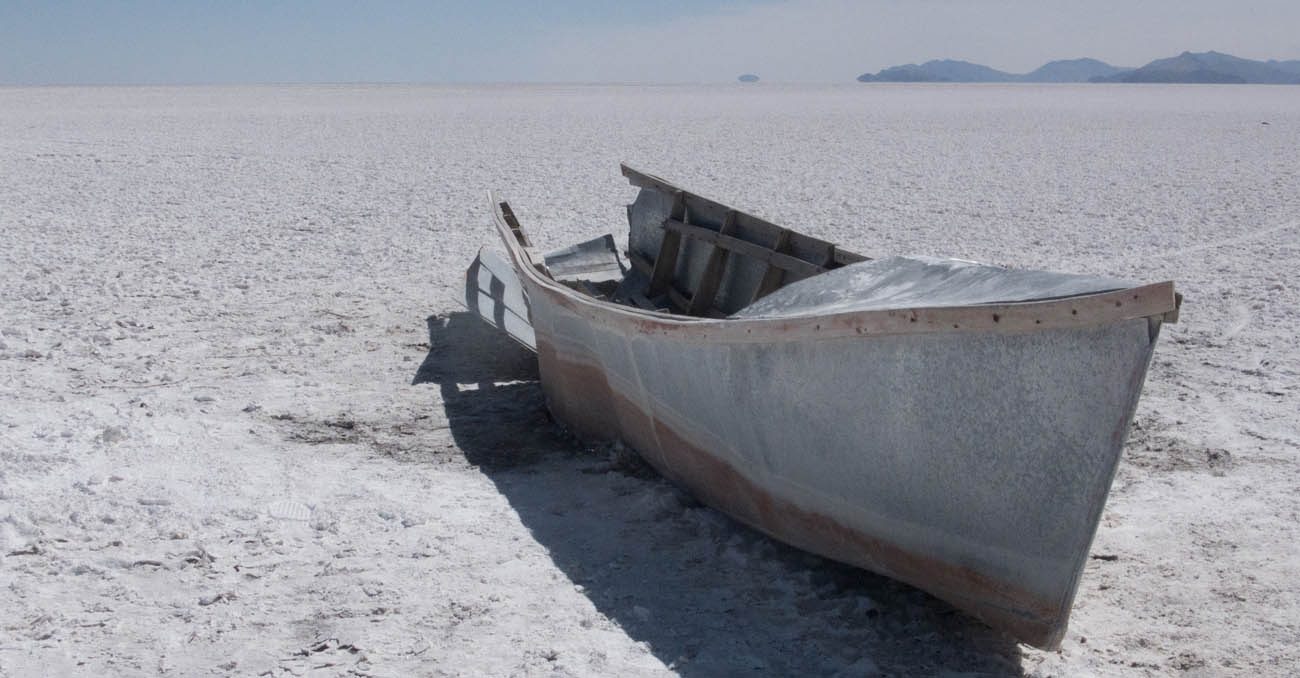 An abandoned boat lies several hundred feet from the shore of Lake Poopo in late August, testimony to the disappearance of the lake and the salt flats that remain in Llapallapani, Bolivia. Lake Poopo dried up three years ago, and 30 million fish died almost overnight. (CNS photo/Glen Argan)

Lake Poopo dried up three years ago, and 30 million fish died almost overnight. Along with the fish went the livelihood of the residents of a few dozen Aymara and Uru communities, whose people have fished the lake for centuries.

Especially in the Lake Poopo region, the water shortage has driven roughly half the inhabitants away to seek work elsewhere.

Back at Lake Titicaca, the world’s highest navigable lake, the fishery remains active but, nearby, agricultural communities are crying for water. Lack of water in the high-altitude Altiplano — average elevation: 12,750 feet — is both chronic and increasing in intensity. Annual rainfall in the key Lake Titicaca region is declining, while some areas of the Altiplano rarely receive more than eight inches of rain a year.

The 8-year-old Bolivian constitution made access to water a fundamental right, but local leaders say the right is more talk than action.

However, community groups, supported the Canadian church’s Development and Peace agency, are doing what they can to bolster local economies and preserve traditional cultures. A delegation of 14 Western Canadian supporters of Development and Peace visited Lake Poopo in mid-August to gain insight into the full extent of the problems and to witness the efforts local groups are making to provide hope for the future.

At Llapallapani, on the shores of the former Lake Poopo, leader Gregorio Rios Valero says there is no work.

The village’s mayor, Dionicio Choque Mamani, said he hopes the local economy can be restored through tourism or perhaps through extracting salt from the heavy clay that was once the lake bottom.

Choque paid tribute to help that Llapallapani receives from the Center for Ecology and Andean People. CEPA, as it is known, provides training for youth and pays the way for local leaders to attend workshops in the city of Oruro, a two-hour drive north.

Going to workshops may not seem like much, but the indigenous leaders are learning to advocate for themselves, having successfully pushed to have a small trout farm built in their village. They also have asked state and national authorities to give Lake Poopo its fair share of the water flowing from Lake Titicaca.

CEPA has encouraged the development of a local arts and crafts industry in which women and children weave small handicraft boats and other items out of local grasses.

Any hopes for agricultural development appear to have been dashed because of a land shortage and the widespread belief that the Uru are “people of the water,” thus having no claim to any land.

CEPA has drawn significant media attention to the problems of Lake Poopo. On the day the Canadian Catholics visited, local reporters were out in force. The story was at the top of the front page of the Oruro daily newspaper the following day, with further coverage inside.

Clemente Paco Huanca, director of CEPA, said the 22-year-old organization works collaboratively with local groups across the Oruro department to demand environmental justice, not only through greater access to water, but also to environmental contamination, especially from the mining industry.

In Ancoraimes, Mayor Zenon Ramos Mamani said groundwater levels have fallen. Only a few years ago, one could strike water by drilling down six feet. Now one must dig 20 feet below ground level.

The change has had a detrimental effect on agricultural production, the mayor said.

As well, there are serious problems of contamination, especially with solid waste, Ramos said.

“We are causing damage to our sacred lake due to lack of awareness of how to deal with environmental issues,” he said.

The Nuna Foundation, an organization partially funded by Development and Peace, is dedicated to increasing economic production as well as political analysis and advocacy in the villages near Lake Titicaca.

One elderly couple received a new trough to feed their livestock. The trough had its own water tap, saving the couple the grueling daily task of having to haul water.

Wilder Mendoza, a Nuna official, said the electric pump will provide water for other buildings and for the villages’ growing garden business. Nuna also purchased a water tank so one family can have a stable supply of water adjacent to its home.

Yet another home has a sprinkler watering its walled-in garden, the wall having been designed to keep out animals, prevent soil runoff and create a warmer micro-climate.

One family received a new room for hygienic manufacturing of yogurt and cheese; greenhouses have been built for another family so they can get an early start in the crisp highland air to grow crops such as strawberries, carrots, onions, cabbages and beets.

Villagers are encouraged to restore traditional practices, such as composting and terracing, to give the soil a better chance to maintain its fertility. Yet, water remains the most important need.

As the Canadians departed the two villages for the next stop on their Bolivian journey, one elderly woman touched the arm of a young visitor.

Argan is the former editor of the Western Catholic Reporter in Edmonton, Alberta. A portion of the costs of his trip were covered by Development and Peace.