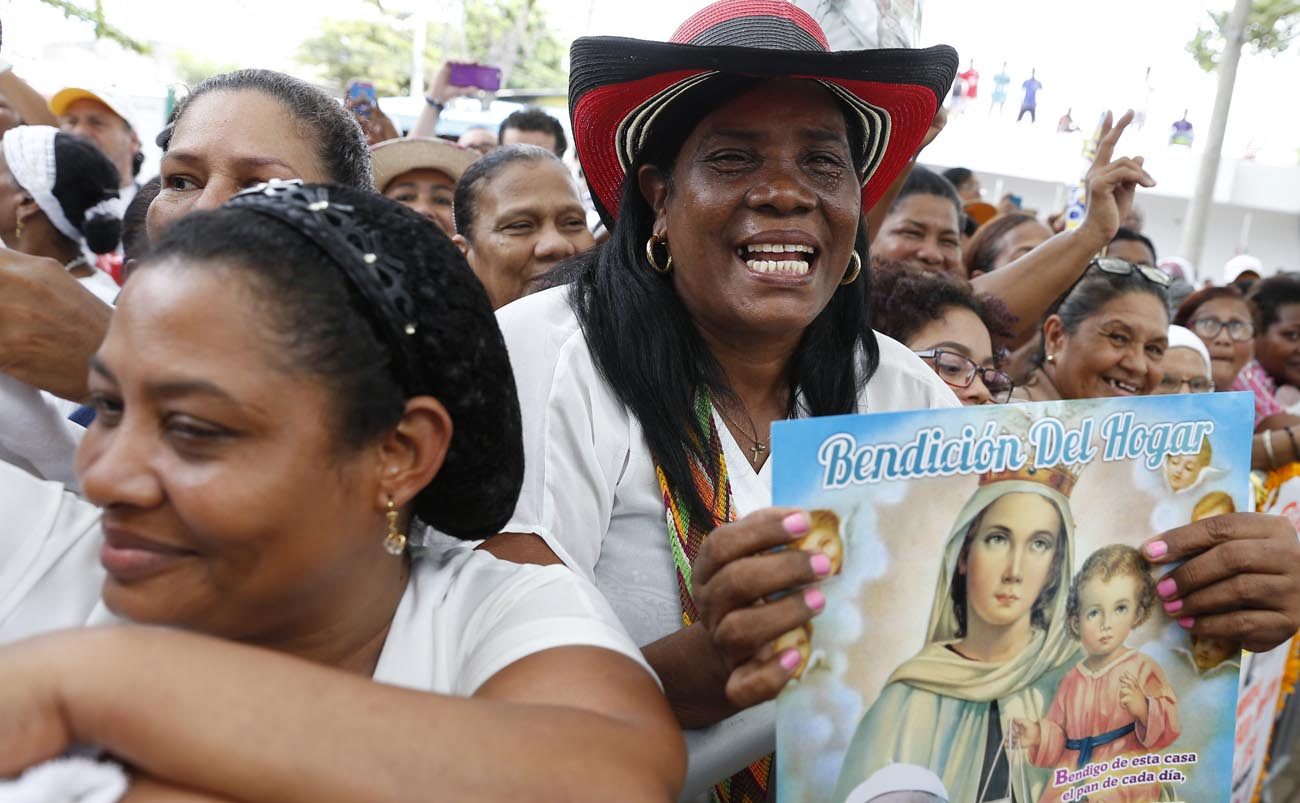 CARTAGENA, Colombia (CNS) — At the Church of St. Peter Claver, a saint venerated throughout the Americas as a champion of human rights, Pope Francis offered special prayers for Venezuela and its people suffering in the midst of a huge political and economic crisis.

“From this place, I want to assure my prayers for each of the countries of Latin America, especially for nearby Venezuela. I expressed my closeness to each of the sons and daughters of this beloved nation, as well as for those who have found in Colombia a place of welcome,” he said Sept. 10 in Cartagena.

Venezuela has been torn by violence and stricken with severe shortages of food and medicine as its political crisis drags on. More than 100 people have died in protests as President Nicolas Maduro has attempted to install a constituent assembly to rewrite the nation’s constitution and consolidate his power.

“From this city, the seat of human rights, I call for the cessation of every kind of violence in political life,” the pope said. He expressed hope for a peaceful solution to the “grave crisis” Venezuela is experiencing and which affects all its citizens, “especially the poorest and most disadvantaged in society.”

Driving through the streets of the Caribbean coastal city, the popemobile braked suddenly, and Pope Francis hit his head. A big bump appeared quickly on his left cheekbone and a few specks of blood from his scratched eyebrow stained his white soutane.

After a quick treatment with ice, according to the Vatican, the pope was back in the popemobile making his way to the Church of St. Peter Claver, the Jesuit who devoted the last 40 years of his life to caring for and ministering to African slaves.

Earlier, arriving from Bogota for the last day of his five-day visit, Pope Francis went to one of Cartagena’s poorest neighborhoods, where he blessed the cornerstone for a series of houses for particularly vulnerable people: the homeless and victims of trafficking.

The homes are sponsored by Talitha Kum, an international network to fight trafficking; the network is sponsored by the women’s and men’s international unions of superiors general. The pope also visited the home of Lorenza Perez, 77, who has worked for decades as a volunteer cook at a church-run soup kitchen.

Pope Francis told the crowd outside St. Peter Claver Church that the two stops “have done me much good because they demonstrate how the love of God is made visible each day.”

In his main Angelus address, he spoke of the story of Our Lady of Chiquinquira, a venerated image of Mary. Painted in 1560, the image was damaged by rain and forgotten. But a few years later, a local woman found it. Pope Francis said, “She had the courage and faith to put this blurred and torn fabric in a special place, restoring its lost dignity. ”

Before entering the church and praying silently before the relics of St. Peter Claver, Pope Francis spoke about him, as well.

The Jesuit, who arrived in Colombia in 1610, would go to the port when the slave ships came in. He would visit the slaves on the boats and in the cells where they were held before being sold, bringing them food, treating their wounds and teaching them about Jesus.

“He often ministered to these slaves simply through evangelizing gestures,” the pope said, because he did not know their languages and they did not know Spanish. However, “he knew that the language of charity and mercy was understood by all. Indeed, charity helps us to know the truth, and truth calls for acts of kindness.”

Tying the morning events together, Pope Francis said, “Here in Colombia and in the world millions of people are still being sold as slaves; they either beg for some expressions of humanity, moments of tenderness, or they flee by sea or land because they have lost everything, primarily their dignity and their rights.”

NEXT: In Caribbean Colombia, Jesuits try to continue legacy of St. Peter Claver