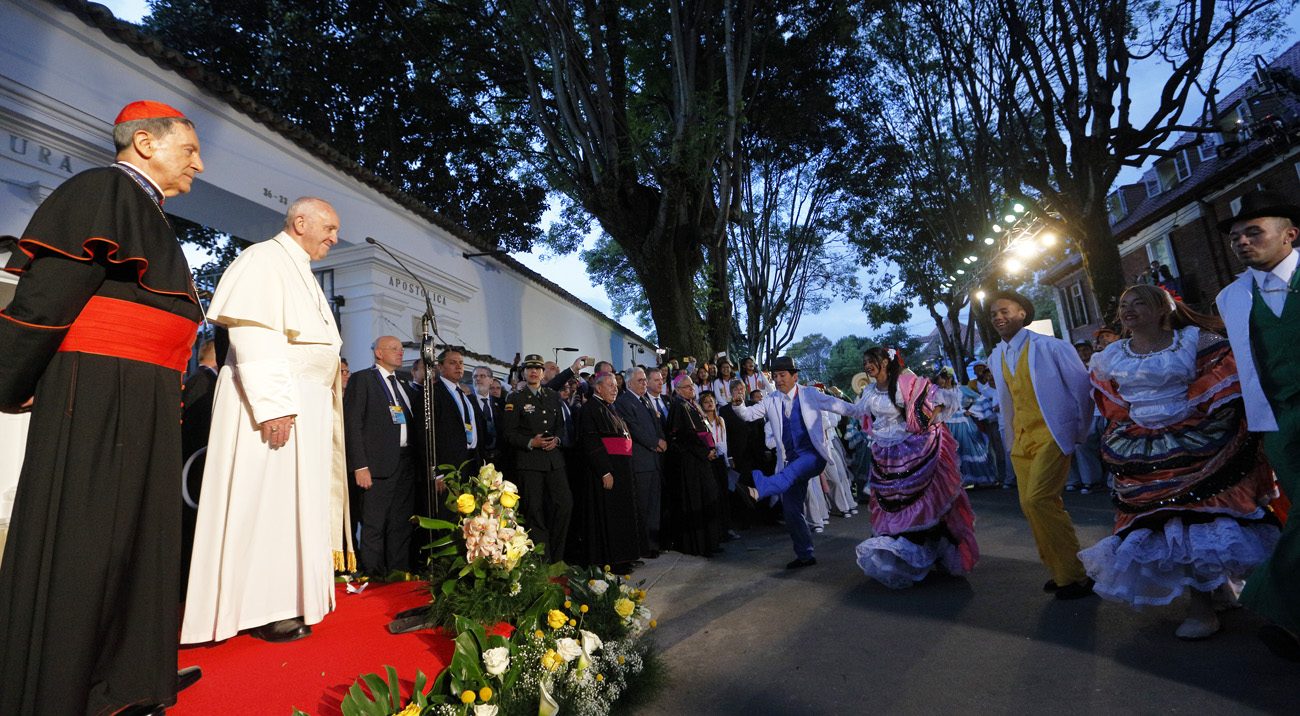 BOGOTA, Colombia (CNS) — Pope Francis arrived in Colombia Sept. 6 for a five-day visit to promote reconciliation in a deeply Catholic country scarred and reticent to offer forgiveness after decades of war.

Colombian President Juan Manuel Santos and his wife, Maria Clemencia Rodriguez Munera, welcomed the pope at the airport. Children in traditional costumes presented him with flowers, and the pope greeted members of the Colombian military, including soldiers injured in the line of duty.

In a gesture to promote the themes of peace and reconciliation, he was given a dove by a boy named Emmanuel, who was born in a guerrilla camp to Colombian politician Clara Rojas, kidnapped in 2002 and released nearly six years later.

With no speeches at the airport, Santos walked Pope Francis to a shiny new popemobile made in Colombia for the occasion. The pope rode 10 miles to the Vatican nunciature in the open-sided vehicle, slowing or completely stopping frequently to greet the hundreds of thousands of people who lined the streets.

At the nunciature, an estimated 2,000 people gathered on the sidewalks, street and on a large makeshift stage to give him a rousing welcome in song and dance.

Each evening of the pope’s visit was to feature different groups meeting the pope outside the nunciature, where he is staying. The first night featured a group of Catholic couples and priests who reach out to families in difficulty and a choir, band and dance troop formed by “at-risk youths,” many of whom had lived on the streets or struggled with drug addiction.

Pope Francis thanked the young people for their happiness, joy and enthusiasm, but especially for the efforts they have made to overcome their pasts. “This is called heroism,” he told them. 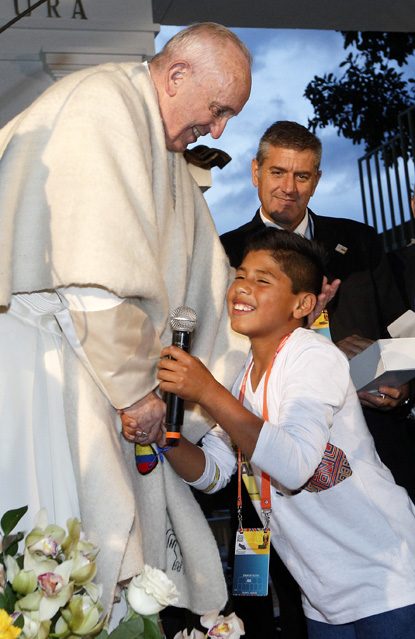 The young people gave the pope a “ruana,” a thick wool poncho, which he promptly put on. The organization the youths belong to told the press that the ruana was meant to symbolize both Colombia’s warm embrace of Pope Francis, but also the toil and commitment of the youths who work in the group’s artisan program.

On the 12-hour flight from Rome, Pope Francis told reporters that the trip was “to help Colombia go forward in its journey of peace.”

Expectations for Pope Francis’ visit were running high among Colombian Catholics. It was the first papal trip to Colombia since 1986, when St. John Paul II visited.

Pope Francis arrived after the signing of a peace accord promising to put Colombia on a path of ending more than 50 years of armed conflict. Just days before the visit, the government and the National Liberation Army, a Marxist organization carrying out crimes like kidnapping and bombings, agreed to a four-month cease-fire.

Challenges remain, especially as many Colombians — including Catholics and those of conservative persuasions — object to the idea of demobilized Marxist guerrillas accused of atrocities receiving reduced punishments and even participating in politics. Those persecuted by paramilitaries voice similar misgivings.

“We are expecting that the pope brings a lot of hope,” said Msgr. Hector Fabio Henao, director of Caritas Colombia. “The pope arrives at a time when reconciliation is the greatest challenge. We hope that his message touches the hearts of those who have suffered due to this conflict.”

The papal trip carries the motto: “Let’s take the first step,” purposely chosen to convey a sense of collective involvement in the country’s peace process.

“The motto of the apostolic trip says exactly what we are expecting: Let’s take the first step,” said Auxiliary Bishop Juan Carlos Cardenas Toro of Cali. “This first step by the pope, stepping off the flight to come closer to this nation, which has suffered, is something for us that opens the door to hope.”

The Colombian government and Revolutionary Armed Forces of Colombia, known by its Spanish acronym as FARC, reached a peace accord in 2016, in which the FARC agreed to demobilize. The agreement has proved polemical, even though violence perpetrated by guerrilla groups, government soldiers and paramilitaries has left an estimated 220,000 dead and millions more displaced.

Catholics are divided on the peace accord, and Colombian bishops have stayed on the sidelines, while encouraging the laity to voice their opinions. Many conservative Catholics, along with evangelicals, argued the deal included provisions harmful to the traditional family — a charge denied by peace accord proponents; opponents turned out to defeat the deal in a plebiscite.

The accord later was reworked and approved in Congress. People say they want peace, but disagree — often strongly — on how to pursue it.

“The church itself reflects the divisions in Colombian society,” said Jesuit Father Mauricio Garcia Duran. “The pope comes to Colombia in a context of polarization.”

The papal visit touches on themes important to the country and church. In the capital, Bogota, Sept. 7, the pope was to celebrate a Mass focused on young people. Up to 1 million people were expected to attend.

The pope was to travel Sept. 8 to Villavicencio — gateway to the at-times neglected southern half of Colombia — where he was to pray with 6,000 victims of violence and was expected to call for reconciliation. That call for reconciliation was to include a call to reconcile with creation; indigenous peoples from the Amazon and lands increasingly exploited by mining and natural resource extraction were invited.

The following day, Pope Francis was to address clergy and religious in the city of Medellin. He also was scheduled to visit a Catholic orphanage.

Pope Francis was to end his visit to Colombia on the Caribbean coast in the city of Cartagena. There he was expected to address the church’s controversial role in the slave trade.

He also was to recite the Angelus at a shrine to St. Peter Claver, a Jesuit who worked to stop slavery.

Contributing to this story was Cindy Wooden in Bogota. 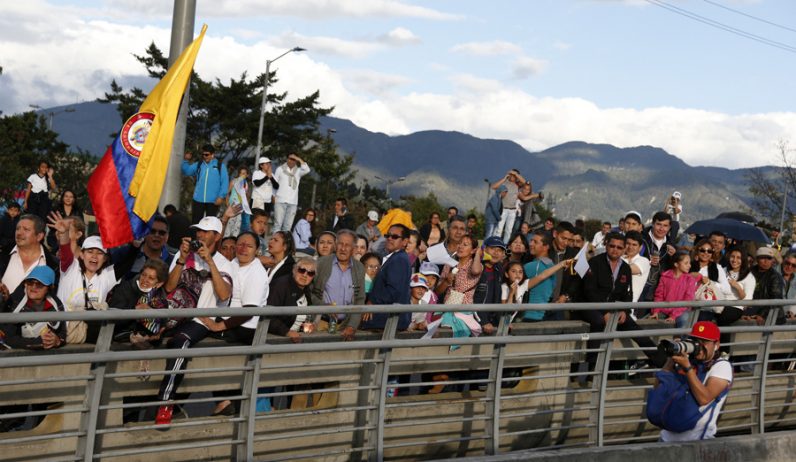