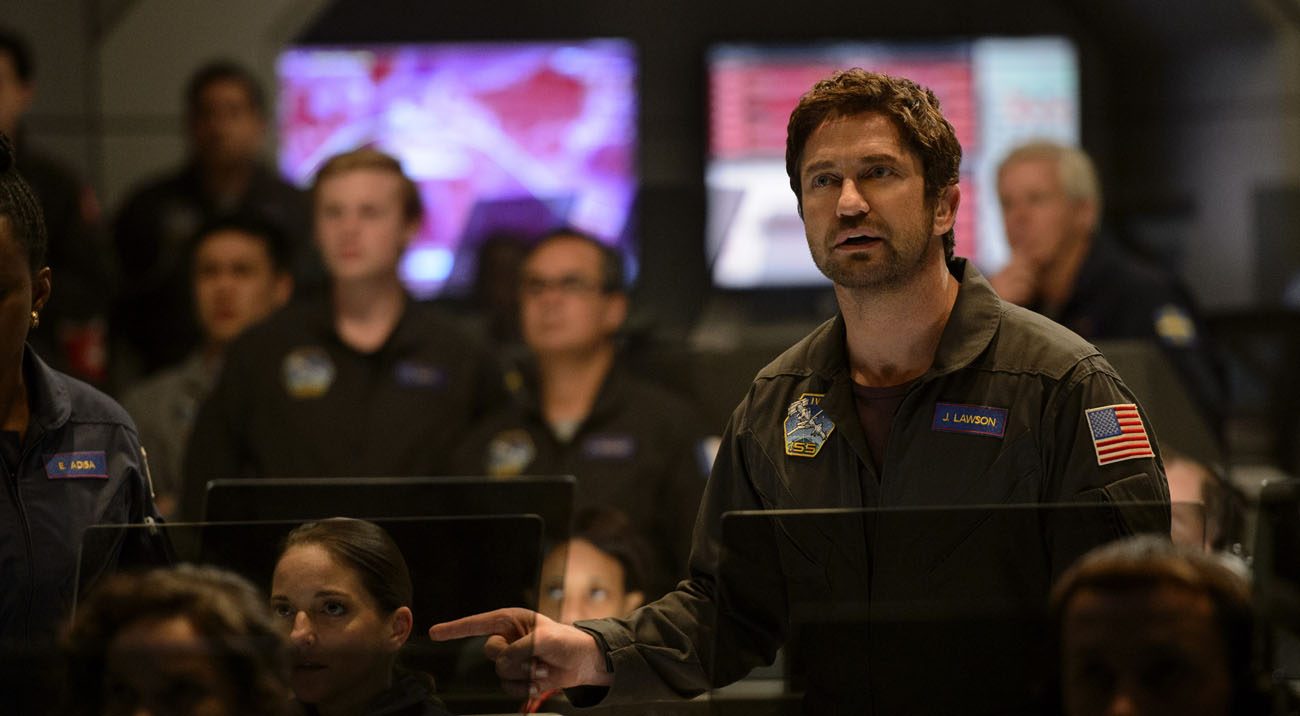 NEW YORK (CNS) — Mostly murky with a strong chance of boredom is the forecast for “Geostorm” (Warner Bros.). Never, perhaps, has the potential wiping out of life on Earth seemed so ho-hum.

In between the catastrophes that are the real business of the day here, director and co-writer (with Paul Guyot) Dean Devlin tries to engage the audience by having a little girl named Hannah (Talitha Bateman) narrate the backstory and by setting up a sibling rivalry between Hannah’s dad, Jake Lawson (Gerard Butler), and his younger brother, Max (Jim Sturgess).

Jake is the smart-alecky scientist who created the Dutch Boy network, a system of weather-controlling satellites that, as of the near-future, has successfully overcome the effects of global warming. (Won’t Al Gore be relieved!) And Max is a conformist State Dept. official who had the unenviable task of firing Jake after big bro mouthed off to a congressional committee once too often.

But fraternal estrangement will have to take a back seat to saving the world once it becomes apparent that someone has sabotaged Dutch Boy with the aim of causing a series of overwhelming natural disasters. Hail the size of volleyballs, anyone?

So Jake and Max reluctantly bury the hatchet and, with the help of Max’s live-in girlfriend, Sarah (Abbie Cornish), a Secret Service agent, set about uncovering and defeating the plot.

Armchair apocalypse fanciers may relish the ravaging of cities around the globe and the threat of the titular civilization-destroying phenomenon. But anyone looking for more than mere spectacle in this by-the-numbers action flick will come away disappointed.

Max and Sarah’s dodgy domestic arrangement eventually moves toward marriage and the numerous armed confrontations are mostly blood-free. Self-sacrificing heroism also puts in an appearance as the movie’s climax looms. Nonetheless, given the script’s lapses into divine name-taking and earthiness, this is still best suited to easily satisfied grown-ups.

The film contains much gunplay and other stylized violence with minimal gore, cohabitation, about a half-dozen uses of profanity, a couple of milder oaths and several crude and crass terms. The Catholic News Service classification is A-III — adults. The Motion Picture Association of America rating is PG-13 — parents strongly cautioned. Some material may be inappropriate for children under 13.