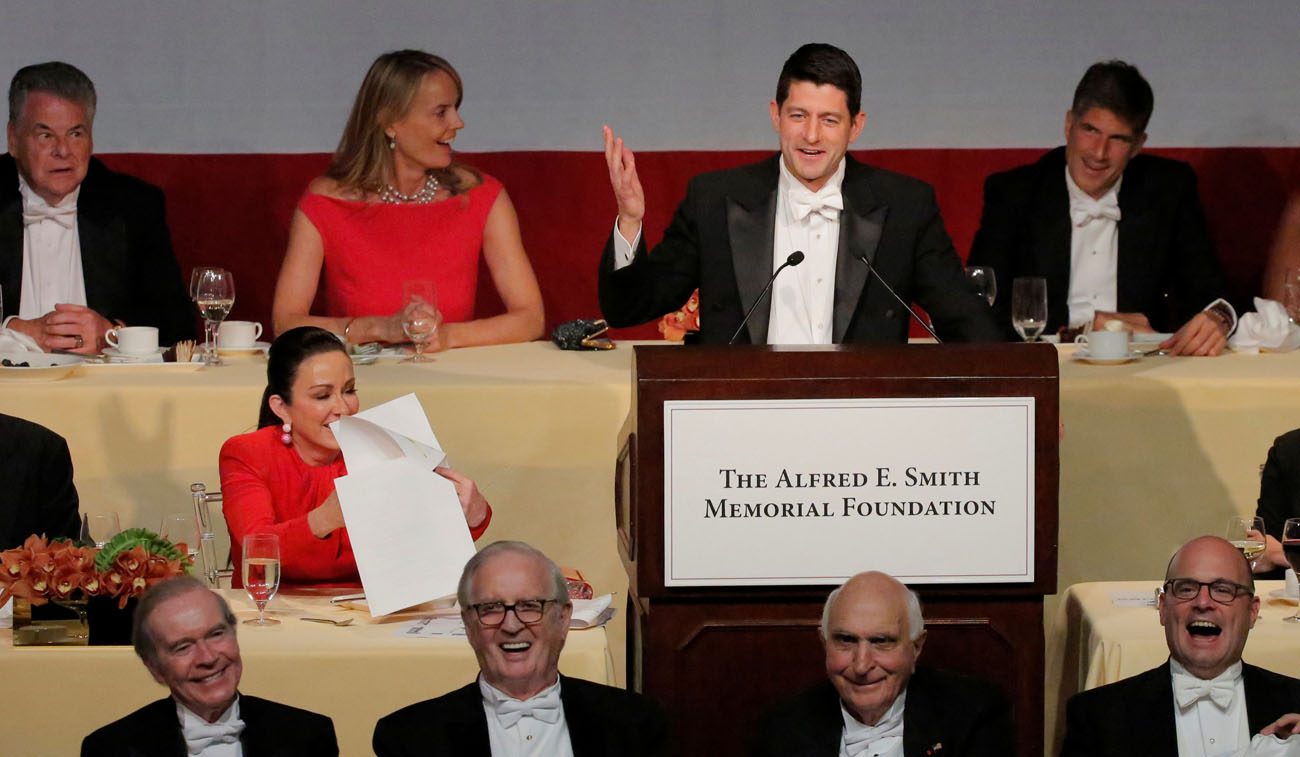 “We feel right at home. This looks just like our dinner parties in Janesville, Wisconsin,” the Republican said in his keynote speech.

“Amazing, I don’t think I’ve seen this many New York liberals and Wall Street CEOs in one room since my last visit to the White House,” the Catholic congressman quipped.

His speech followed the customary tone for the event, which has been a traditional opportunity for speakers to poke good-natured fun at themselves, one another and prominent guests from the worlds of politics, business and philanthropy without inflicting wounds.

Ryan was accompanied by his wife, Janna, at the dinner hosted by New York Cardinal Timothy M. Dolan.

Actress Patricia Heaton, a Catholic, was the emcee — the first woman to take that role at the august dinner. She currently stars in the ABC series “The Middle” and also played Raymond’s long-suffering wife in the popular comedy series “Everybody Loves Raymond.” Heaton is well known, too, for her support for pro-life causes.

Others on the 50-seat dais included Mayor Bill de Blasio, Gov. Andrew M. Cuomo, former Mayors Michael R. Bloomberg and David N. Dinkins, Catholic leaders and other dignitaries. U.S. Democratic Sens. Kirsten Gillibrand and Chuck Schumer of New York could not attend, as they had to be in Washington for votes.

The dinner is named for Alfred E. Smith, a former governor of New York who was raised in poverty. In 1928, he was the first Catholic nominated by a major political party to run for president of the United States.

During a presidential election year, the dinner planners invite the Republican and Democratic nominees for the nation’s highest office to roast one another usually good-naturedly. 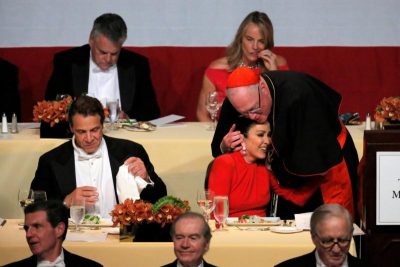 At last year’s event with then-Republican presidential nominee Donald Trump and his rival, Democratic nominee Hillary Clinton, the gloves came off and by all accounts was more contentious than in previous years.

The New York Times reported that outside this year’s dinner, about 100 protesters marched past the hotel decrying Trump’s plan for a border wall.

The paper said another 50 people demonstrated against the president’s decision to end the Deferred Action for Childhood Arrivals program, or DACA, and accused Ryan of not supporting continuing the program. A CNN story from September said that Ryan was for Congress trying to keep DACA.

In his dinner remarks, Ryan took some shots at Trump, but the House leader also aimed some jabs at much of Washington officialdom, including fellow members of Congress. He also made a few funny remarks about growing up Catholic and the Catholic Church in general.

“Now I promise you, you can all relax about my remarks,” Ryan said in his speech. “I know last year at this dinner Donald Trump offended some people with his comments which critics said went too far. Some said it was unbecoming of a public figure and that his comments were offensive. … Well, thank God he’s learned his lesson.”

“Everyone will report what happened here tonight differently,” Ryan continued. “Breitbart will lead with ‘Ryan slams the president amongst liberal elites.’ The New York Times will report, ‘Ryan defends the president in a state Hillary won.’ And the president will tweet, ‘300,000 at Al Smith dinner cheer mention of my name.'”

So Ryan said he wanted to give some background facts about himself for those who don’t know him very well. “And they all must be true — you can find them on the internet,” he said.

For starters, “I’m from Wisconsin. It’s a great state to visit in the fall. Looking back, someone should have told Hillary.” Clinton famously skipped the blue state, feeling it was so solidly Democratic, she didn’t need to campaign there. But she lost the state in last year’s election.

“Speaking of which, I got Hillary’s new book,” Ryan continued. “This sums up today’s politics perfectly. She took eight months, writing 10 hours a day, to explain what happened in 512 pages. The president explained it in a tweet, ‘Hashtag, I won.'”

Citing another fact, he said, “I once drove the Oscar Mayer Weinermobile, which meant people were constantly laughing at me. It was the perfect preparation for being in Congress.”

“I am proud member of the church,” Ryan remarked. “You know, the Catholic Church actually has a lot in common with Washington, D.C. Either place it takes about seven years for someone to get confirmed.”

He also said that the only difference “between a Catholic Mass and a filibuster is that one ends with a sip of wine and the other ends with an entire bottle.”

He noted that at Trump’s inauguration Jan. 20, Cardinal Dolan gave the benediction and recited a prayer from the Book of Wisdom, “a book no one in Washington is familiar with.”

“Actually, there was just this one awkward moment — when the cardinal talked about the infallible almighty Supreme Being, the president stood up and took a bow … both presidents actually,” Ryan laughed, referring to Trump and former President Barack Obama.

Ryan ended his speech on a serious note, calling the evening “a magnificent event, and a much needed one, one needed now more than ever.”

“It is an opportunity for all of us to come together in support of a truly righteous mission — to bring hope to the neediest children of the Archdiocese of New York,” Ryan said. Earlier that day, he said, Cardinal Dolan had taken him to the Foundling Hospital, “where they are just doing incredible work to help underserved families rebuild their lives, to reclaim a greater sense of dignity and purpose.”

“We can achieve so much when we tackle poverty eye to eye, and soul to soul. As Catholics, we call this solidarity and subsidiarity,” he said.

He urged the audience to think of “our fellow citizens beyond these (New York) boroughs who are hurting tonight,” referring to the victims of hurricanes in Texas and Puerto Rico and of wildfires in California.

“So much has been taken, but not our spirit. Not our resilience. Not our faith,” he said.

“In these moments when people are suddenly isolated and separated from everything they know, it is those unspoken bonds between us — that common humanity — which brings us together and lifts us up,” Ryan said. “A lot of people are hurting tonight. Please keep them in your prayers. May they, in the fullness of time, find comfort and renewal.”