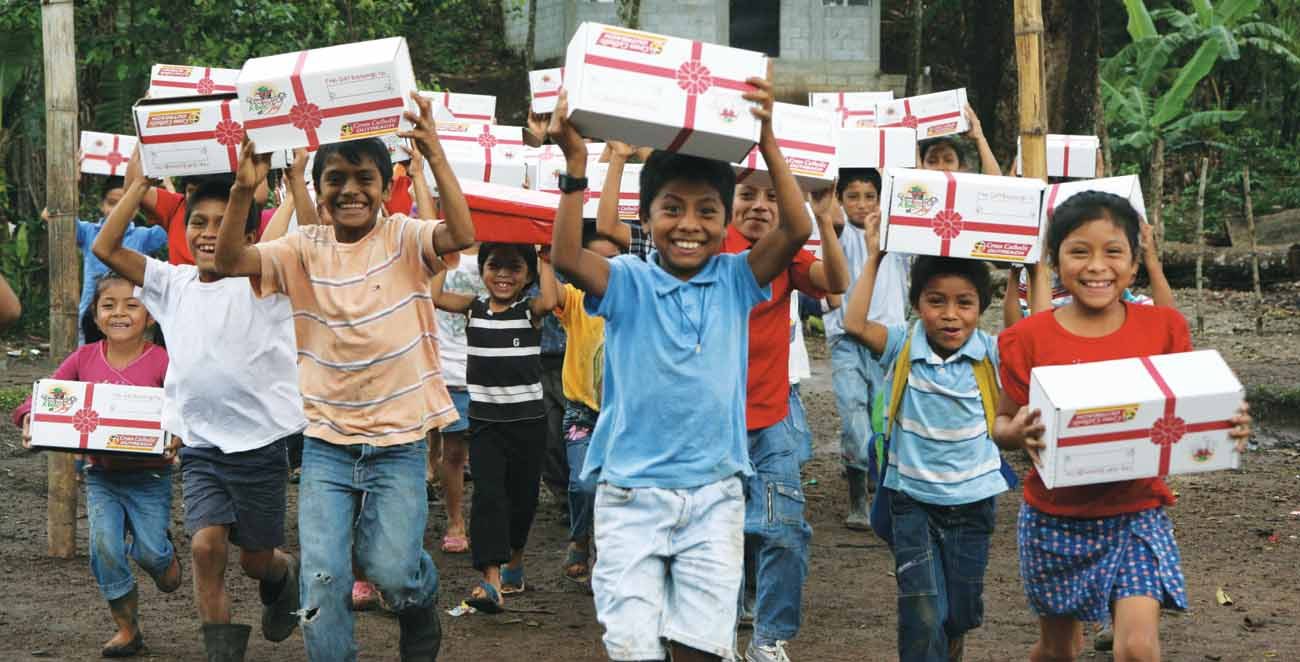 BOCA RATON, Fla. (CNS) — Cross Catholic Outreach’s “Box of Joy” program is now in its fourth year and has expanded to provide needy children in four countries with a Christmas gift box packed by volunteers in dioceses across the United States.

More than 300 Catholic groups, parishes and schools have signed up to participate in the 2017 Box of Joy program to date. The program aims to provide the boxes for 60,000 impoverished children in four poverty-stricken countries: Haiti, the Dominican Republic, Guatemala and Nicaragua.

Participants pack a shoe-size boxes with small gifts such toys, dolls and race cars, and adding essentials like soap, pencils, toothpaste and toothbrushes, as well as a few treats like hard candy and coloring books, based on suggestions found at http://www.crosscatholic.org/boxofjoy. The site also offers a Create-A-Box-Online option.

Those who get involved in the program can choose a child’s age and gender and then pack the box. They include $9 in each box to cover shipment from a local drop-off center to the child. Boxes are then dropped off during Box of Joy Week, which this year is Nov. 4-12.

“People jump at a chance to serve God by packing and sending help and hope. If you could see the faces of the kids on the receiving end — you’d see we’re hardly packing just toys and supplies: We’re boxing up and shipping happiness,” said Jim Cavnar, president of Cross Catholic Outreach, which is based in Boca Raton.

Cavnar said that out of the $9 included in each box, $2 supports outreach in the child’s community.

Asked if sending children in dire poverty a box of toys is really what they need, he responded: “Of course it is — when it is part of a broader response.”

Through a network of local partners, he said, Cross Catholic Outreach “responds to emergency needs and addresses root causes of extreme poverty.”

“But for a child who has never received a gift, what better way to combat hopelessness than with a message of hope and love?” he asked. A Box of Joy is a “tangible way to say what Christmas — and Jesus — are about,” he added. “Box of Joy doesn’t replace other aid, it enhances it.”

Founded in 2001, Cross Catholic Outreach is nonprofit relief and development agency that serves “the poorest of the poor” internationally by channeling aid through dioceses, parishes and Catholic missionaries. The organization says that is a cost-effective way to help the poor break the cycle of poverty “while advancing Catholic evangelization.”

Cavnar expressed amazement at just how quickly the Box of Joy program has grown in four years. In 2014, the pilot year for the program, he said, the agency had two dioceses and “a handful of parishes and schools” helping to brighten Christmas for children in Guatemala. The following year 12 dioceses sent gifts to over 11,500 children in Haiti and Guatemala.

Last year participation went nationwide and 32,000 children in Haiti, Guatemala and the Dominican Republic. This year children in Nicaragua also will receive the boxes.

He called the program a “two-way” street, because poor children receive some Christmas joy, and everyone who participates, from selecting and packing the gifts and hand-delivering them, “also share in the joy.”

The boxes are opened by children who “very likely will receive nothing else,” Cavnar said. “Seldom do any of us have a chance to cause such genuine happiness.”