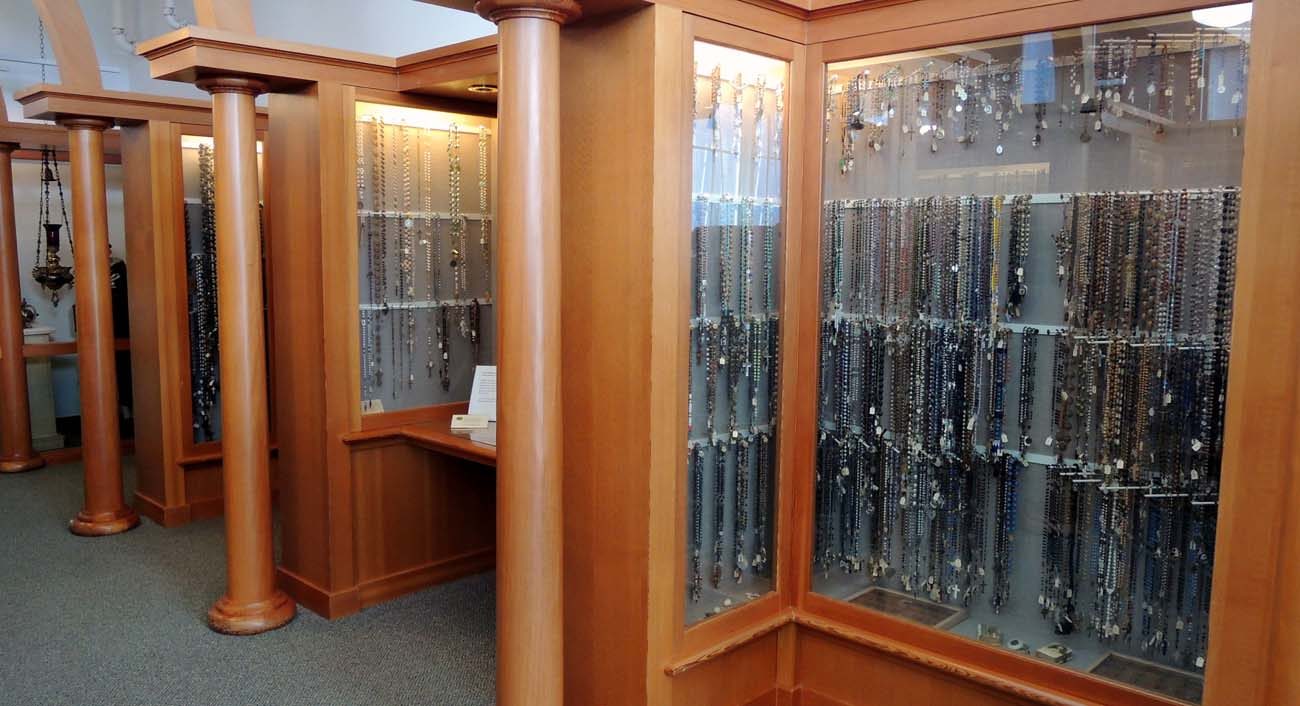 Rosaries are seen Sept. 20 at the Columbia Gorge Interpretive Center Museum near Stevenson, Wash., in Skamania County. The center's collection of rosaries has been verified as the largest in the world. (CNS photo/Mitch Finley)

STEVENSON, Wash. (CNS) — Travelers who happen upon a regional museum in Washington state are frequently surprised to find there the largest collection of rosaries in the world — according to no less an authority than “Ripley’s Believe It or Not.”

Located in southeastern Washington, on the north side of the Columbia River Gorge, near the picturesque town of Stevenson, the Columbia Gorge Interpretive Center houses a collection of some 4,000 rosaries that can easily take hours to examine closely.

The display of rosaries was the life’s work of the late Donald A. Brown of North Bonneville, who was a founder of the Skamania County Historical Society. Born April 27, 1895, in Tualatin, Oregon, he died in a traffic accident Dec. 14, 1975, at age 80.

In an article he wrote for a regional newspaper, Brown remarked: “Perhaps the most common question asked by visitors to my rosary chapel in North Bonneville (the site of the rosary collection during Brown’s lifetime) is how did I ever happen to originate such an unusual collection?”

Brown explained that his collection began in 1917 when he was living in The Dalles, Oregon, but his interest in the rosary as a devotional prayer began years earlier, before he became a Catholic, while he was confined to the Mercy Hospital in North Bend, Oregon, recovering from pneumonia.

He observed the rosary being worn on the habits of the Sisters of Mercy who staffed the hospital. Later, Brown embraced the Catholic faith.

The rosaries in the Columbia Gorge Interpretive Center are organized according to size. The smallest ones are made from beads the size of a pin head, while the largest rosary on display is over 16 feet long. This rosary’s “beads” were made from Styrofoam balls by children in Malden, Massachusetts, for a school play. 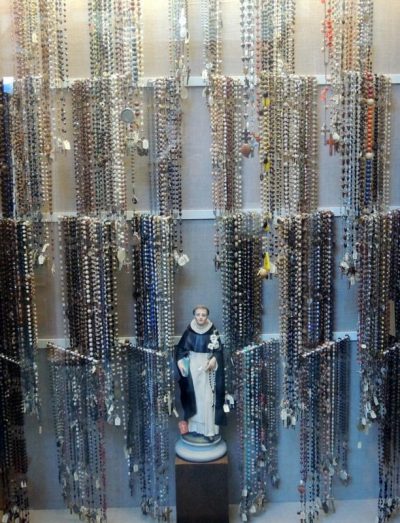 Rosaries are seen Sept. 20 at the Columbia Gorge Interpretive Center Museum near Stevenson, Wash., in Skamania County. The center’s collection of rosaries has been verified as the largest in the world. (CNS photo/Mitch Finley)

For example, Brown received rosaries from Father Edward J. Flanagan, of Boys’ Town fame; musician and television celebrity Lawrence Welk; and from Al Smith, the first Catholic to run for the office of president, in 1928.

One rosary was donated by a small church community in Bavaria. It had been left there by Robert Kennedy. The parish sent the rosary in Kennedy’s memory, when they heard of his assassination, which took place June 5, 1968. Yet another rosary arrived soon after the interpretive center opened in 1995, from Lou Holtz, head football coach at the University of Notre Dame 1986-1996.

The most historically significant rosary in Brown’s collection, however, is the one donated by President John F. Kennedy. This is the only rosary in the collection requested by Brown himself.

He wrote to Kennedy’s campaign headquarters when he heard that the Massachusetts senator was running for president. In 1960, Brown received a small wooden bead rosary that, apparently, was used by the future president during World War II.

Undoubtedly, the rosary that causes a stir most frequently is one that, instead of having a crucifix attached, has a large metal swastika. A handout given to visitors by the center explains in detail that, centuries before it was adopted as the symbol for Adolf Hitler’s Nazis, the swastika was used by various religions including Hinduism, Buddhism and various Native American traditions. Indeed, the word “swastika” is from ancient Sanskrit, although its meaning is forgotten.

Each rosary in the collection has an assigned number, and here are a few other noteworthy rosaries:

— Rosary 98: Made by Brown himself, using seeds from the catalpa tree. In place of the Our Father beads, there are small staurolites, or “Fairy Crosses.” According to the U.S. Geographical Society Survey, staurolite is “the most curious material found in the United States, otherwise known as Fairy Stone. An iron aluminum silicate found only in Virginia, the reddish-brown and brownish-black crystals occur in well-defined crosses.”

— Rosary 516: A rosary from Palestine made with small olive wood beads. This is the rosary donated by Father Flanagan. On the back of the crucifix is the priest’s autograph.

— Rosary 1324: A 25-decade rosary made of rather crude handmade beads carved from white bone. It was made by St. Lucia dos Santos, one of the Fatima visionaries.

NEXT: ‘Box’ program aims to give poor children in four countries Christmas joy