For seminarian, God wrote straight with crooked lines — or headlines 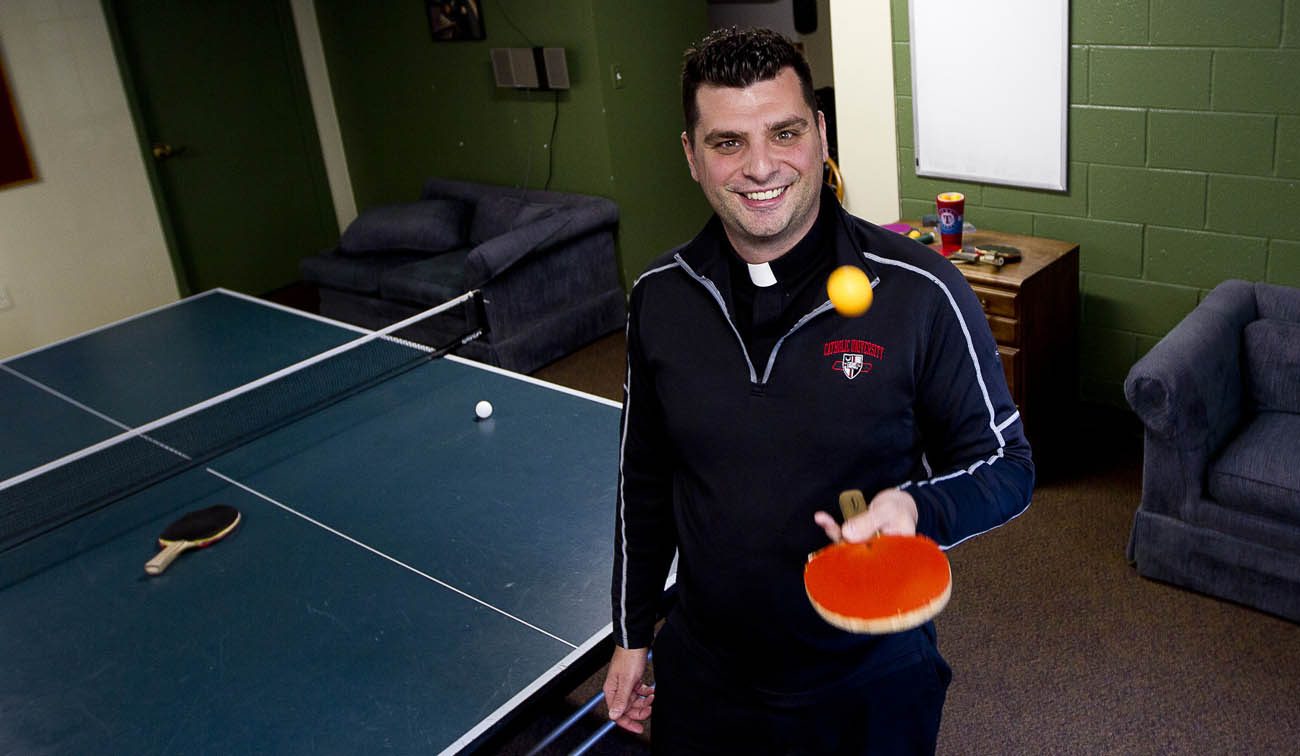 Anthony Federico, a seminarian from the Archdiocese of Hartford, Conn., poses for a photo inside the recreation room at Theological College in Washington Oct. 25. In 2015, the former sports journalist was the college's darts, pool and ping-pong champion. (CNS photo/Tyler Orsburn)

WASHINGTON (CNS) — Anthony Federico is one of three seminarians from the Archdiocese of Hartford, Connecticut, studying at Theological College in Washington. But he’s the only one of them to inadvertently create an internet outcry.

Federico, who is 33 and in the third year of his theologate at Theological College, grew up in Connecticut, a big fan of the National Hockey League’s Hartford Whalers, who have since decamped to Charlotte, North Carolina. He was possibly an even bigger fan of baseball’s New York Yankees — so much so that he couldn’t watch the opening game of the World Series as he was still mourning the Bronx Bombers’ playoff exit the week before.

Not only was Federico a fan, he was a participant: hockey, baseball, soccer, swimming and tennis, from youth leagues to high school at Notre Dame in West Haven, Connecticut. At Providence College, Federico majored in theology — not the keenest choice for finding a job in the big, wide world.

However, his passion for sports landed him a job at ESPN back in his home state. In an interview with Catholic News Service, Federico said he saw it as “vindication” that he could get gainful employment despite his theology major. He worked there seven years, first in the tape warehouse finding and shuttling vintage footage where it needed to go.

Then Federico got an assignment in ESPN’s “mobile group” in digital media work — a job he considered a plum. “It was the right place at the right time,” he said, as cellphone usage was exploding.

Then came the incident that changed Federico’s career path.

In 2012, a little-heralded guard named Jeremy Lin, a Taiwanese-American, started playing terrific basketball for the New York Knicks, gaining international fame. Those in the know started gushing about Lin’s emergence.

Eventually, Lin’s star dimmed. ESPN had a story ready to go about it. It was Federico’s task to write the headline. He wrote “Chink in the Armor” never intending it, he said, to be an ethnic slur against Lin.

But the damage was done, the blowback immediate and intense, and the fallout inevitable. Federico got fired within days from the only job he’d had his adult life.

Federico, the eldest of five siblings, moved back in with his parents, who did their best to shield him from “the daily hate mail and death threats,” he said.

Over time, Federico picked himself up dusted himself off. In a meeting he attended with representatives of a start-up in Stamford, Connecticut, just to give advice, he walked away with a job offer to be a consultant.

As opposed to working at ESPN, which nearly always entailed the late shift, Federico worked days for the startup. He told CNS he’d walk around Hartford on his lunch hour, taking in the sights.

He came upon a church that had a weekday Mass at 12:10 p.m. After dismissing the thought at first with “I’m not a daily Massgoer,” Federico went inside one day and got hooked. Soon, colleagues asked him what he was doing with himself during his lunch hours. “Come and see” was his reply.

So they went. And saw. And discussed. Few of them were Catholic, and they posed serious questions about Catholic belief and practice. “These are brilliant people,” he said. “I had to go home and look at the Catechism (of the Catholic Church)” to frame suitable answers for the next day.

On another visit, he noticed the “struggle” of the parish priest, who was in the confessional before the noonday Mass, but did not have enough time to hear everyone’s confession before he had to prepare to celebrate Mass. “I thought, ‘If we just had more priests … ohhhh, I get it, Lord,'” Federico recalled.

That was the moment he knew his vocation.

“I had a good deal. I was making money, traveling a lot. I thought I had the life I was supposed to have,” Federico said. “I was content with my life, but not happy.” He added family and friends were “surprised, but not shocked” with his decision.

Federico said he had considered priesthood as early as age 15, but always distanced himself from the idea. When he went to the Hartford archdiocesan vocation office, the personnel knew him already — not from his ESPN notoriety, but because he had applied a couple of years before only to be “nervous, scared, afraid” of following through. “I was looking at it through the no’s, not the yes,” he added. This time “I am doing this in freedom,” he said.

This marks Federico’s fifth year at Theological College, which is the national diocesan seminary of The Catholic University of America and directed by the priests of the Society of St. Sulpice. His first two years were for an undergraduate grounding in philosophy, as well as to acclimate to seminary life.

And while he’s getting his classwork in, and living in rectories and learning from pastors during the summers, Federico hasn’t renounced his love of sports.

He said he and his fellow seminarians have won four intramural championships at Catholic University, which is across the street from the seminary. Theological College also won the Vianney Cup, a soccer tournament for four East Coast seminaries.

And while some laypeople participate in “iron man” triathlons — swimming, bicycling and running — Federico was the 2015 winner of the “iron seminarian” competition that takes in the decidedly different pursuits of darts, pool and ping-pong.

“People think seminarians live in some dark building and walk like this,” he said, imitating a slow, straight walk with palms pressed together at chest level. “We have a great culture here.”

And, if all goes according to plan — provided it’s God’s plan — Federico will be ordained to the priesthood in spring 2019.