Panel: Efforts to protect life at all stages has never been more important 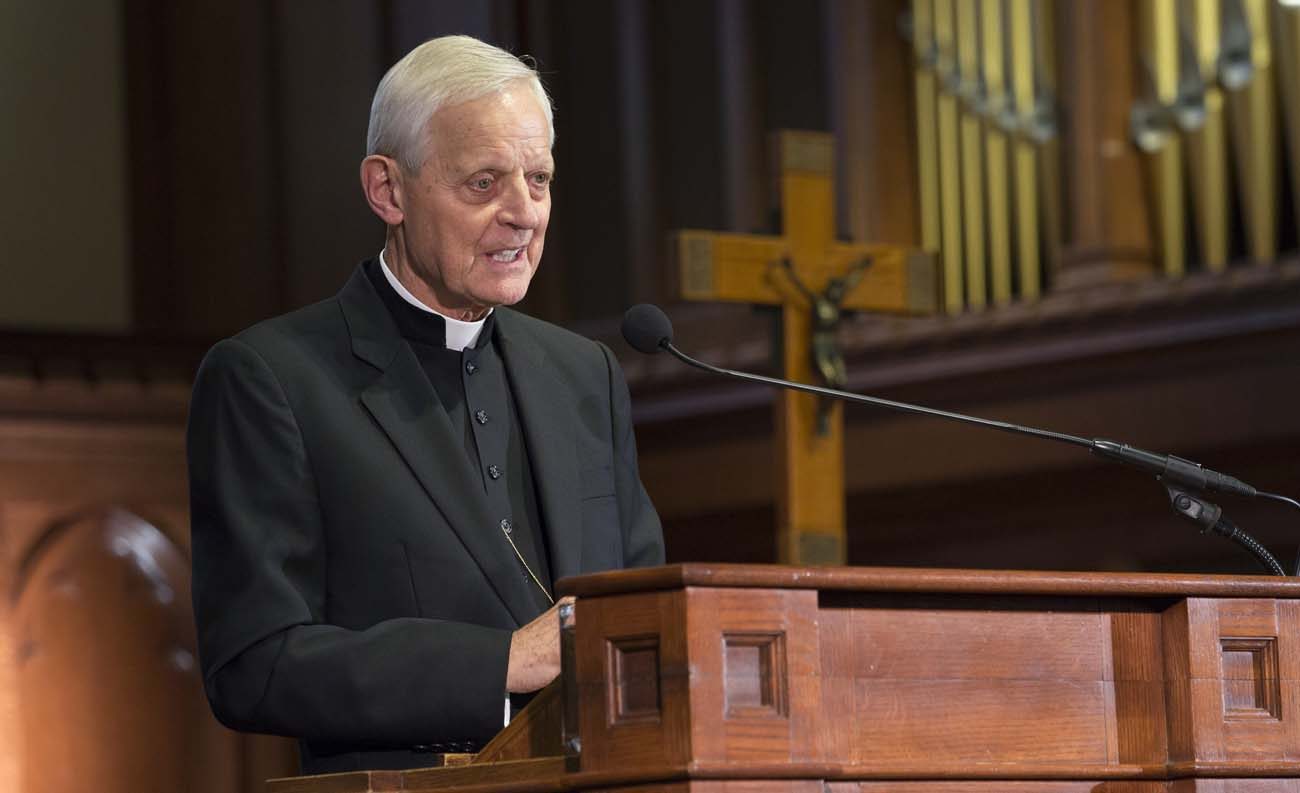 Cardinal Donald W. Wuerl of Washington delivers a keynote address prior to a panel discussion on "Lives Worthy of Respect" at Georgetown University in Washington Oct. 2. The event was held to kick off the month of October as Respect Life Month. (CNS/Jaclyn Lippelmann, Catholic Standard)

WASHINGTON (CNS) — Stories from the lived experience of the speakers took the place of policy discussions during Georgetown University’s first “Lives Worthy of Respect” conference Oct. 2.

The mass killings in Las Vegas the evening before cast a pall over the event, which took place in the Dahlgren Chapel on campus and was sponsored by the university’s Pellegrino Center for Clinical Bioethics. It was held to coincide with the opening of the fall Supreme Court session.

Washington Cardinal Donald W. Wuerl, the keynote speaker, observed of the shooting spree, “Such senseless acts of deadly violence boggle the mind.” He led the crowd in a silent prayer to remember the 59 lives lost and the more than 500 injured.

“Today, many accept the premise — advanced in the media, public schools and even civil law — that the value of human life is relative, and that people have the power to choose which lives are worth living and which are not,” Cardinal Wuerl said in his address.

“What is the fruit of this culture’s ‘choice’ mentality? Human life is increasingly held cheap as violence stalks our communities, suicide is on the increase nationwide, and in some states, instead of saving lives, there are physicians who help to end lives,” he said. “The elderly and disabled, in addition to the unborn, are especially vulnerable in this climate.

“Once you accept the thesis that it is all right to kill human life before it is born, or as it nears its end, or for some other reason, at almost any time you accept two premises: that we, human beings, have the ultimate say over all life and who gets to live, and that such a decision is ultimately arbitrary.”

Cardinal Wuerl described “the choice offered by assisted suicide as “a false compassion, lacking true care and concern for the dying, as Pope Francis has noted. Instead of regarding suffering people as disposable and eliminating them, as one view asserts, we should accompany them with love and support them with access to better palliative care.”

The cardinal shared several experiences that he said taught him about the dignity of life, such as visiting a mother who had just given birth to sextuplets. As he blessed the six newly born children, he said, the mother told him “with pride in her voice and joy in her eyes” about each infant’s personality and characteristics.

The cardinal told another story about visiting a hospital in Peru, where he had the opportunity to hold a day-old infant. He said this experience taught him how strong the grasp of an infant can be.

This child grasping onto his finger became a parable to him representing the “countless unborn children reaching out to hold onto you and me, reaching out with all their strength.”

In talking about pro-life activism, Cardinal Wuerl said that “we cannot be silent. … We dare not turn our attention away. We pray and march so that these innocents will have someone who will speak for them. We labor in order that unborn children will not be ignored, forgotten, invisible to people’s consciences, to remind the nation that behind the word ‘abortion’ and euphemisms like ‘choice’ and ‘reproductive health’ are real human beings.”

Panelists included U.S. Rep. Brad Wenstrup, R-Ohio, who a Cincinnati Republican, who has introduced bipartisan legislation opposing physician-assisted suicide. He is working to strike down the Death With Dignity law enacted by the District of Columbia in December.

He told a story about his 12-year-old nephew and a school religion test. Asked to describe God’s presence in his life, he wrote about his closeness to his sister Katie, who suffers from CDKL5, a rare neurological disorder that leaves her unable to walk or talk.

“God’s largest presence in my life comes as most would call sad or discouraging,” the boy wrote. “But it is the greatest blessing I will receive in this life.”

Wenstrup, also a doctor of podiatric medicine, described treating his first AIDS patient in 1985. The patient died within hours, but he said he learned from that experience that “their life had meaning. And that no one is better than anyone else. It told me it matters to the very last moment.”

The congressman is best-known for his quick action in June after Rep. Steve Scalise, R-Louisiana, was shot by a gunman at an Alexandria, Virginia, baseball field. He applied a tourniquet credited with keeping Scalise alive before surgery, and he, along with Scalise, received a standing ovation in the House of Representatives when Scalise returned to work Sept. 28.

Panelist Helen Alvare, a law professor at George Mason University who describes herself as “a pro-life feminist,” said her activism is more for her “than just being anti-abortion.”

“Freedom is not, obviously, choosing anything you want,” she said. “Freedom is acting in accordance with what you are built to be.”

“Abortion is the antithesis of a virtuous act,” said panelist Tony Lauinger, vice president of National Right to Life. “It is not a matter of private morality. It is a public morality. Preventing abortions, he added, is “protecting the most vulnerable in our human family.”

He said the 1973 Roe v. Wade decision, legalizing abortion on demand, made him feel like he “had been hit in the face by a two by four,” because it came just months after his first child had been born, and he remembered his wife telling him how their baby would move or kick during her pregnancy.

Sister Mary Louise Wessell, a Sister of St. Joseph, said she sees the dignity of life in the “resilience, the strength, the courage and the hard work of homeless families” with whom she works. She the founder and program manager for the Tenants Empowerment Network of Catholic Charities in the Archdiocese of Washington.

“You would have no doubt that each homeless child and parent in this city has a God-given life worthy of respect if you could spend a day with them, witness their dignity in the face of adversity and their determination to make lives better for their families,” said Sister Wessell.

Contributing to this story was Kelly Sankowski, a reporter at the Catholic Standard, newspaper of the Archdiocese of Washington.