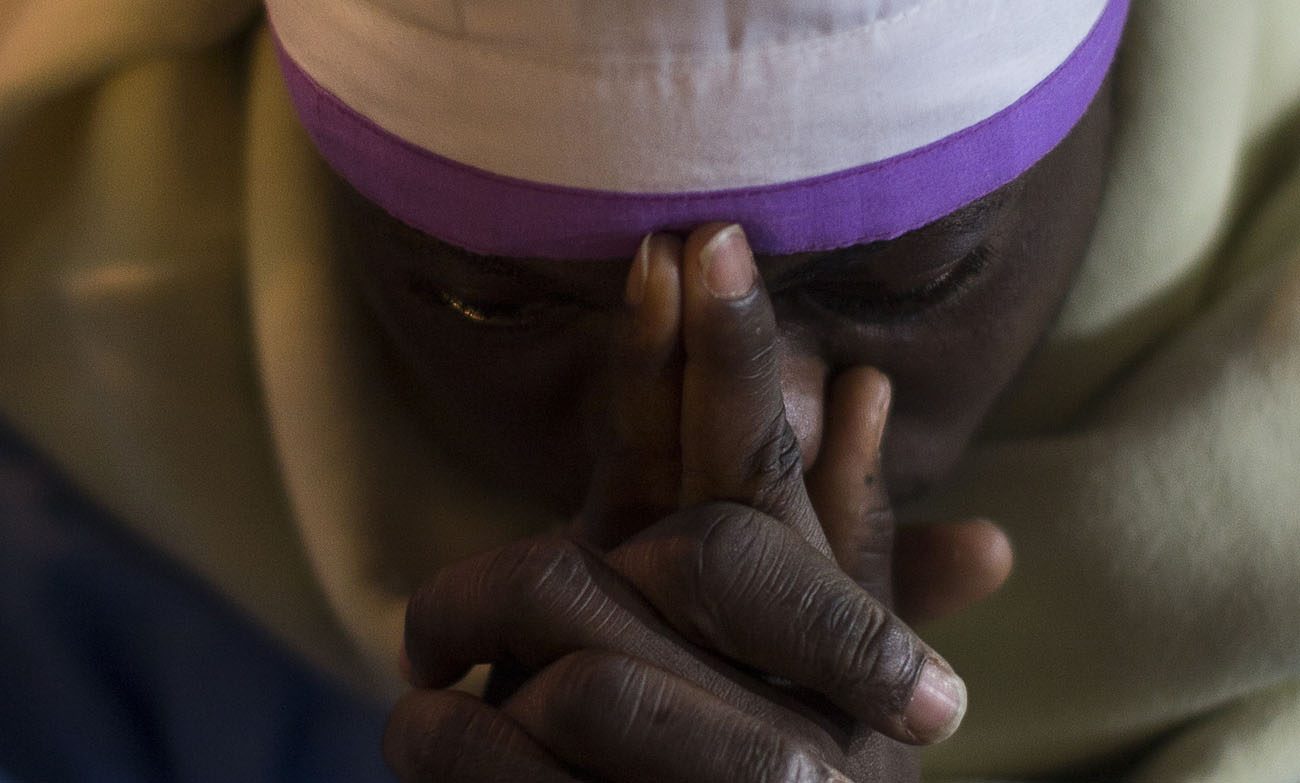 A Nigerian pilgrim prays in the Church of Nativity in Bethlehem in this 2015 file photo. The decline of the Catholic Church in Nigeria can be attributed to the West, Bishop Matthew Kukah of Sokoto, Nigeria, said during a visit to Liverpool, England, Oct. 10. (CNS photo/Atef Safadi, EPA)

LIVERPOOL, England (CNS) — A Nigerian bishop said the Catholic Church in his country is beginning to lose its public influence partly because of the decline of religious faith in the West.

Bishop Matthew Kukah of Sokoto accused European and American politicians and diplomats of publicly “pandering” to Islam at the expense of Christianity.

The result, he said, was the ascendancy of Islam and evangelical Christianity in Nigeria and the decline of Catholicism.

He told Catholic News Service in an Oct. 10 interview in Liverpool that the widespread loss of Christian faith in the West was “absolutely” among the causes of the diminishing influence of the Catholic Church in his own country.

“From my own experience, I find that the British high commissioner, the ambassadors from European countries, the American ambassador — they are pandering more to Islam than to Christianity, because most of them have turned their backs on Christianity,” Bishop Kukah said.

“The Arab world is pouring money into Nigeria and the Pentecostal pastors in America are doing the same, and the Catholic Church is now becoming the weakest in terms of access to resources,” he said.

“For me, as a bishop of the Catholic Church, I can see very clearly that our influence in the public space is gradually reducing, and that is largely because of our capacity to mobilize resources,” he said.

It had become no longer possible, he said, for the bishops to appeal to historically Catholic nations for financial help with church projects.

“We can’t go to the Irish ambassador or the Spanish ambassador and say, ‘This is (needed) for the Catholic Church,'” Bishop Kukah said. “People are not interested.”

“In Ramadan, the ambassadors of Islamic countries are very keen to come to the Muslim celebrations in a way and manner that the Irish or any of these ambassadors are not likely to do for (Christmas) midnight Mass or the Easter celebrations.”

He said that, in his experience, most Catholic ambassadors would prefer to be seen publicly at a Muslim celebration than attending a Christian ceremony.

“Before our election, John Kerry came to Nigeria,” he said. “John Kerry, when he was secretary of state, left the U.S. and came straight to see the sultan of Sokoto. It was a visit that nobody could explain.

“John Kerry claims to be a Catholic. This is the perfect example. He landed in Abuja. The American Embassy is in Abuja. There is a cardinal in Abuja, and a very visible cardinal for that matter, but it doesn’t cross the mind of John Kerry to even see out of courtesy the cardinal. He takes another plane to Sokoto and goes to the palace of the sultan, the head of the Muslims,” he said.

“The reaction of the Nigerian Christian community was very interesting. They thought Kerry was pushing the Islamic agenda,” Bishop Kukah said. “This was ahead of the elections, and they thought he was giving the Muslim candidate a leg up.”

“In a country like Nigeria, influence is peddled, and we are not there at the table,” the bishop continued, adding: “We have not trained our people for roles in public life … we are still very shy of the public space, and we are not aware of how much things have moved on.”

Bishop Kukah, chairman of the interfaith dialogue committees of both the Nigerian bishops’ conference and the regional conference of West African bishops, was in England on a speaking tour.

On the same day, two bishops in Nigeria encouraged the Association of Diocesan/Religious Directors of Social Communication to strive to better publicize the good works of the church in the public domain.

Bishop Albert Ayinde Fasina of Ijebu Ode said enhanced training of Catholics for work in the media would help to maintain a presence for the church in the public square.

“In the spirit of the new evangelization, you are required to put your creativity to work … by engaging the media tools for catechesis,” he said in a speech on the first day of a three-day meeting. “The church needs to be concerned for, and be present in the world of communications, in order to dialogue with people today and help them encounter Christ.”

Bishop Godfrey Igwebuike Onah of Nsukka said that Catholic professionals must also be ready to correct inaccurate reports about the church.

“‘If we do not blow our trumpet, no one will blow it for us,” he said. “‘We need a kind of media that can serve as a watchdog of the society as well as be the gadfly that can bring us to our toes when we go wrong.”

Contributing to this story was Peter Ajayi Dada in Lagos, Nigeria.

NEXT: Silver anniversary: Making the catechism shine in the 21st century