Silver anniversary: Making the catechism shine in the 21st century 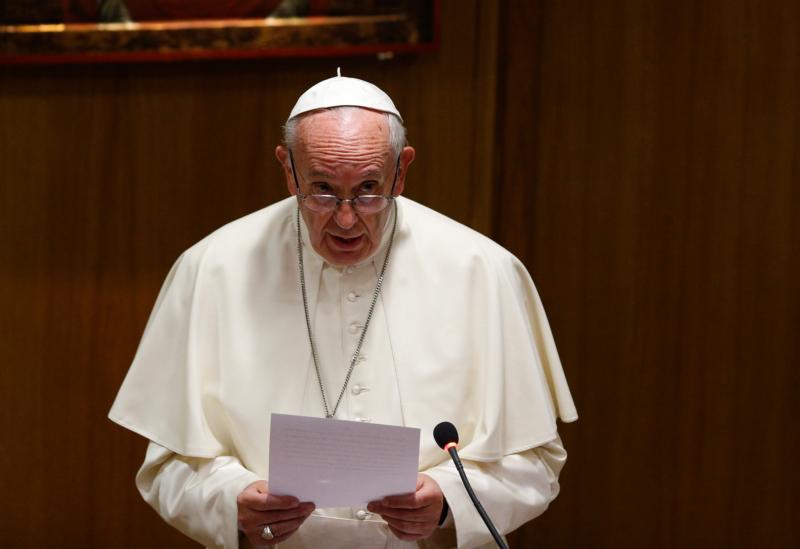 Pope Francis addresses participants at an encounter marking the 25th anniversary of the Catechism of the Catholic Church at the Vatican Oct. 11. The death penalty is “contrary to the Gospel,” the pope said in his speech. (CNS photo/Paul Haring)

VATICAN CITY (CNS) — As the church marks the 25th anniversary of the publication of the Catechism of the Catholic Church, promoting it as a means of teaching the truth about faith remains a challenge and a priority.

Since its publication in 1992, the catechism has been translated into 50 languages, including Swahili, Japanese and Gaelic, and it is also available in Braille, video and digital editions.

Nevertheless, in today’s digital age, when people have limitless access to information with the click of a mouse or the swipe of an app, opinions and even “fake news” can either inform or misinform Catholics on the principles of the Catholic faith.

“Society is changing in a very massive way, and it’s much more difficult to reach people,” especially in the digital age, Katharina Karl, professor of pastoral theology and religious education at the Philosophical-Theological University in Muenster, Germany, told Catholic News Service Oct. 11.

This ongoing challenge was what prompted the Catholic Church a quarter of a century ago to create a go-to reference that synthesized church teaching and serve as a guide for the faithful.

The idea of a compendium of Catholic doctrine was one of the fruits of the 1985 Synod of Bishops marking the 20th anniversary of the conclusion of the Second Vatican Council.

After requests from participants for a point of reference “for the catechisms or compendiums that are prepared in various regions,” St. John Paul II accepted their proposal, “considering it as fully responding to a real need, both of the universal church and of the particular churches.”

“The presentation of doctrine must be biblical and liturgical. It must be sound doctrine suited to the present life of Christians,” St. John Paul wrote in his Apostolic Constitution “Fidei Depositum” (“The Deposit of Faith”) Oct. 11, 1992.

Entrusting this task to 12 cardinals and bishops, St. John Paul chose Cardinal Joseph Ratzinger, the future Pope Benedict XVI, to lead the commission responsible for the drafting of the catechism.

While the need for a text that clearly explained the church’s teachings was welcomed, some criticized it for being too static or dogmatic and not in line with the spirit of the Second Vatican Council.

“It was said that the catechism failed to take into account the theological developments of the last century, particularly exegetical developments; it was not ecumenical; it was not dialogical” as it made affirmations as established beyond dispute, Cardinal Ratzinger said Oct. 9, 2002, during an address commemorating the catechism’s 10th anniversary.

The future Pope Benedict responded to those opinions by seeking to explain “what a catechism is and what is its specific literary genre,” as well as its proper purpose and doctrinal relevance.

The catechism is “a proclamation of faith,” of witness, for the teaching of the faith, he said. It presents a “given that precedes us,” but whose doctrinal formulation develops in the church, he said.

After his papal election, Pope Benedict continued to urge Catholics to use the Catechism of the Catholic Church as a handbook to rediscover the truths of faith and a deeper knowledge of church teaching.

“Read the Catechism of the Catholic Church and rediscover the beauty of being Christian, of being church, of living as part of the great ‘we’ that Jesus formed around him to evangelize the world,” Pope Benedict said in 2012.

In his speech marking the 25th anniversary of the Catechism of the Catholic Church Oct. 11, Pope Francis said the catechism is not only an important tool for believers to understand the faith, but also provides concrete answers to new challenges.

Just as the challenges people face evolve, so does the Christian response since “the word of God cannot be preserved in mothballs as if it were an old blanket to protect against insects,” he said.

In fact, “the word of God is a dynamic reality that is always living, that progresses and grows, because it is stretched toward a fulfillment that men and women cannot stop,” Pope Francis said.

Austrian Cardinal Christoph Schonborn of Vienna, who served with then-Cardinal Ratzinger as co-editor of the catechism, told Vatican Radio Oct. 12 that while the development of church teaching evolves over time, the church and the Gospel don’t change.

“We must change. This catechism is only 25 years old. The previous one — the Council of Trent — lasted 400 years. Therefore, I hope this catechism is at the beginning of its work for the church,” Cardinal Schonborn said.

Despite the catechism’s accessibility and continuing development, “there is still a lot to do,” Karl told Catholic News Service.

In her Oct. 11 talk, Karl emphasized the need for Catholics to have a formed conscience — rooted in the teachings of the catechism — that will allow for a “dialogue with God.”

“The catechesis today needs to create a space for people to enter into dialogue with themselves in the first place. It’s something they need to be taught in such a way that in the end it may become a dialogue with God,” she said.

Expanding on her speech, Karl told CNS that before catechizing, the church should embark on a “pre-journey with people” and reach out to them, given that, in today’s digital world, many people no longer socialize face-to-face or “go to catechism classes automatically.”

The use of Twitter by one group of Catholics from around the world who use the social network to pray together is one of many examples of how the church can use social media to engage people and “bring the catechism to them,” she noted.

“I think the sign of the times is to be creative,” Karl told CNS.

“The church is already going toward that path, but I think it’s a chance to enter the digital world not as something foreign to us but as something native to our times,” she said.

NEXT: Mexican state plans 147-foot Our Lady of Guadalupe statue