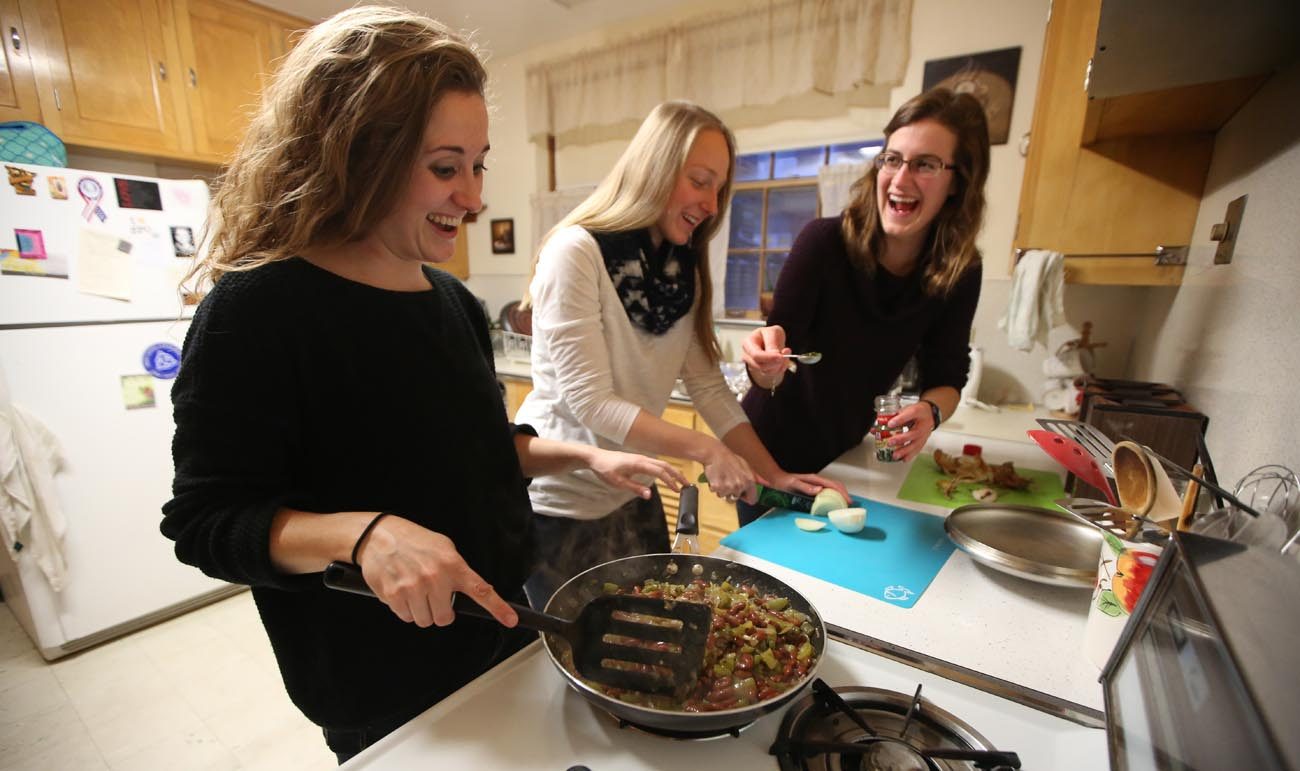 Lauren DeZelar, Catherine Bittner and Alex Bosch work in the kitchen to prepare dinner at Bethany House in northeast Minneapolis. The house of discernment is a new initiative of the Office of Vocations of the Archdiocese of St. Paul and Minneapolis in partnership with the Handmaids of the Heart of Jesus. (CNS photo/Dave Hrbacek, The Catholic Spirit)

MINNEAPOLIS (CNS) — A painting of Jesus with Martha, Mary and Lazarus in Bethany hangs in the living room of a former convent that is now a women’s discernment house in northeast Minneapolis.

It’s an image of how the residents see themselves: like Mary of Bethany, sitting at the feet of Jesus, listening.

The house is named Bethany House for this very reason.

“This is about discerning God’s will, and that’s the goal … wherever God may lead them,” said Father David Blume, vocations director for the Archdiocese of St. Paul and Minneapolis.

On Labor Day weekend, five women discerning consecrated religious life moved into Bethany House, a new initiative of the Office of Vocations in partnership with the Handmaids of the Heart of Jesus, a religious community based in New Ulm that recently established another convent in St. Paul.

Three of Bethany House’s residents have jobs, one is in graduate school, and one is in her senior year at the University of St. Thomas in St. Paul.

All are in different places in their discernment process, but they are dedicating the academic year to prayer, quiet and spiritual direction while living in community with like-minded women.

Some of the inspiration to establish the house came to Father Blume after one of his office’s regular Miriam Dinners for women discerning religious life.

A woman attending the event said she thought that men had an easier time discerning because they have minor and major seminary available to them, along with formation and spiritual directors.

Father Blume recalls her saying, “Our men have a path, but for us women, we don’t have a path — we have 500 paths, and it’s kind of confusing.”

“To me, that was very, very insightful, and it helped me understand what it is like to be a woman who thinks God might be calling her, but then not to have specific resources, (and) to have 500 paths,” Father Blume told The Catholic Spirit, the archdiocesan newspaper. “I thought, in the archdiocese, we’re going to create a path that can take some sort of confusion out of it.”

Father Blume knew of the Mater Redemptoris House of Formation, a discernment house in LaCrosse, Wisconsin, run by the Sisters of St. Francis of the Martyr St. George.

He thought he could launch something similar in the Twin Cities, and he turned to the Handmaids for help in developing it. The Vocations Office takes care of the house’s administrative aspects, and the Handmaids oversee the formation and pastoral aspects.

“We make it very clear that this is in no way a Handmaid discernment house,” Sister Mary Joseph said. “They have total freedom to discern any community. … Because we’re diocesan sisters, part of our role in our service of the diocese is to walk with young women in general, in helping them know and discern and embrace the Lord’s will, just like a diocesan priest would for the men.”

Located next to Holy Cross Church in Minneapolis, the building was constructed as a Franciscan convent and could hold as many as eight women, said Father Blume, who has been vocations director since 2015. He sees Bethany House as complementing the Miriam Dinners and annual women’s discernment retreat the Vocations Office organizes.

Residents commit to nine months of common living — including sharing groceries and chores — as well as a weekday schedule that includes a 5:45 a.m. Holy Hour with morning prayer in the parish’s adoration chapel, also in the house. The women then attend daily Mass before heading to classes or work.

They share three evening meals each week, and pray night prayer together each night. Then they observe “grand silence” — no talking — until after Mass the following day. Weekends are typically unstructured.

Each woman also meets with a spiritual director, and agrees not to date during this time of discernment.

They all learned about the house from the Handmaids, but — if they choose religious life — most haven’t determined which community they’d like to join. In the meantime, they’re grateful to live with women who also are discerning their call.

DeZelar, a University of Minnesota graduate who works with people with autism, said Bethany House “is more of a place to be, a place to listen to the Lord. … There really isn’t a stipulation for where you are on your walk of discerning vocation. … I’m on one end of the spectrum, really just starting and trying to be open, and Jen (Andrysczyk) is on the other end of the spectrum, like, ‘I’m ready to go.’ So I think it’s a really good place to be and learn to be where you’re at with Jesus.”

Andrysczyk, a youth minister at Maternity of Mary in St. Paul, agrees.

“Discernment can be a scary thing, but I think that hopefully this wouldn’t be a scary thing,” she said. “Being able to come here and let Jesus love you should be something that would fill you with joy. … It’s a really no pressure environment where you can come and be.”

Bittner, a registered nurse, described Bethany House as “a retreat.”

“And that’s how they really set it up to be,” she added. “We’re retreating to Jesus, and Jesus is really retreating to us more, I feel like, because he wants to be in our hearts.”

NEXT: Detroit Catholics at ‘fever pitch’ over beatification of Father Casey