Detroit Catholics at ‘fever pitch’ over beatification of Father Casey 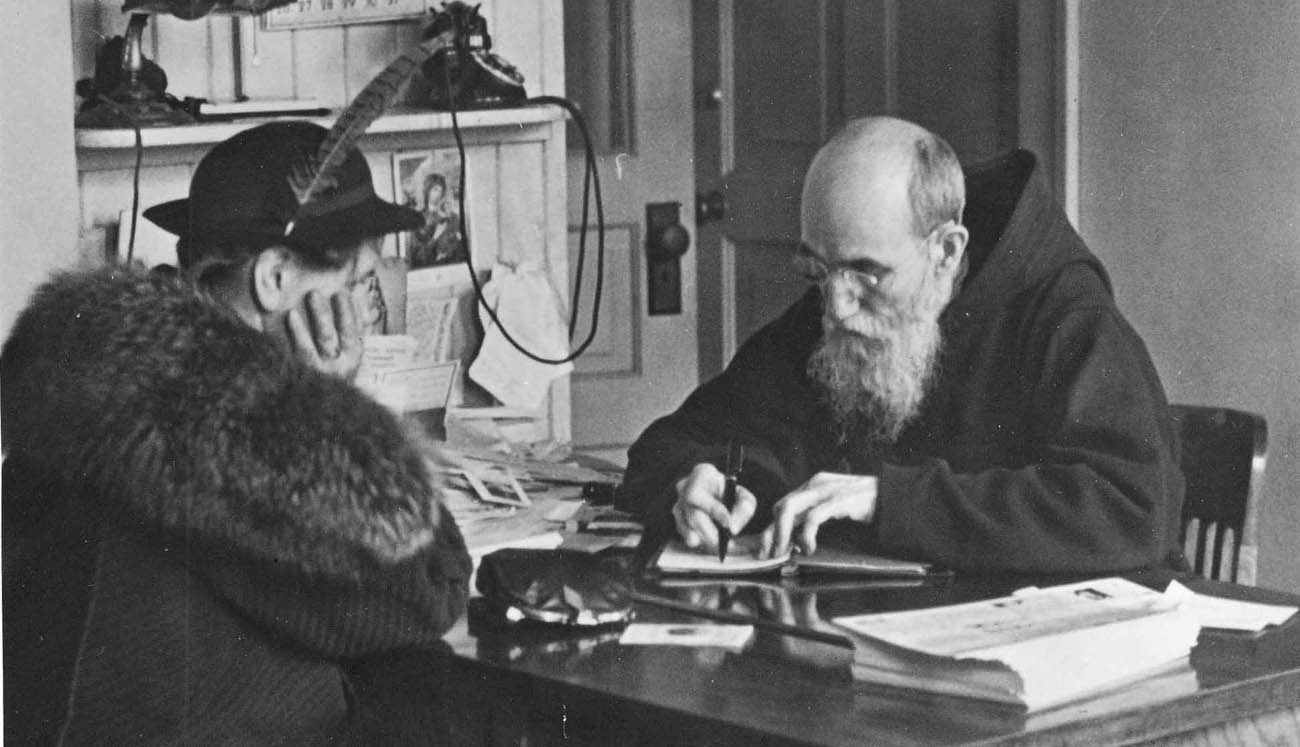 Father Solanus Casey, who will be beatified Nov. 18, records a note from a woman who visited him at St. Bonaventure Monastery in Detroit in 1941. The Capuchin Franciscan friar kept dozens of notebooks filled with prayer requests and favors from the thousands who visited him each year. (CNS photo/Archdiocese of Detroit)

DETROIT (CNS) — For decades during the Great Depression and afterward, Capuchin Franciscan Father Solanus Casey was the “go-to” guy for those who were sick, poor, afflicted or discouraged in their faith.

Standing at the doors of St. Bonaventure Monastery on Detroit’s east side, the holy friar would welcome dozens — if not hundreds — of visitors per day: families with an ill child, destitute fathers desperate to make ends meet, loved ones distraught over a relative’s drifting from the faith.

And no matter the situation — whether a healing was imminent or not — he would tell them the same thing: “Thank God ahead of time.”

Now that Father Solanus is set to be beatified Nov. 18 at Detroit’s Ford Field, home to the NFL’s Detroit Lions, the entire city is heeding his advice.

“I think excitement is at a fever pitch. Everybody is so enthused about it. I get people asking me about the occasion all the time,” said Detroit Archbishop Allen H. Vigneron in an interview with The Michigan Catholic, the archdiocesan newspaper. “The quick way the tickets were all assigned is a strong sense of the enthusiasm of the whole community.”

Indeed, it took just hours for the 66,000-seat Ford Field to “sell out” for the historic Mass — though the tickets were free — with eager Detroiters snapping up the chance to be in attendance to thank God for the gift of the friar’s extraordinary life and intercession.

“People feel a strong connection to Father. It’s like having someone in your family beatified,” Archbishop Vigneron said. “Of course, in our region that’s very understandable. But really, I think it’s across the whole country and other parts of the world, too. I think Father’s humility and his accessibility help people feel that they belong to him and he belongs to them.”

Born and raised in Wisconsin, Father Solanus joined the Capuchin order in 1897. Rejected by the diocesan seminary due to low grades, he nevertheless continued his studies toward the priesthood, and in 1904 was ordained a “simplex” priest in Milwaukee — a designation that meant he couldn’t hear confessions or preach doctrinal sermons.

While some priests might have been discouraged by a lack of faculties, which left him to do menial tasks such as answering the monastery door and recording Mass intentions, Father Solanus happily accepted God’s will for him.

“Father was able to be such a powerful vehicle for God’s marvelous healing and works because he was so transparent. There was so little of Father Solanus personally to get in the way,” Archbishop Vigneron said. “That’s really the secret behind his humbly accepting never being able to preach, never being able to hear confessions. He simply accepted who he was and said, ‘I’m happy to do whatever God wants of me.'”

As the monastery doorkeeper — first in churches and friaries around New York City and later in Detroit — Father Solanus quickly gained a reputation as a compassionate listener and intercessor during the Great Depression, and soon, dozens would arrive daily at the doors seeking “just a moment with Father.”

“Father Solanus responded very generously in some tough economic times, times that were very difficult for ordinary working people,” Archbishop Vigneron said. “He brought to them a sense of God’s presence besides the practical charity he extended.”

Soon, however, reports of miraculous favors attributed to the holy friar’s prayers began to spread throughout the region. A critically ill child would recover. A desperately needed rent check would arrive. A son serving in the war would miraculously escape danger.

To all who sought his help, Father Solanus’ trademark assurance was as simple as it was constant: He’d ask them first to pray, have faith and enroll their names in the Capuchins’ Mass intentions, and then, if he discerned God would favorably answer a prayer, would reply simply, “Don’t worry, everything will be fine.”

The late Cardinal John Dearden of Detroit opened the official cause for canonization for Father Solanus in 1976, a movement that’s been championed by each Detroit bishop since.

“I’ve always had confidence that Father would be beatified, and eventually that he’ll be canonized,” said Archbishop Vigneron, who inherited the cause from his predecessor, Cardinal Adam J. Maida. “I have no doubt about that.”

However, the possibility “became very real” when the Capuchins told the archbishop about the miraculous healing of a Panamanian woman that took place in 2012. Suffering from a severe skin disease — an affliction from which Father Solanus himself died — she visited the friar’s tomb and prayed for healing. Almost instantaneously, her disease vanished.

On May 4, Pope Francis announced the healing was authenticated as a miracle, paving the way for Father Solanus’ beatification. Though the woman has wished to remain anonymous, she will be present for the beatification Mass Nov. 18, along with others who have received favors.

Archbishop Vigneron said he takes the fact that Father Solanus was able to heal so many as a sign that “God loves Detroit” and hasn’t abandoned the city, despite its hard times.

“Not all holy people are wonder workers. That’s a special gift that God gives as He judges it appropriate,” Archbishop Vigneron said. “What I interpret this to mean, this fact that God gave Father Solanus this gift, is that he was humble enough to use it without it becoming a source of pride.

“Why does God do it? Whatever he does, whether he gives a miracle or not, it’s always about love.”

NEXT: Nation’s leaders urged to ‘engage in real debate’ on curbing gun violence