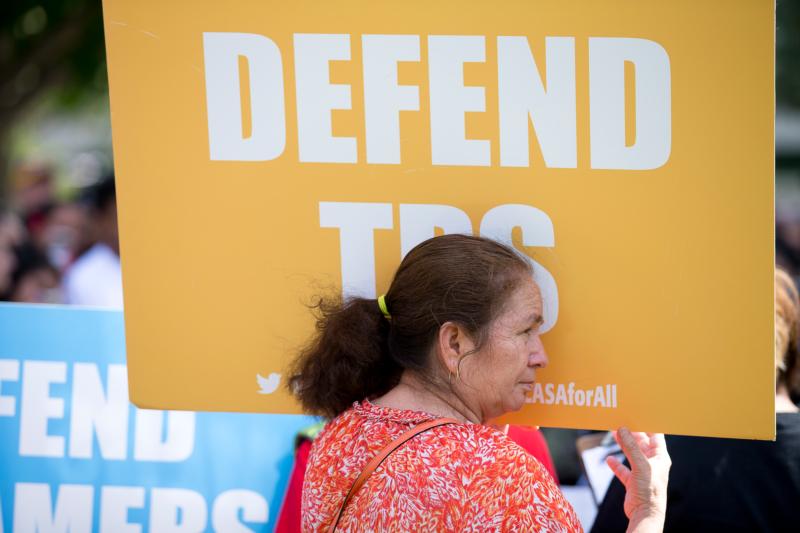 A woman holds a sign showing her support for Temporary Protected Status, or TPS, during a rally near the U.S. Capitol in Washington Sept. 26. Bishop Joe S. Vasquez of Austin, Texas, chairman of the U.S. bishops' migration committee, told the U.S. government Oct. 17 that current TPS recipients from El Salvador and Honduras "cannot return to safely to their home country at this time" and urged their TPS status be extended. (CNS photo/Tyler Orsburn)

A woman holds a sign showing her support for Temporary Protected Status, or TPS, during a rally near the U.S. Capitol in Washington Sept. 26. Bishop Joe S. Vasquez of Austin, Texas, chairman of the U.S. bishops’ migration committee, told the U.S. government Oct. 17 that current TPS recipients from El Salvador and Honduras “cannot return to safely to their home country at this time” and urged their TPS status be extended. (CNS photo/Tyler Orsburn)

WASHINGTON (CNS) — Religious leaders, including influential voices in the Catholic Church, want the Trump administration to allow immigrants who are in the United States under a special immigration status to be able to stay in the country.

The leaders are making an all-out push to the Department of Homeland Security and the White House, arguing that it would be morally unacceptable to end Temporary Protected Status for hundreds of thousands of people from the troubled countries of El Salvador, Honduras, Nicaragua and Haiti.

The status, commonly known as TPS, authorizes employment and protection from deportation. It has been extended to immigrants from the four countries, which continue to struggle with violence, economic insecurity and the aftermath of natural disasters. Some immigrants have been in the U.S. for up to 20 years and have had TPS extended by previous administrations several times.

The Trump administration must decide by Nov. 6 on TPS for Nicaraguans and Hondurans and by Jan. 8 for Salvadorans. Haitians are facing a Jan. 22 deadline to begin exiting the country when their special status will expire.

Advocates worry because Homeland Security has signaled reluctance to extend the status for other countries. In mid-September, the administration announced the end of TPS for nationals from Sudan, prompting an outcry from Catholic groups who said they will face dire circumstances upon their return.

Terminating TPS would devastate family unity because parents would be forced to leave their U.S.-born children behind and return to countries that are unable to resettle tens of thousands of people, he said during a news teleconference Nov. 1.

Citing Haiti in particular, the archbishop said that a September fact-finding trip to the Caribbean country showed that “there does not exist conditions that would be able to absorb a significant number of returnees from the United States.”

Haiti continues to struggle in recovering from a massive earthquake in January 2010 that claimed up to 300,000 lives and a hurricane in 2016 that devastated much of the southwest peninsula. Haiti also is the poorest country in the Western Hemisphere, offering few employment opportunities and leaving the vast majority of people to eke out an existence through odd jobs or subsistence farming.

“The same situation exists for the triangle countries in Central America (El Salvador, Honduras and Nicaragua),” Archbishop Wenski explained. “There’s a humanitarian reason for the administration to extend TPS. This would also give these recipients time to seek a permanent legislative solution from Congress.”

Kevin Appleby, senior director of international migration policy at the Center for Migration Studies, said during the news briefing that the administration’s immigration policy seems to be guided by a belief that rolling back protections for immigrants is in the country’s best interests.

“Part of the issue here is there are battles on many fronts in this administration. They’re going with due speed to remove any protections that they can unilaterally for immigrants in this country,” he said.

He said even though TPS may end for the immigrants, it is unlikely they will automatically return home and instead would add to the number of people in the U.S. illegally, causing the federal government to expend resources on people who would no longer be officially registered by the government.

The faith community has been rallying forces to approach Congress and the White House to not just extend TPS on moral grounds, but to enact comprehensive immigration reform to protect people already in the country, Appleby said.

Rabbi Elizabeth Richman, deputy director of Washington-based Jews United for Justice, who also was on the call, agreed that humanitarian concerns dictate that the hundreds of thousands of immigrants from the four countries have their status extended.

“There’s consensus across religious communities (on the issue),” she said. “The administration should be following their lead and that this is a moral issue and a humanitarian issue.”

Political and economic reasons also were cited during the call.

“Terminating TPS would certainly undermine our regional and international interests,” said Appleby, former director of migration policy and public affairs at the U.S. Conference of Catholic Bishops. He said about 88 percent of the people from the four countries under TPS are gainfully employed and send remittances home, contributing to local economies.

The leaders of four major Catholic advocacy and aid agencies sent a letter Oct. 31 to Elaine Duke, acting secretary of the Department of Homeland Security, seeking the extension of TPS for people from Honduras and El Salvador.

“Terminating TPS at this time would be inhumane and untenable,” said the letter, which was from the heads of Catholic Relief Services, Catholic Charities USA and the Catholic Legal Immigration Network and Bishop Joe S. Vasquez of Austin, Texas, chairman of the bishops’ Committee on Migration.

Extending TPS “will allow Hondurans and Salvadorans to continue to legally work, contribute to U.S. communities in an authorize capacity and maintain safe, stable lives, and human dignity for their families, many of which include U.S. citizens,” the letter said. “We ask you to show compassion and patience as Honduras and El Salvador continue to improve their citizen security and humanitarian capacity for reception, protection and integration.”

Archbishop Wenski said the times call for the U.S. to step back from policies that turn away immigrants.

PREVIOUS: Priest resigns as consultant to U.S. bishops after letter to pope