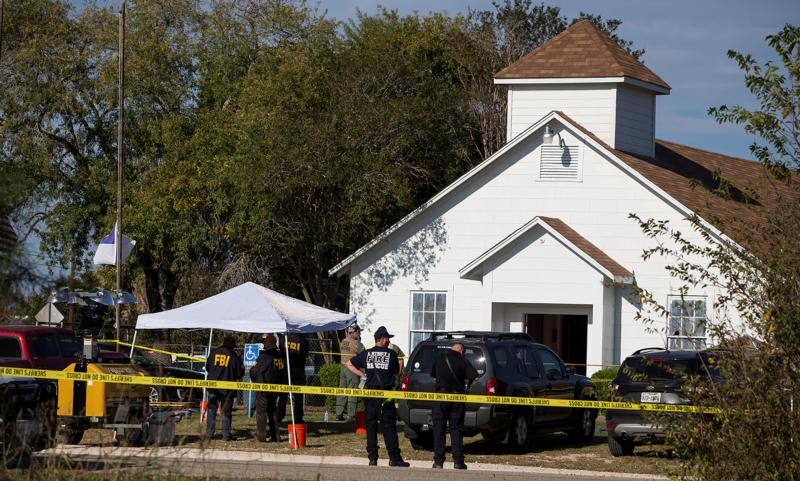 WASHINGTON (CNS) — The Nov. 5 deadly shootings at the First Baptist Church in Sutherland Springs, Texas, left many people wondering how something so horrific could happen in a place of worship.

It also called to mind other shootings or attacks in recent years in sacred spaces, including the nine people killed in 2015 at Emanuel African Methodist Episcopal Church in Charleston, South Carolina, the murder of a priest in northern France during Mass last year, and violent acts at synagogues and mosques.

On the same day as the Texas church shooting when 26 people were killed and more than 20 were wounded, another shooting already had taken place in the parking lot of a Catholic church in Fresno, California. After a 7:30 a.m. Mass at St. Alphonsus Church, a man shot his estranged wife and her boyfriend in a car. The woman died from the gunshot wound and the man died from his wounds later at the hospital. The shooter fled the scene and took his own life.

Father Dominic Rajappa, the parish priest who had been greeting people after Mass when the shots were fired, told a local television reporter the church decided not to cancel other Masses that morning and prayed for the victims during each Mass.

Carl Chinn, a church security consultant in Colorado Springs, Colorado, keeps tabs on attacks at places of worship and says incidents of violence have increased on religious properties in recent years.

He speaks from experience, not just research. In 1996, he was taken hostage with three others when he was a building engineer for Focus on the Family, a Christian multimedia organization in Colorado Springs. No one was injured, but the experience changed his life and brought him to his current ministry, as he describes it.

Chinn also was part of a response team at New Life Church in Colorado Springs in 2007 when a man killed two people and injured three others when he started shooting outside the church after a Sunday service.

Chin has written a book on church security and gives seminars around the country about it. He said Catholics sometimes attend, but not too often, and he said the idea of implementing church security measures seems to be the decision of individual church leadership. More often than not, he said, “they have not grasped the need for it or made it a priority.”

He advises churches to put together volunteer security teams to focus, almost like federal air marshals, on keeping an eye out for anything unusual, or anything “dlg,” which is security lingo for “don’t look good.”

He also urges churches to keep their security plan simple — “not something that would fill up a three-ring binder.” The security team can be the “eye and ears” of the church — armed if they can be — and properly trained.

When Chinn spoke with Catholic News Service Nov. 8, he was in Sutherland, Texas, in the parking lot of the First Baptist Church, the crime scene still marked with yellow police tape. He spent the past two days there talking with people who wonder what went wrong and how to move on.

Jimmy Meeks, who runs a church security ministry called Sheepdog Seminars, based in Fort Worth, Texas, also was spending a few days in Sutherland on the ground talking with people.

He told CNS the difficult thing for many people to grasp is why God didn’t protect them since they were at the church to pray. One woman he spoke to said she lost her faith after her aunt and uncle were killed in the church that day.

Meeks said church leaders should protect their congregations. He has been getting nonstop calls about how to do this since the Texas shooting, but he also knows interest in such measures will decrease in a few weeks.

He doesn’t get calls from Catholics. And as he put it: “They very seldom show up” at his seminars.

But that doesn’t mean Catholics aren’t thinking about church safety.

Mary Tichy, associate director for the Conference for Catholic facility management in St. Louis, said in a Nov. 9 email that the group’s upcoming conference in April will include an education track on security. She also said she is aware of the security measures in place at some Catholic churches and diocesan offices.

A Nov. 6 story in the Chicago Tribune said that in the past year, hundreds of congregations have joined a coalition called Secure Church Chicago, a regional working group of Protestant, Catholic and Jewish clergy and volunteers who want to take a proactive, professional and pastoral approach to church safety.

The article ran a photo of a former Chicago police officer who is the public safety director for St Peter’s Catholic Church in Chicago. It also quoted the church’s pastor, Franciscan Father Kurt Hartrich, as saying he doesn’t know what more he can do to keep his parishioners safe since “they already have to cross two thresholds and pass muster with security guards before they can enter the worship space.”

The Boston Archdiocese said in a Nov. 6 statement that it is “committed to seeing that our parishes, schools and ministries take appropriate steps to ensure the safety and security of parishioners, staff, volunteers and visitors. This is especially relevant considering recent tragic events and the current environment in which we live.”

It said parishes and schools “work with their local safety and security advisory committees, staff, volunteers and local responders to be prepared and vigilant” and do this “in consultation with the Archdiocesan Office of Risk Management.”

“We are welcoming communities of faith committed to being of service to the mission of the church while recognizing the challenges our entire society faces in these turbulent times,” the statement added. “We continue to pray for all impacted by the tragedy in Sutherland Springs.”