Youth, religious, priests encourage each other at conference to hear call 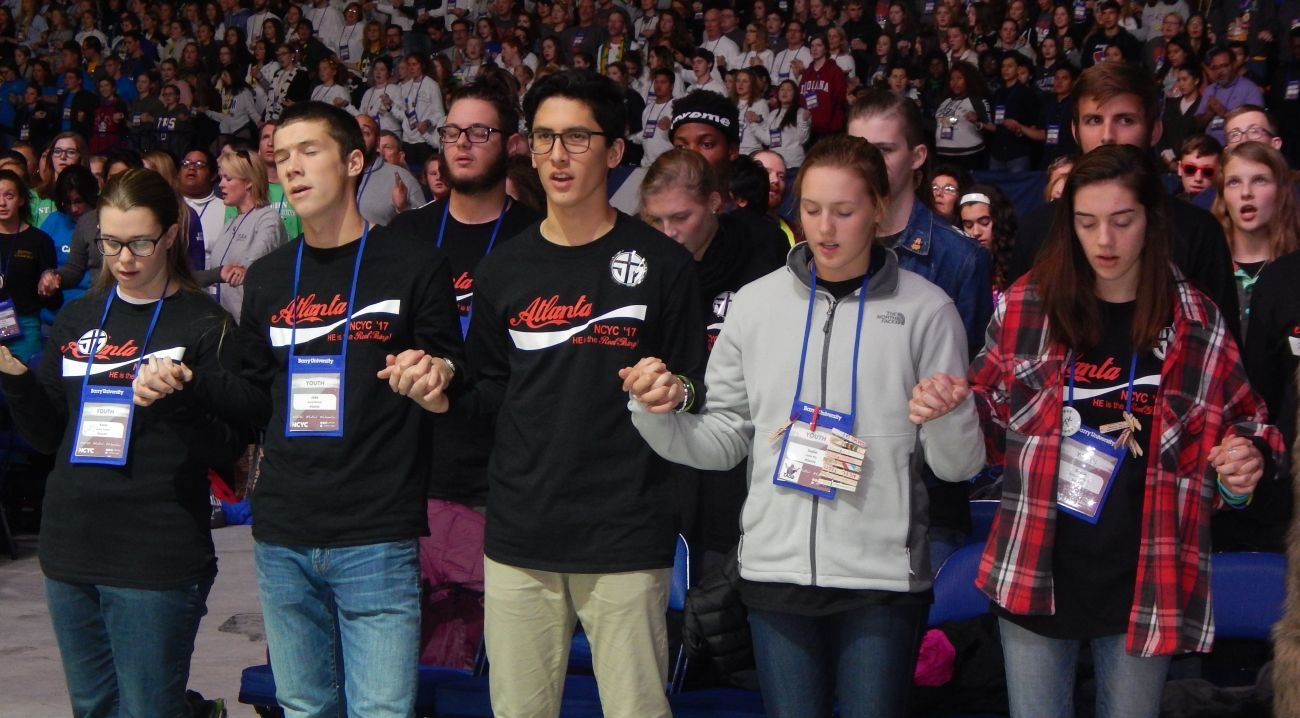 Teenagers from the Archdiocese of Atlanta hold hands during the Lord's Prayer at the Nov. 18 closing Mass of the National Catholic Youth Conference in Lucas Oil Stadium in Indianapolis. More than 20,000 teenagers from across the country attended the three-day gathering. (CNS photo/Mike Krokos, The Criterion)

INDIANAPOLIS (CNS) — The theme of the National Catholic Youth Conference in Indianapolis was “Called.”

So it was appropriate that the more than 20,000 Catholic youths gathered Nov. 16-18 from across the country gave a bit more attention to the many priests and men and women religious who prayed with them, listened to inspiring presentations with them and had fun with them during the conference.

Maybe God was using that interaction to call the youths to give prayerful reflection to a religious vocation.

“Here we’re able to see their real personalities come out,” said Lillieyne Thompson of the Gary Diocese. “They’re seen more as real people and not just as a holy figure. You see how they’re cool and do normal things like everyone else does.

“It helps me realize that I can follow God. You can have a fun life, be yourself without the peer pressure of high school,” she told The Criterion, newspaper of the Archdiocese of Indianapolis. “Seeing how cool all the priests are is so inspiring.”

The priests and religious present at NCYC also represented more dioceses and religious communities than any of the young participants could know in their homes.

“There’s a lot of not knowing what’s out there,” said Oliver Severance of the Archdiocese of Anchorage, Alaska. “Coming to a place like this, you get to realize that they’re not super far away, stuck in an abbey somewhere. It makes them more accessible. Once you get that realization, it’s easier to go from not knowing what your vocation is to starting to discern and then choose one.”

“A lot of young people don’t recognize that they have a vocation or might not even want to know what it is unless they get exposed to different religious groups or missionary groups,” he said. “People here are willing to share about their vocations. The best way to get more vocations is to share about each other’s vocations.

“It’s encouraging, because, as Salesians, we work with young people. So when we see young people see that they have a potential to be better, to become saints, then that’s when our mission gets fulfilled.”

Other religious at NCYC shared the encouragement experienced by Brother Damien.

“Young people today are so open to their faith and seem to have a passion for living it, not only in the Church, but also in service,” said Sister Jean Rhoads, a Daughter of Charity, who lives in Evansville, and serves as a vocations director for her order. “I am hope-filled and encouraged by that. Is this not the most exciting thing in the church today?”

Conventual Franciscan Father John Bamman came to the conference from Mount St. Francis in southern Indiana, where he serves as the vocations director for his order’s Our Lady of Consolation Province.

He reflected on how the encouragement he gives youths at NCYC to consider a religious vocation often happens simply through being present to them during the conference.

“You never know the effect you have,” said Father John. “I see this as planting seeds. We’re kind of throwing seeds into the wind, and see where they’ll settle. There’s a lot of soil here. For them to see a joyful friar, that’s perfect. That’s enough.”

Seminarian Liam Hosty can speak to the effect that NCYC can have on young people trying to hear God’s call in their lives.

He attended two of the conferences while a student at Roncalli High School in Indianapolis. At the time, he was thinking that God might be calling him to the priesthood, but he wasn’t sure about it.

He added, “It definitely ramped up my faith. It was absolutely incredible to witness 20,000 youths on fire from all across the country, seeing amazing speakers and having the sacraments available.”

As a seminarian, he participated in his third straight NCYC, but this time as a volunteer, assisting at liturgies and in the room in the Indiana Convention Center where dozens of priests and bishops heard confession.

“It’s life-giving just seeing the young church alive,” Hosty said. “It’s incredible. It’s really cool to be on the other side of the fence trying to help out and kind of give back what all the seminarians and priests gave to me in NCYC.”