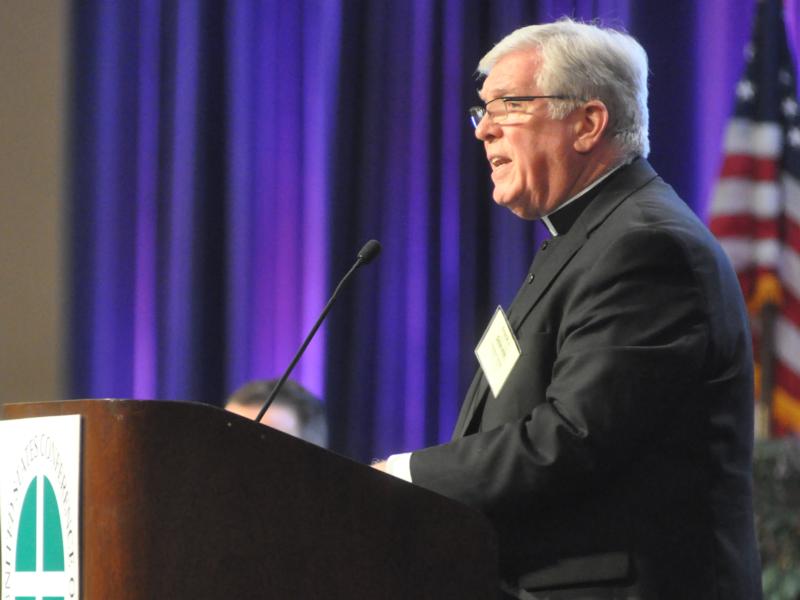 WASHINGTON (CNS) — The chair of the U.S. bishops’ Committee on Domestic Justice and Human Development likes some of the provisions of the Senate’s tax bill, but those likes are dwarfed by items that he said run afoul of Catholic teaching.

“The Senate proposal is fundamentally flawed as written and requires amendment,” said Bishop Frank J. Dewane of Venice, Florida, in a Nov. 22 letter addressed to senators, who are expected to take up consideration of the bill after they return from Thanksgiving recess.

Bishop Dewane cited St. John XXIII’s encyclical “Mater et Magistra,” which said that “decisions about taxation involve fundamental concerns of ‘justice and equity,'” and the Compendium of the Social Doctrine of the Church, which said public spending should serve as “an instrument of development and solidarity.”

And that is where the Tax Cuts and Jobs Act, as the bill is called, falls short. The bill, “as written, will raise income taxes on the working poor while simultaneously providing a large tax cut to the wealthy,” Bishop Dewane said. “Tax breaks for the financially secure, including millionaires and billionaires, should not be made possible by increased taxes to families struggling to meet their daily needs.”

Among the many shortcomings Bishop Dewane highlighted for senators in his letter:

— With the repeal of the Affordable Care Act’s individual insurance mandate in the bill, “tax reform should not become the vehicle for a partial health care reform that fails to address significant problems in our health care system while exacerbating other difficulties,” Bishop Dewane said.

— “This bill appears to make families that have several children worse off. One of the most significant problems for larger families is the elimination of the personal exemption,” he added. “A change in the tax code should not place families in a worse situation because they have welcomed the gift of life.”

— The Senate bill, like the House version passed earlier in November, “creates stricter rules around children’s Social Security numbers for the child tax credit, making it unjustly difficult for immigrant taxpayers to receive the benefit,” he noted.

The bill “raises taxes on the working poor, while simultaneously providing large tax breaks to high-income taxpayers,” Bishop Dewane said. “In the years that the working poor suffer a tax increase under this bill, millionaires and billionaires will see significant tax decreases. This must change.”

“This tax plan, by design, will result in a nearly $1.5 trillion deficit over 10 years. Even with the potential benefits of economic growth from individual and corporate tax cuts — which cannot be guaranteed — the poor should not be the ones to finance these changes,” he added. “The bill should be fixed so that the risks taken fall on those who stand to benefit most, rather than on those who struggle on the margins of society.”

One principle Bishop Dewane wants the bill to follow: “The tax code should encourage voluntary association, mutual aid and a culture of giving, helping rather than hurting groups that will be asked to do more for the poor in the days ahead.”

There were some items Bishop Dewane liked in the bill. “The above-the-line deduction for educator expenses was expanded from $250 to $500, and this is a praiseworthy change,” he said.

“The Senate bill avoids some of the pitfalls of the House bill by not tampering with the adoption tax credit or the exclusion for employer adoption assistance programs, and by retaining the out-of-pocket medical expenses deduction, which is a lifeline for families facing serious and chronic illnesses,” Bishop Dewane added.

“It is laudable that, like the House bill, this tax plan recognizes the child in utero by allowing contributions to a 529 savings plan before birth,” Bishop Dewane said, but that the provision sunsets in 2025 and “unlike the House bill,” it also “does not allow a 529 plan to go toward tuition payments for K-12 education.”

“It is also encouraging to see tax incentives for employers to provide paid family and medical leave, but this provision is scheduled to sunset at the end of 2019,” he added.

“Doubling the standard deduction will bring tax relief to many people, and this is a good feature,” Bishop Dewane said. “However, for those who give to charity, it will make the charitable deduction increasingly a benefit only available to high income families.”

He added he liked that the Senate bill “retains the Housing Credit and Housing Bonds that go toward the development of low-income housing, and takes some additional laudable measures to strengthen them, the credit will still be significantly devalued due to the lower corporate tax rate, and without further enhancement, development of low-income housing will likely be stifled.”

PREVIOUS: Youth, religious, priests encourage each other at conference to hear call

NEXT: Day of prayer leads focus on plight of persecuted Christians