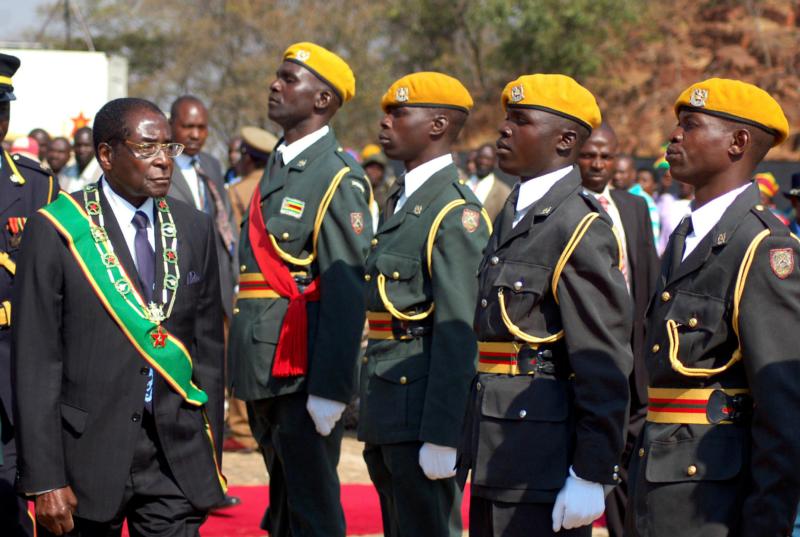 Father Fidelis Mukonori, parliamentary liaison officer for Harare Archdiocese, is trying to mediate a graceful exit for the 93-year-old president, who has led Zimbabwe for 37 years.

He said Father Mukonori was not at a Nov. 15 meeting of the Zimbabwe Heads of Christian Denominations, who called for an interim government to be formed to “oversee the smooth transition to a free and fair election.”

The church leaders, including Father Chiromba, said they wanted to make it clear to the military “that it is their responsibility to ensure that human dignity and rights are respected.”

Earlier that day, Zimbabwe’s army seized control of the government, with a spokesman giving assurances on national television that they were “only targeting criminals” around Mugabe; he said the president and his family were safe.

Mugabe’s policies are widely blamed for Zimbabwe’s economic decline over the past two decades. Millions of economic refugees have left the country, with most going to South Africa.

The Christian leaders said many Zimbabweans are “confused and anxious about what has transpired and continues to unfold in our nation.”

They said there is “no way we can go back to the political arrangements we had some days ago. We are in a new situation.”

“While the changes have been rapid in the last few days, the real deterioration has been visible for everyone to see for a long time,” they said.

They called for calm and urged people not to spread misinformation, particularly on social media, because it leads to “despondency and fear.”

The Christian leaders said Zimbabwe could use this crisis as an opportunity and called for a national dialogue.

There is “no chasm that is too big not to be crossed through the power of reconciliation,” said the statement from Christian leaders. They noted that, “without reconciliation and openness to a process of shared national envisioning, we are all doomed.”

The situation can be used “as an opportunity for us to find one another to build something that is permanently healing for our nation,” they said.

Bishop Abel Gabuza of Kimberley, who chairs the Southern African Catholic Bishops’ Conference justice and peace commission, said the military action in Zimbabwe was “not expected.”

“We are very disturbed at what’s happening” in neighboring Zimbabwe, he told CNS in a Nov. 15 telephone interview from Pretoria, noting that “it has all the ingredients of a coup.”

“This is the price one pays when the democratic process has been undermined for so long,” Bishop Gabuza said.

He expressed concern for the safety of people in Zimbabwe.

“We hope a resolution is found soon,” he said, noting that the southern African region needs a “politically and economically stable Zimbabwe.”

“Some are excited now and are saying that it doesn’t matter” where this change comes from, Khumalo said. “But running a country through martial law sets a bad precedent. This is unconstitutional, and Zimbabwe needs to look urgently at how it can return to civilian rule.”

Khumalo told CNS that “people with degrees are standing on the side of Harare’s streets selling airtime, if they haven’t yet managed to get out of the country.”

“Zimbabweans are becoming more and more impoverished,” he said, noting that “Zimbabwe doesn’t even have its own currency, and obtaining cash is very difficult now.”

In an early November joint statement, the Zimbabwe bishops’ conference and the Zimbabwe Council of Churches said the country’s politics had become “poisonous, and there is no more civilized debate in our institutions.”

Political opposition is treated as treachery by Mugabe’s government, they said.

Reuters, the British news agency, reported that on Nov. 13, Gen. Constantino Chiwenga said the army refused to accept the firing of Zimbabwean Vice President Emmerson Mnangagwa and the purging of his supporters.

Mnangagwa, a former security chief, was ousted early November to pave the way for Mugabe’s 52-year-old wife, Grace, to succeed him.