Mass and lunch: Pope to lead celebration of World Day of the Poor 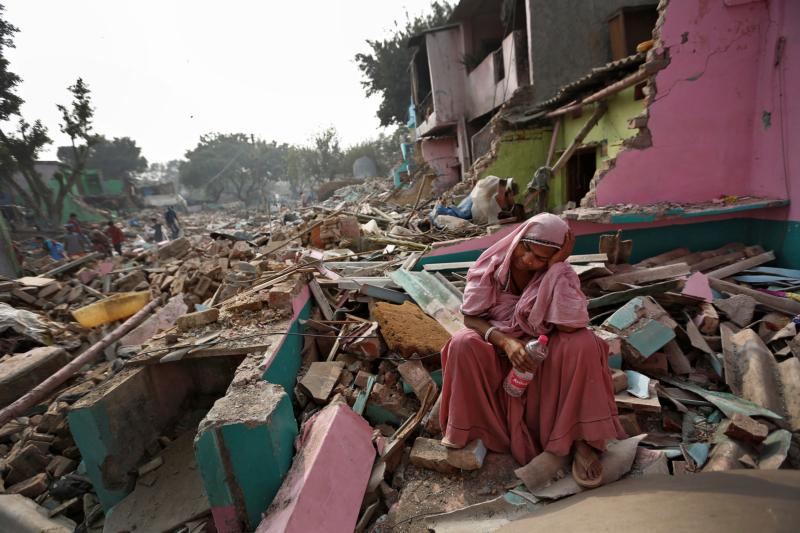 A woman in Delhi, India, reacts amid the rubble of her home destroyed by local authorities in a bid to relocate the residents in this Nov. 2 photo. Pope Francis will celebrate the Catholic Church’s first World Day of the Poor Nov. 19. (CNS photo/Cathal McNaughton, Reuters)

VATICAN CITY (CNS) — Pope Francis will celebrate the Catholic Church’s first World Day of the Poor Nov. 19 by celebrating a morning Mass with people in need and those who assist them. After Mass, he will offer lunch to 500 people in the Vatican audience hall.

As the Year of Mercy was ending in November 2016, Pope Francis told people he wanted to set one day aside each year to underline everyone’s responsibility “to care for the true riches, which are the poor.”

The result was the World Day of the Poor, which is to be marked annually on the 33rd Sunday of ordinary time on the church’s liturgical calendar.

An admonition from St. John Chrysostom “remains ever timely,” Pope Francis said in a message for the 2017 celebration. He quoted the fifth-century theologian: “If you want to honor the body of Christ, do not scorn it when it is naked; do not honor the eucharistic Christ with silk vestments and then, leaving the church, neglect the other Christ suffering from cold and nakedness.”

The Pontifical Council for Promoting New Evangelization is coordinating the celebration and issued a resource book — available online at www.pcpne.va — that includes Scripture meditations, sample prayer services and suggestions for parishes and dioceses.

An obvious starting place, the council said, is to reach out “to places such as soup kitchens, shelters, prisons, hospitals, nursing homes, treatment centers, etc., so that the words of the pope could arrive to everyone at the same time on this day.”

Every parish and Catholic group, it said, should organize at least one practical initiative, such as “taking groceries to a needy family, offering a meal for the poor, purchasing equipment for elderly persons who are not self-sufficient, donating a vehicle to a family, or making a contribution to the Caritas fund for families.”

One of the primary goals of the day, the council said, is to help Catholics answer the question, “Who are ‘the poor’ today, and where are they around me, in the area in which I live?” and then to find ways to share and create relationships with them.

The resource book also offered 18 “saints and blesseds of charity of the 20th and 21st centuries” as examples. The list is led by St. Teresa of Kolkata, but also includes Blessed Oscar Romero of San Salvador and U.S. St. Katharine Drexel and Blessed Stanley Rother.