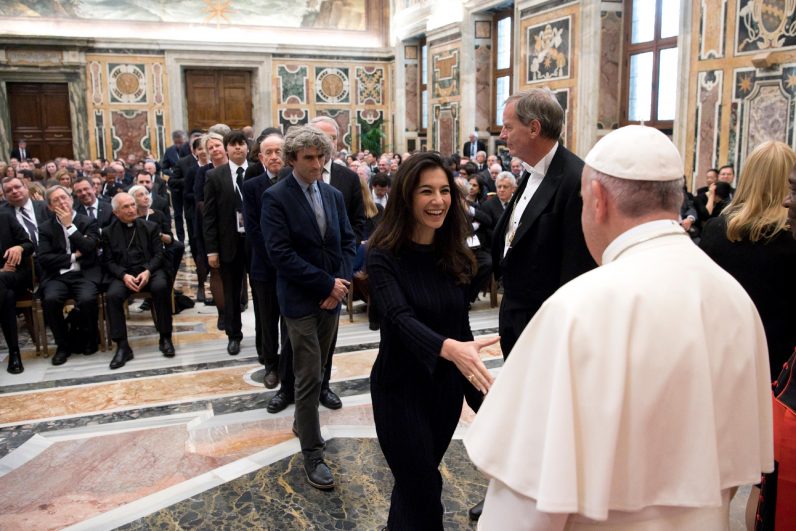 Pope Francis greets people attending a conference on building a world free of nuclear weapons, at the Vatican Nov. 10. The conference brought together 11 Nobel laureates, top officials from the United Nations and NATO, diplomats from around the world, experts in nuclear weapons and the disarmament process, scholars, activists and representatives of bishops’ conferences. (CNS photo/L’Osservatore Romano) See POPE-NUCLEAR-CONFERENCE Nov. 10, 2017.

“The threat of their use as well as their very possession is to be firmly condemned,” the pope told participants at a conference on nuclear disarmament hosted by the Vatican.

For years, popes and Catholic leaders had said the policy of nuclear deterrence could be morally acceptable as long as real work was underway on a complete ban of the weapons. In condemning possession of the weapons, Pope Francis seemed to indicate that deterrence is no longer acceptable.

Nuclear weapons “exist in the service of a mentality of fear that affects not only the parties in conflict but the entire human race,” he said Nov. 10.

The conference, sponsored by the Vatican Dicastery for Promoting Integral Human Development, brought together 11 Nobel laureates, top officials from the United Nations and NATO, diplomats from around the world and experts in nuclear weapons and the disarmament process. They were joined by scholars, activists and representatives of bishops’ conferences, including Stephen Colecchi, director of the U.S. bishops’ Office of International Justice and Peace.

Several speakers, including Masako Wada, one of the last survivors of the U.S. atomic bombing of Hiroshima in 1945, were to discuss the suffering wrought by nuclear arms.

Pope Francis told the group that the “essential” witness of survivors of the bombings in Japan as well as those suffering the effects of nuclear weapons testing are prophetic voices that serve “as a warning, above all for coming generations.”

In his speech, the pope said that when it comes to the ideal of a nuclear-free world, a “certain pessimism” exists and brings with it “considerable expense” as nations modernize their nuclear arsenals.

“As a result, the real priorities facing our human family, such as the fight against poverty, the promotion of peace, the undertaking of educational, ecological and health care projects, and the development of human rights, are relegated to second place,” he said.

Pope Francis said the existence of weapons whose use would result in the destruction of humanity “are senseless even from a tactical standpoint.”

What is more, he said, there is the growing danger that the weapons or weapon technology could fall into the wrong hands.

“The resulting scenarios are deeply disturbing if we consider the challenges of contemporary geopolitics, like terrorism or asymmetric warfare,” he said.

With the ongoing tensions surrounding North Korea’s nuclear ambitions, the Vatican conference came at a time Pope Francis described as one of “instability and conflict.”

But despite the troubling global scenario, he continued, initiatives such as the U.N. Treaty on the Prohibition of Nuclear Weapons, provide a dose of “healthy realism” that “continues to shine a light of hope in our unruly world.”

The treaty, which would enter into force 90 days after at least 50 countries both sign and ratify it, bans efforts to develop, produce, test, manufacture, acquire, possess or stockpile nuclear weapons or other nuclear explosive devices.

Although as of Sept. 20 the treaty had been signed by more than 40 countries, including the Holy See, the United States and other countries possessing nuclear weapons did not take part in the negotiations and do not plan to sign it.

Nevertheless, Pope Francis urged the international community “to reject the culture of waste” and place care for people suffering “painful disparities “over “selfish and contingent interests.”

Progress, he said, “that is both effective and inclusive can achieve the utopia of a world free of deadly instruments of aggression, contrary to the criticism of those who consider idealistic any process of dismantling arsenals.”

At a pre-conference event in Rome Nov. 9, Jesuit Father Drew Christiansen, professor of ethics and global human development at Georgetown University, and Carole Sargent, director of the university’s Office of Scholarly Publications, outlined what they saw as major progress in 2017 toward a ban on nuclear weapons.

The work of grass-roots movements and organizations, including the International Campaign to Abolish Nuclear Weapons, which won the Nobel Peace Prize, has been particularly important, Father Christiansen said.

And not to be ignored are hundreds of Catholic women religious who have engaged in major protests, but also dedicated lobbying efforts. Sargent has been researching the grassroots involvement of women religious, especially in Japan, the United States and Great Britain.

The Vatican conference, Father Christiansen said, could be a major push in getting the new U.N. Treaty on the Prohibition of Nuclear Weapons “supported around the world.”

Speaking to journalists before the start of the conference, Mohamed ElBaradei, Nobel laureate and former director general of the International Atomic Energy Agency, commented on tensions between U.S. President Donald Trump and North Korea’s leader, Kim Jong Un, and the threat of nuclear war.

In August, Trump threatened to unleash “fire and fury like the world has never seen” in response to North Korea’s announcement that it had created a nuclear warhead small enough to fit on an intercontinental ballistic missile. Kim responded to Trump’s “fire and fury” talk by saying his country was preparing to fire missiles into the waters around Guam, a U.S. territory in the western Pacific Ocean with two military bases.

When asked for his response on the possibility of a U.S.-North Korea nuclear conflict, ElBaradei had few words. 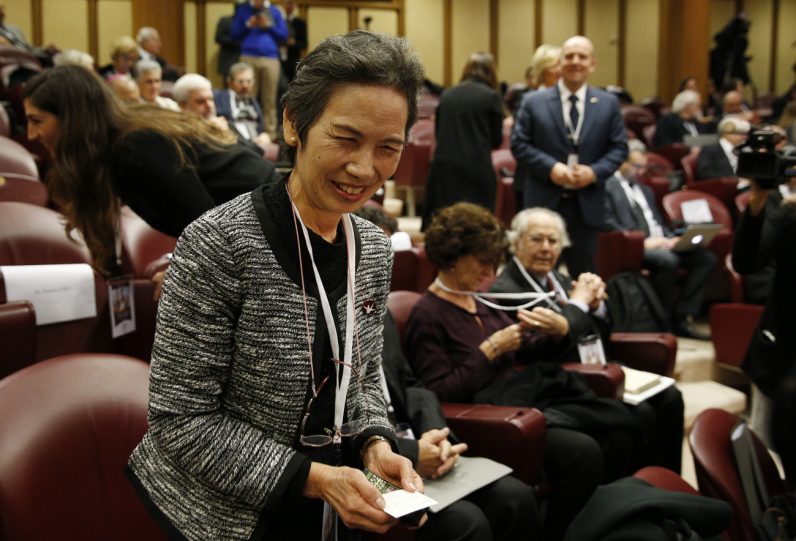 Masako Wada, who survived the 1945 atomic bombing of Nagasaki, Japan, attends a conference on building a world free of nuclear weapons, at the Vatican Nov. 10. The conference brought together 11 Nobel laureates, top officials from the United Nations and NATO, diplomats from around the world, experts in nuclear weapons and the disarmament process, scholars, activists and representatives of bishops’ conferences. (CNS photo/Paul Haring)

***
Cindy Wooden in Rome contributed to this story.

PREVIOUS: Pope recognizes martyrdom of sister killed in Somalia in 2006

NEXT: Mass and lunch: Pope to lead celebration of World Day of the Poor