Pope urges bishops to exercise authority as judges in annulments 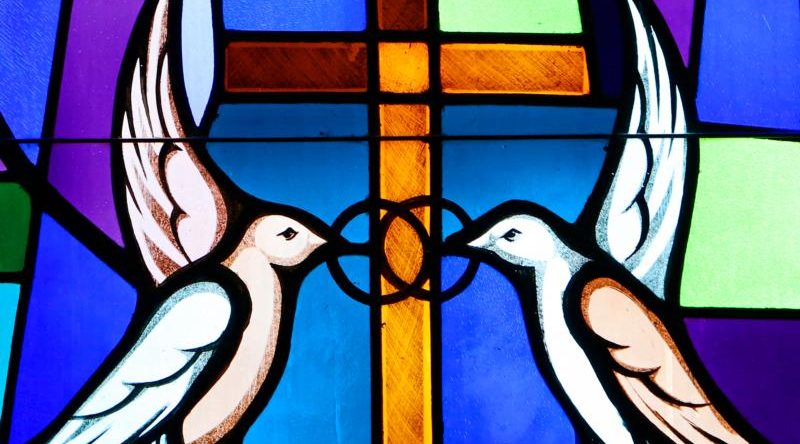 Doves and interlocking wedding bands symbolizing the sacrament of marriage are depicted in a stained-glass window at Sts. Cyril & Methodius Church in Deer Park, N.Y. A diocesan bishop is the sole judge in the streamlined process for handling marriage annulments, Pope Francis said. (CNS photo/Gregory A. Shemitz)

The simplified process “is not an option that the diocesan bishop can choose, but rather an obligation that derives from his consecration and from the mission received,” making the bishop the sole and exclusive authority in charge throughout the three phases of the briefer process, the pope said.

The pope made his remarks during an audience Nov. 25 with canon lawyers, priests and pastoral workers attending a course sponsored by the Roman Rota, a Vatican tribunal that mainly deals with marriage annulment cases. (See an English translation of the pope’s remarks here.)

The pope encouraged them to be close to those who are suffering and who expect help “to restore peace to their consciences and God’s will on readmission to the Eucharist.”

The new process “is an expression of the church that is able to welcome and care for those who are wounded in various ways by life and, at the same time, it is an appeal for the defense of the sacredness of the marriage bond,” he said.

Pope Francis used the occasion to clarify and strongly emphasize how a bishop should not delegate completely the duty of deciding marriage cases to the offices of his curia, especially in the streamlined process for handling cases of clear nullity that were established with new norms that took effect at the end of 2015. The norms were outlined in two papal documents, “Mitis Iudex Dominus Iesus” (“The Lord Jesus, the Gentle Judge”) for the Latin-rite church and “Mitis et misericors Iesus,” (“The Meek and Merciful Jesus”) for the Eastern Catholic churches.

Pointing out the clear role of the diocesan bishop as sole judge in the briefer process was meant to help apply the new laws and increasingly recover an appropriate practice of synodality, he said.

The diocesan bishop has always been charged with exercising judicial power personally or through others; but, the pope said, that principle has been interpreted in such a way that the bishop no longer personally exercises that power and delegates “almost everything to the tribunals.”

Given the unique nature of the abbreviated process in determining the nullity of marriages, the pope set out a number of points that he deemed to be “decisive and exclusive in the personal exercise of the role of judge by the diocesan bishop.”

The abbreviated process was instituted not to facilitate annulments, but to simplify and speed up the processes necessary to determine and declare the truth about the nullity of a marriage, in other words, declaring that it never existed as a valid sacrament.

The changes, the pope wrote in 2015, were motivated by “concern for the salvation of souls,” and particularly “charity and mercy” toward those who feel alienated from the church because of their marriage situations and the perceived complexity of the church’s annulment process.

NEXT: Prayers offered for victims of ‘monstrous’ Egyptian mosque attack