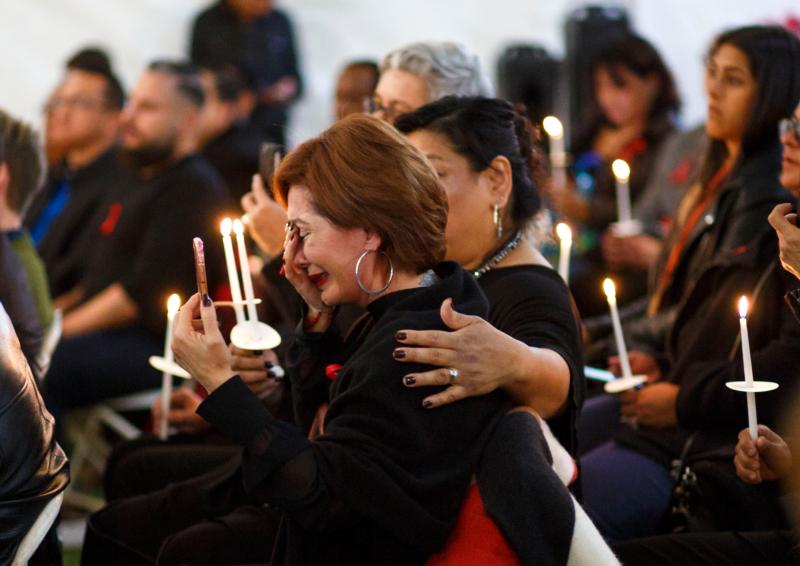 Visitors hold candles during a World AIDS Day gathering at the Las Memorias AIDS Monument in Los Angeles Dec. 1. The U.S. Conference of Catholic Bishops and Catholic Relief Services released a joint letter that same day acknowledging the great strides made regarding the AIDS epidemic, but also emphasized any reduction in U.S. government funding of such programs could have catastrophic life-threatening implications. (CNS photo/Eugene Garcia,EPA)

WASHINGTON — Saying that any reduction in funding of programs to prevent HIV and AIDS could have “catastrophic life-threatening implications,” Archbishop Timothy P. Broglio, chair of the U.S. Conference of Catholic Bishops’ Committee on International Justice and Peace, asked the Office of Management and Budget, in a letter, to maintain its full funding.

“At a moment when we are finally witnessing great success in turning back a disease that shocked the world only a generation ago, any cuts in funding would directly result in a reduction in the number of people living with HIV who are added to treatment each year, and could trigger a resurgence in the global epidemic,” the letter said.

They specifically ask that the government continue to fund the President’s Emergency Plan for AIDS Relief, known as PEPFAR, and the Global Fund to at least current levels.

President George W. Bush launched PEPFAR in 2003 as a way to deal with the HIV and AIDS pandemic. The Global Fund to Fight AIDS, Tuberculosis and Malaria is a Geneva-based organization aimed at fighting the diseases throughout the world.

In a “skinny budget” unveiled in May, dubbed skinny because of the cuts it proposed, the Trump administration said it wanted to cut the programs by 17 percent, from $4.6 billion in the current budget to $3.8 billion.

Reducing the funding “would diminish the progress we have made,” the letter said.

“Despite enormous gains, millions of lives still hang in the balance,” it said. “This also extends to 16 million children who have lost one or both parents due to AIDS-related illnesses, and millions more children who are vulnerable because the disease has contributed to malnutrition, cognitive delays, stunting, lack of education or poor physical or mental health.”

Thanks to such programs, about 21 million people around the world have access to treatment, and officials have seen a reduction of 56 percent in new infections in children in Eastern and Southern Africa and a 47 percent reduction worldwide, the letter says.

“Cutting back on our investment will translate to millions of lives lost, unimaginable suffering and billions more dollars in expense and lost economic growth,” the letter says.