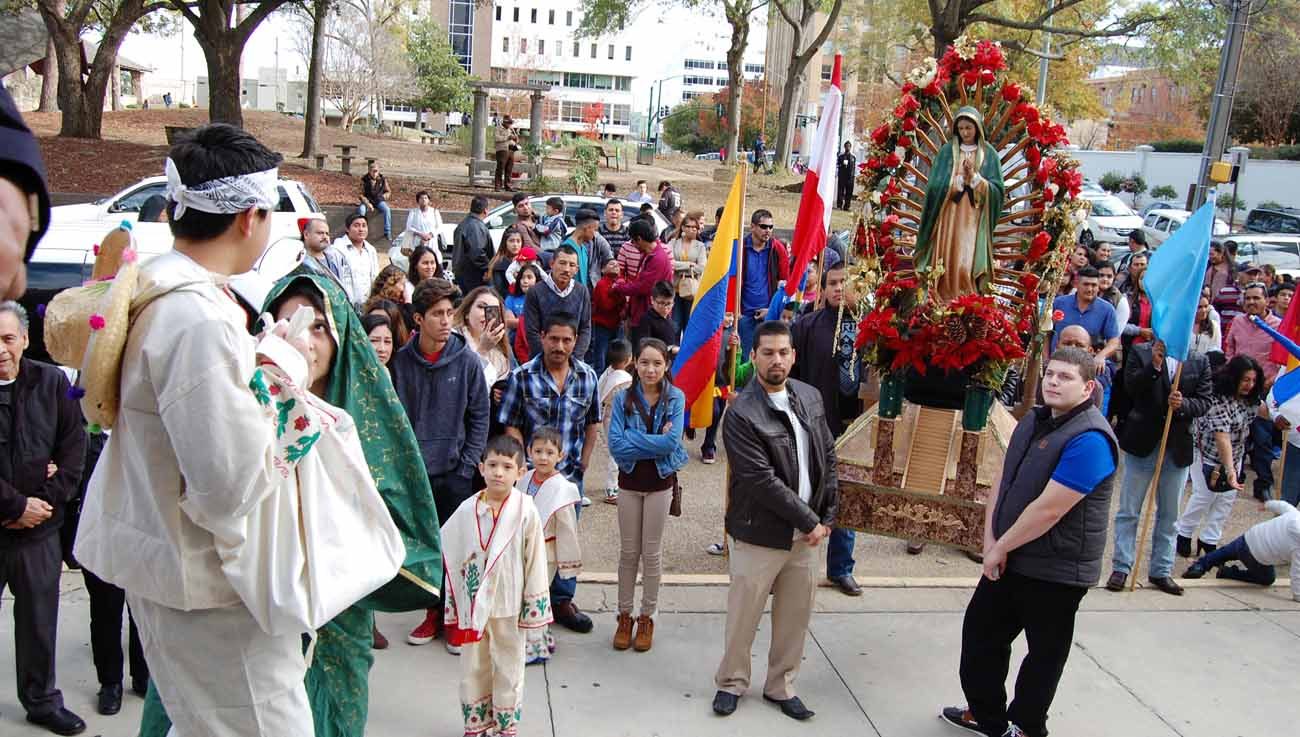 JACKSON, Miss. (CNS) — A good talk with your mother every day could improve your health. At least, that’s what’s happened for immigrants in one Mississippi community.

A study out of the University of Alabama exploring the link between faith and health demonstrated that those with a devotion to Our Lady of Guadalupe had fewer negative health issues related to stress.

“This drives home how important faith is. In the study results, I found that people who are exposed to stress – their well-being goes down over time. Those who were Guadalupan devotees broke that pattern,” explained Rebecca Read-Wahidi, the study’s author.

She grew up in Forest, where the state’s largest concentration of Latinos works in poultry plants. They worship at St. Michael or at its mission San Martin.

A community of religious sisters, Guadalupan Missionaries of the Holy Spirit, ministers to the mix of Mexicans, Guatemalans and other Latin Americans. The sisters teach English, host consulates and even offer workshops in what to do if people are stopped by police or immigration agents.

Constant worry about immigration raids can wear down an already poor population. Read-Wahidi has told stories of a 2012 road-block that led to the deportation of 40 people, sending a wave of fear through the rest of the community. Having a patroness, a protector and a surrogate mother helps ease that physical and mental stress.

Mary appeared to St. Juan Diego at dawn Dec. 9, 1531, on Tepeyac Hill, in what is now northern Mexico City. She appeared to Juan Diego twice more, and the last time, on Dec. 12, filled his “tilma,” or cloak, with roses. When he emptied his cloak of the roses, he found that it bore her image. The cloak is still on display at the Basilica of the Shrine of Our Lady of Guadalupe built on the site where Mary appeared.

In the image, she is dark skinned, pregnant and surrounded by stars. She stands in front of the sun’s rays, a commonly known symbol of an Aztec god, symbolically eclipsing his power as she looks lovingly down on her people. Millions of pilgrims still flock to see the tilma.

Read-Wahidi studied at Mississippi State University. Her Spanish studies took her to Mexico where she was exposed to the pervasive devotion to Our Lady of Guadalupe, whose feast day is Dec. 12.

“While I was there, I became interested in Mexican Catholicism because it was different than what I was familiar with,” she told the Mississippi Catholic, newspaper of the Diocese of Jackson. When she returned home, she began to see the Virgin of Guadalupe in her own hometown.

“It is really fascinating to me because it really is a contrast in Mississippi — which is very Protestant. Here is this Mexican feast being carried out in the streets of a Mississippi town,” she said.

Read-Wahidi wrote her master’s thesis about Our Lady of Guadalupe and migrant communities in Mississippi. She expanded upon her earlier thesis while studying for a doctorate in bio-cultural medical anthropology at the University of Alabama.

“I liked going there because I could continue working with the same community,” Read-Wahidi said. “I went from (looking at) the celebration itself into how they use it to deal with stress, specifically immigration stress.”

The sisters in Morton welcomed her, introducing her to the community and facilitating meetings. Read-Wahidi developed a survey to gauge the impact of their faith on their health.

Our Lady of Guadalupe is more than just a mother figure to her people, she is their mother. Read-Wahidi said most of the devotees she interviewed have conversations with her throughout the day.

Mary “listens to their worries,” said Sister Lourdes Gonzalez, a member of the Guadalupan Missionaries of the Holy Spirit, who helped with the study. “It’s a way to pray. People talk to her as if she is alive and in the room. She has a special place in the family.”

Father Tim Murphy, pastor at St. James Parish in Tupelo, calls the relationship profound and inspiring. “She is their mother in faith, in heaven and is present to them,” he said.

This connection to the poor may be why people see Mary as the perfect intercessor. “They may not feel comfortable talking to God — but they can speak to the Virgin. She is the mother figure. When they are so far from home, they need a mother figure,” Read-Wahidi said.

Redemptorist Father Michael McAndrew has been working in Hispanic ministry for many years and gives presentations on St. Juan Diego’s experience. “When Juan Diego does not want to go to the bishop, Mary tells him ‘am I not here? Am I not your mother? Would your mother not protect you on your journey? I am with you.'”

Read-Wahidi wrote in a journal article that immigrants place their stress in Mary’s hands: “When I asked what people petition the Virgin to help them with, they mentioned: finding work and keeping their jobs, not getting deported or arrested, the health of their family back in Mexico and here in the United States, the safety of family members who were making the journey across the border, and their own safe return back home.”

These prayers offer relief from the stress of their everyday lives. “They are seen as outsiders. They are not equal (here). They have the experience of racism. It is a way to remind themselves that in the eyes of the Virgin, all people are equal,” said Read-Wahidi. This idea has spread to other immigrants through public celebrations surrounding the feast.

Every year on or around the Dec. 12 feast day, immigrants across Mississippi leave the safety of their homes and churches to take their mother to the streets and celebrate her love and protection.

Celebrations include processions, hours-long traditional Aztec dances, meals and liturgy. Everyone, especially other immigrants are welcome. In this way, the celebration in America is unique. Instead of being only a Mexican feast, it is a feast for all.

“They make the celebration public — it is taken out into the streets. It gives the Mexican community a chance to share her (the Virgin). They enjoy seeing other people embrace her,” explained Read-Wahidi.

“We make processions because we know as a people we are walking in life, we are on a journey — we are walking to heaven, to God,” said Sister Gonzalez.

The celebrations are a sharp contrast to daily life for immigrants. They spend most of their lives trying to avoid attention. But for the feast, they come out in droves. Father Murphy said 300 people attended one procession in northeast Mississippi.

“The best of liturgy does not represent, it re-presents the truth,” said Father Murphy. “This celebration is good liturgy. Who does (Our Lady of) Guadalupe appear to? The lowest of the low,” he said. Asking Mary to intercede offers a powerful conduit to Jesus since, as Our Lady of Guadalupe, “the mother of our savior is the mother of the poor.”

NEXT: Archbishop urges funding for HIV, AIDS programs at peril in budget