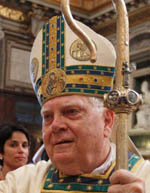 WASHINGTON (CNS) — The president of the U.S. Conference of Catholic Bishops offered his prayers and condolences to family and friends of Cardinal Bernard F. Law, who died Dec. 20 in Rome, but at the same time he called abuse survivors “brave” and said the Catholic Church must keep them “close in prayer.”

“At this time especially we keep close in our prayer the brave survivors of sexual abuse,” he said in a statement. “Their witness would lead to a comprehensive response from the church in the United States to protect and heal the deep wounds of abuse. I pray they may find strength and peace in the mercy of Christ.”

Cardinal Law had been one of the most powerful and respected U.S. bishops until his legacy was blemished by the devastating sexual abuse of minors by priests in his Archdiocese of Boston.

He died at age 86 and will be buried in Rome, where he had his last assignment. His funeral Mass was to be celebrated the afternoon of Dec. 21, according to the Vatican.

In releasing Cardinal DiNardo’s statement, the USCCB said: “As we reflect on the legacy of Cardinal Law, it will likely bring back painful memories for survivors. The church seeks to always respond as supportive pastors.”

“If you have been abused or know of someone who has been abused, contact the local diocesan victims assistance coordinator and, where you may have knowledge of a crime, local law enforcement,” it said.

In his reaction, Cardinal DiNardo said he echoed the statement released earlier in the day by Cardinal Sean P. O’Malley of Boston, who said that Cardinal Law had headed the Boston Archdiocese “at a time when the church failed seriously in its responsibilities to provide pastoral care for her people, and with tragic outcomes failed to care for the children of our parish communities.”

He recognized that his predecessor’s death “brings forth a wide range of emotions on the part of many people.”

“I am particularly cognizant of all who experienced the trauma of sexual abuse by clergy, whose lives were so seriously impacted by those crimes, and their families and loved ones,” Cardinal O’Malley said. “To those men and women, I offer my sincere apologies for the harm they suffered, my continued prayers and my promise that the archdiocese will support them in their effort to achieve healing.”

In other reaction, an official with Survivors of Those Abused by Priests said: “We are sure that many people will have mixed feelings about the death of Cardinal Bernard Law.”

The survivors of sexual abuse in Boston “were those most hurt” by the cardinal’s “cover-up of sex crimes” and his “subsequent promotion to Rome,” said Joelle Casteix, SNAP’s Western regional leader. “No words can convey the pain these survivors and their loved ones suffered.”

The “promotion” was a reference to St. John Paul II appointing Cardinal Law in 2004 to be the new archpriest of the Basilica of St. Mary Major, one of the four major basilicas of Rome, after he resigned as archbishop of Boston in the wake of the abuse scandal.

“Why was (Cardinal) Law promoted when Boston’s Catholic children were sexually abused, ignored and pushed aside time and time again?” SNAP asked.

The Boston sex abuse scandal broke in 2002. Cardinal Law’s authority began to collapse in January of that year with the criminal trial of serial child molester John Geoghan and the court-ordered release of archdiocesan files on Geoghan to the media.

Geoghan had been allowed to stay in active ministry for three decades before he was finally removed and subsequently laicized.

Cardinal Law publicly apologized on several occasions and announced a series of major policy changes — most importantly, removing permanently from ministry any priest ever credibly accused of sexual abuse of a minor and turning over to district attorneys the names of all priests against whom any abuse allegation had been made.

Casteix said SNAP hoped that the Vatican “keeps these survivors in mind when it comes time for the cardinal’s funeral.” The organization anticipated Cardinal Law’s life would be celebrated with “pomp and circumstance … when Boston’s clergy sex abuse survivors suffered so greatly.”

“We highly doubt there is a single victim of abuse who will ever receive the same attention, pomp and circumstance by Pope Francis,” the statement said. The Vatican released no details ahead of the Dec. 21 funeral for Cardinal Law beyond confirming it would take place that day.

Casteix said, “It is time for the Vatican to refocus on change: protecting children and those who have been hurt.”

PREVIOUS: Young Edmundite priests’ goal is to evangelize with their YouTube show