Young Edmundite priests’ goal is to evangelize with their YouTube show 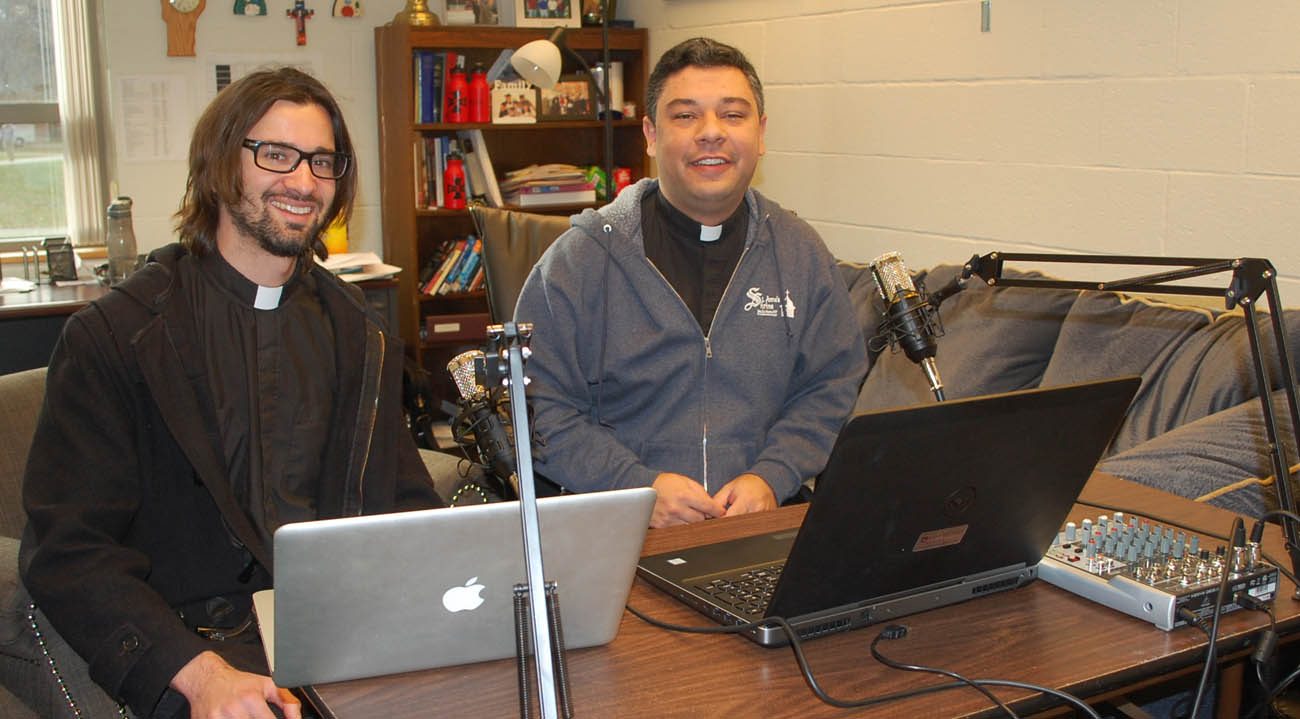 He worked in information technology in his native Venezuela before becoming a priest of the Society of St. Edmund, based at St. Michael’s College in Colchester. So, it seems natural that he would come up with an idea to combine technology and education about the Catholic faith.

“People are not coming to church, so this was an idea to bring the church to them,” he said. “The charism of the Society of St. Edmund is to evangelize people. Everything we do is geared toward that. This is one piece of that.”

“This” is “The Edmundite Show,” a weekly half-hour program on YouTube presented by Father Oropeza and fellow Edmundite, Father Michael Carter.

The show, produced in Father Oropeza’s office on campus, is not scripted; the order’s two youngest priests just let the conversation develop.

Father Oropeza, 36, and Father Carter, 27, presented the first Edmundite Show for All Saints Day in November. Since then, topics have focused on vocations, the sacrament of reconciliation, St. Edmund, Thanksgiving and the feast of Christ the King, Advent and the Immaculate Conception.

Because he already had the computer he uses for the show, Father Oropeza only needed two microphones and a soundboard. His religious order invested less than $200 for the equipment.

Technology is his hobby, so the priest, who is international coordinator of MOVE at St. Michael’s, likes to keep up with the latest developments. (MOVE stands for Mobilization of Volunteer Efforts.)

YouTubers and their programming made him think of a program about the Catholic faith, so he asked Father Carter to work with him on the project and “talk about church stuff.”

Through “The Edmundite Show,” they hope to educate about the faith, promote vocations and help viewers get to know the Society of St. Edmund, the 175-year-old religious order founded in France that began St. Michael’s College.

The program streams live at 4 p.m. local time on Wednesdays on the Society of St. Edmund’s YouTube channel. While it is live streaming, there is a chat feature so the priests can accept comments and questions; Father Oropeza monitors the chat on a computer during the recording of the program.

“It’s not a fully polished product yet,” Father Carter said in an interview with Vermont Catholic, the magazine of the Diocese of Burlington.

Though the show is not directed to any one demographic, Father Oropeza said students at the college are curious about religion and God. When they have the opportunity to talk to him, they ask deep questions, “but at the same time, they are not coming to the sacraments,” he noted.

The idea of “The Edmundite Show,” then, is to catechize, which they do in a light-hearted way. “In a way, that’s the nature of the medium,” said the bearded Father Carter, an avid Facebook user. “We want to present energy that is fun and sometimes silly — that’s more me than Lino,” who is clean-shaven.

Humor is a tool he uses when he teaches religion at the college or preaches at the three churches that make up the Essex Catholic Community where he serves as parochial vicar. “When you use the element of humor, it brings people’s guard down and you can segue into something more serious.”

The priests, both graduates of St. Michael’s College, seek to bring the depth of their beliefs out in a way that is understandable and appealing.

Father Oropeza had hoped for five viewers for the first show, so he was surprised to have 30. But that number has grown as high as 1,034 with people watching not only in the United States but in such other countries as Venezuela, Bolivia, Mexico, Spain and Sweden.

He hopes more people will subscribe to the show and that there will be more interaction with viewers during live streaming. He’s also considering adding another live stream on a different day of the week to interview various guests.

The fruit of their efforts, Father Carter said, will be facilitating even one person having a more open perspective about the Catholic Church, the priesthood or vocations. “I’d be pleased with that … or to make one person more curious about the church than they were before.”

Father Oropeza said he knows of one man who binge-watched “The Edmundite Show” and liked it because he learned about the Catholic faith.

“Now we need (the show’s) community to grow,” he said.

Editor’s Note: To watch the show and subscribe for free, go to https://tinyurl.com/y7p883b9.

Urban is the content editor/staff reporter for Vermont Catholic magazine, the publication of the Diocese of Burlington.