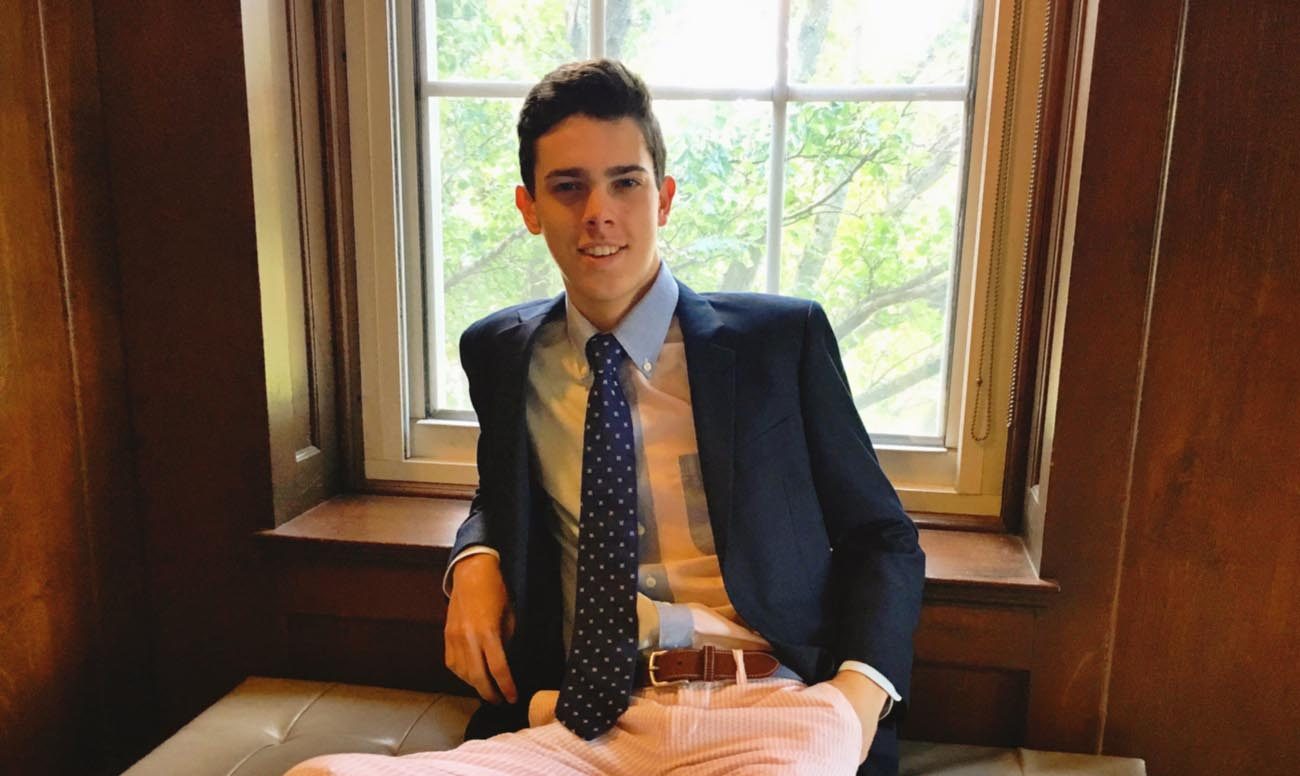 Riley Benner, a sophomore at the Jesuit-run College of the Holy Cross in Worcester, Mass., sports one of his handmade ties that can be ordered though the online site phoenixhaberdashery.com. He started the tie company, Phoenix Haberdashery, when he was a junior at McQuaid Jesuit High School in Rochester, N.Y., and employed refugee workers from the Rochester area. (CNS photo/courtesy Riley Benner)

WASHINGTON (CNS) — A panel discussion last year on the challenges faced by refugees didn’t sit well with a freshman at the Jesuit-run College of the Holy Cross in Worcester, Massachusetts.

“The stories that I heard reminded me that when we picture refugees, we falsely imagine a mass of people hoping to hoard into our country and disturb our system,” Riley Benner wrote in a class paper.

But hearing the personal struggles and everyday challenges of refugees living in the Worcester area did more than just make Benner think. It inspired him to restart — yes that’s right — a business he began when he was in high school that employed refugees.

Most college freshman don’t leave businesses behind when they pack up clothes, posters and mini- refrigerators for school, but Benner did not think he would be able to operate his reversible tie business from afar.

He didn’t sell it but he said he had been sad to let it go.

He started the tie company, Phoenix Haberdashery, when he was a junior at McQuaid Jesuit High School in Rochester, New York, and employed refugee workers living in the Rochester area. The word Phoenix in the company’s title, was symbolic of the employees’ chance to start a new life.

The panel discussion Benner attended last year was part of the school’s required Montserrat seminar for freshman that focused on economic development for Third World countries and refugees. For Benner, it served as a reminder not only of the challenges refugees face but also that so many refugees lived right in his school’s town.

In short, he felt compelled to do something, which for him meant restarting his business.

He met with the college’s Office of Entrepreneurial Studies and learned about, and later received, a grant that allows students to gain capital and jump-start their ideas. He also pitched his business idea at an alumni event for entrepreneurs. 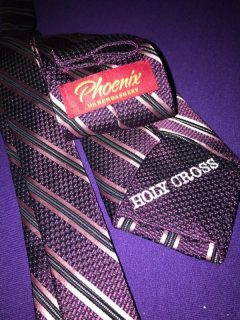 This is a handmade tie from Phoenix Haberdashery. (CNS photo/courtesy Riley Benner)

In a break between studying for final exams, he told Catholic News Service the Kickstarter funds will enable him to hire and train two more people to sew the handmade ties sold through the online site — https://phoenixhaberdashery.com. He admitted he has had very little sleep in recent weeks, starting his business work usually at 11 p.m. each day, but he said it’s “definitely worth it.”

He also knows more on the business end now than what he did at 15 when, he said, he “didn’t exactly know” what he was doing but he had some help. The idea of a reversible tie came to him when he was required to wear ties every day as part of his high school uniform. A reversible tie could still be worn if something was spilled on it and it was turned over. He is currently working on the patent for the tie claiming it’s not like other reversible ties that use magnets.

His tie still loops and can easily be flipped, which he said is unique because it doesn’t lose the single-tie feel even though it is two ties in one.

Each tie sold by Phoenix Haberdashery is handmade by refugees in Worcester and comes with a tag that tells the story of the seamstress who made it. The tie fabric is imported from Italy and the lining comes from the Netherlands.

The reversible tie was not Benner’s first business idea. He had a short spell of selling laser pointers and even soda out of his locker.

He plans to combine his entrepreneurial resourcefulness with a college degree: a double major in philosophy and political science as well as a pre-business certificate. It’s no surprise that he also has a few more ideas for products to sell up his sleeve.

For now, he is most proud of what the company is doing, stressing that even though Americans can’t do anything about the decreased number of refugees currently allowed in this country, “we still have a duty to help.”

NEXT: Young Edmundite priests’ goal is to evangelize with their YouTube show