The ‘hurt is still there’ over abuse crisis, Boston cardinal says 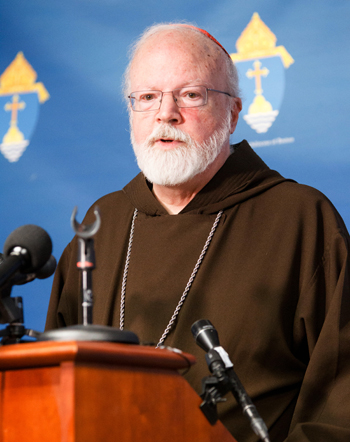 Boston Cardinal Sean P. O’Malley answers questions from the media on the death and legacy of Cardinal Bernard F. Law at the headquarters of the Archdiocese of Boston Dec. 20 in Braintree, Mass. Cardinal Law, who resigned as head of the Boston Archdiocese when the clergy sex abuse scandal was uncovered in 2002. He died early Dec. 20 in Rome at age 86. (CNS photo/Gregory L. Tracy, the Pilot)

BRAINTREE, Mass. (CNS) — Journalists crowded into a room in the Archdiocese of Boston’s Braintree headquarters Dec. 20 as Cardinal Sean P. O’Malley answered questions following the death of Cardinal Bernard F. Law, whose death was officially announced by the Vatican earlier that day.

The former archbishop of Boston, Cardinal Law resigned in 2002 amid allegations of mishandling cases of sexual abuse of minors by priests in the archdiocese. In 2004, the cardinal was named archpriest of a basilica in Rome, where he died at age 86.

“This is a very difficult day for survivors and all of us in the Archdiocese of Boston and for me,” said Cardinal O’Malley at the news conference.

“We have anticipated this day, recognizing that it would open a lot of old wounds and cause much pain and anger in those who have suffered so much already, and we share in their suffering,” he continued.

“As the church must always do, we seek forgiveness for the sins of the past and for all the things that were done or not done that have contributed to the suffering of so many,” he said.

The archdiocese has a continued commitment to “provide for the assistance and support for victim survivors and their families, and to strive to maintain safe environments in all of our churches, schools, institutions, and agencies,” said Cardinal O’Malley, who succeeded the late cardinal as Boston’s archbishop.

For victims, the “hurt is still there, the healing is still necessary,” said Cardinal O’Malley. “We must all be vigilant, particularly for prevention of child abuse and to create safe environments and to be constantly monitoring how we’re doing following our policies, our commitment to the whole community to take this very seriously and do whatever we can to guarantee safe environments for our children.”

Asked to comment on Cardinal Law’s appointment as archpriest of the Basilica of Santa Maria Maggiore following his resignation in Boston, a move that many victims saw as almost a reward, Cardinal O’Malley said he doesn’t believe that would happen today.

“I think there’s been enough growth and consciousness of this problem in the Holy See that that would not happen,” he said.

Responding to a journalist’s question on a statement issued earlier that day in which Cardinal O’Malley touched briefly on the positive aspects of Cardinal Law’s legacy, which has angered some victims, Cardinal O’Malley said, “All of us are more than one-dimension. To be realistic, we have to recognize there was more to this man than his mistakes.”

“We tried to craft a statement that would be fair and, at the same time, sensitive to the particular suffering of people in the archdiocese,” he said.

In response to a question on whether he can forgive Cardinal Law, Cardinal O’Malley said that “forgiveness is what Christianity is all about, and that doesn’t make it easy.”

“Christmas is about healing, relationships and forgiveness, and a big part of healing is being able to come to grips with our own difficulty in forgiveness,” he said.

Asked if he believes Cardinal Law’s soul will be welcomed into heaven, Cardinal O’Malley said he doesn’t know if anyone can answer that question, but added, “I hope that everyone goes to heaven.”

“This is what the mission of the church is, to work so that everyone will go to heaven, but I am not here to sit in judgment of anyone,” he said.

Labbe is a reporter at The Pilot, newspaper of the Archdiocese of Boston.

PREVIOUS: The future for Gregorian chant appears to be bright

NEXT: Priest asks for prayers for victims of Bronx fire and their families