The future for Gregorian chant appears to be bright 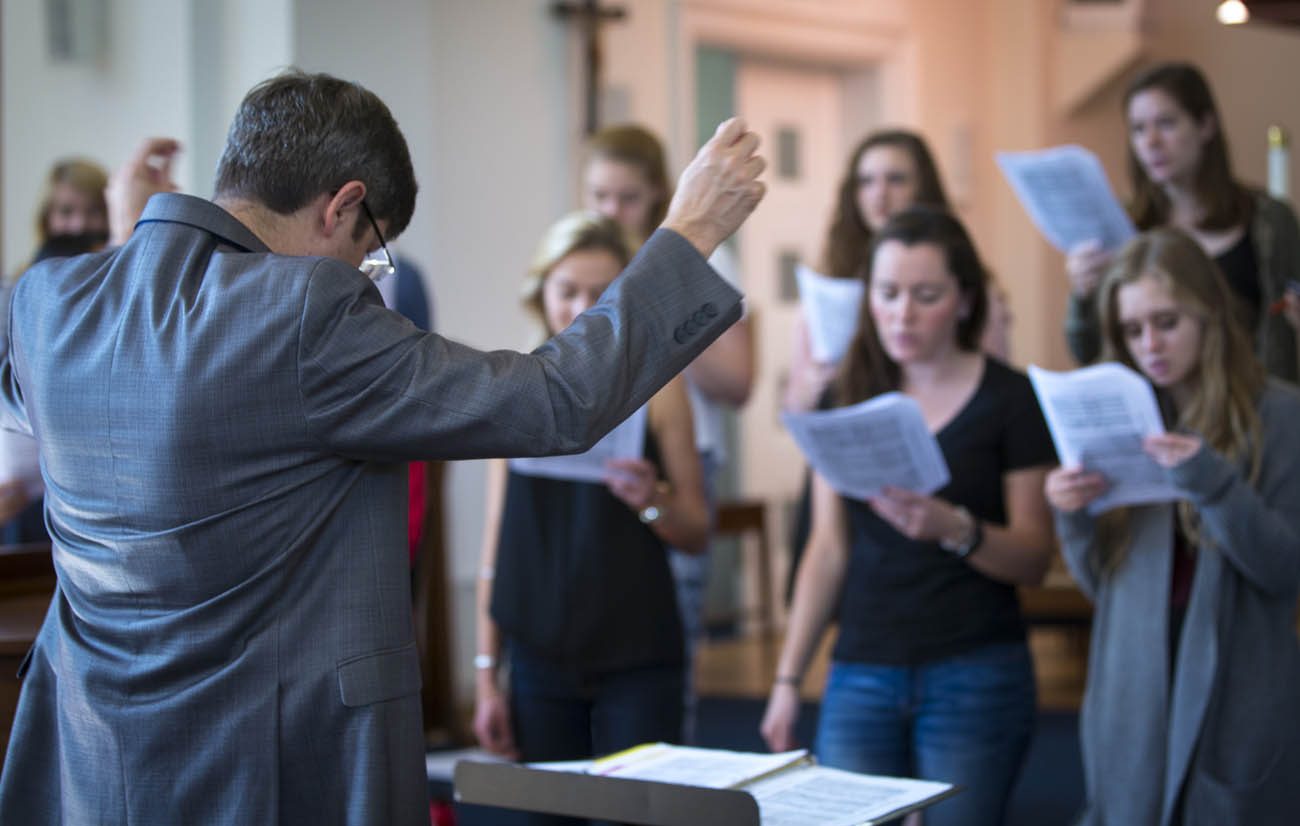 Timothy S. McDonnell, director of music ministries at the Institute of Sacred Music, Benjamin T. Rome School of Music at The Catholic University of America in Washington, conducts an Oct. 10 Gregorian chant rehearsal at the school's St. Vincent Chapel. Gregorian chant is the singing of the liturgy and its texts are almost entirely scriptural. (CNS photo/Chaz Muth)

WASHINGTON (CNS) — As David Lang assembled seminarians for an October rehearsal, he announced they would be going over selected Gregorian chants that would be an important part of the liturgy for an upcoming Mass at Theological College, a national seminary at The Catholic University of America.

It’s Lang’s first year as the music director of the seminary and while his primary mission at this rehearsal is to get these men ready for an important Mass, his ultimate mission is to prepare them to oversee the musical direction of their future parishes once they are ordained priests.

Since Gregorian chant is considered the proper music of the Roman rite, Lang is eager to teach it to the seminarians and hopes they will make the prayerful sounds a key component in their ministries.

If the past is any indication of what the future may hold for Gregorian chant’s place in Catholic life, prospects are good that it may once again become the principal music at Mass.

(See Part Two of this series on Gregorian chant today and Part One on its long history, both including videos.)

Since its origins in the ninth century, Gregorian chant has enjoyed widespread popularity in its use in religious houses, the Divine Office and the Mass, and eras when it was rare to hear its unique sounds in any Catholic church.

The chant experienced a massive revival in the early 20th century with two popes documenting its significance in the liturgy, only to drastically recede when the Mass switched from Latin to the vernacular following the Second Vatican Council in the 1960s.

Once again, Gregorian chant is in the midst of a revival of sorts, with renewed interest, especially among younger Catholics, seminarians, priests and church music directors, said Timothy S. McDonnell, director of the Institute of Sacred Music at The Catholic University of America in Washington.

Most Masses currently have some elements of Gregorian chant.

For instance, when the priest sings the Our Father and directs the congregation to join in song, they are all chanting, because they are singing a vital part of the liturgy for the Mass.

Nevertheless, most parishes in the United States presently do not have Gregorian chant as their principal music, McDonnell said.

That could change in the coming years, he said, if history repeats itself and the revival that has been growing since the 1990s continues.

More cathedrals throughout the country are building Gregorian chant into their repertoires and a growing number of younger church musicians are making it a part of their spiritual formation, McDonnell said.

Admittedly, some parishioners were upset when the music changed from the praise and worship genre to sacred music and Gregorian chant more than a decade ago and some even left the church community because of it, Father Pollard said.

As time went on the Gregorian chant actually attracted new parishioners and the church now enjoys large numbers in the pews during the parish’s busy weekend Mass schedule, he said.

“It’s become a signature of sorts for us,” Father Pollard said. “There’s also a curiosity out there and we do get visitors who come just to check out what the music is like. I have to say, I really like that there is that kind of curiosity.”

When it comes to music, each parish has its own charism, because the gathering of talent is unique and the philosophy of the pastor and music director tends to be distinctive, said James Senson, music director at St. John the Beloved.

“While the sound of the chant might be slightly different from church to church, the character of it is ancient and uniquely Catholic,” Senson told CNS. “I think that’s why this is growing in popularity. It’s so much a part of the church. It’s the text of the church.”

It’s for this reason that Theological College seminarian Gabe Bouck envisions Gregorian chant to have pride of place in any future parish he serves.

“The liturgy should speak to the glory of God,” Bouck said, and sung prayer and Scripture elevates worship.

“The liturgy is the highest peak of any sort of worship experience that we will every encounter this side of eternity,” he said. “So, if I know that if there is nothing greater on this earth that I can do than to worship God, then everything that goes into that liturgy needs to be the best and the most beautiful that I can possibly bring to it.”

It’s a philosophy that is becoming more common among seminarians, McDonnell said, causing many of them to seek out their music directors for additional training in Gregorian chant.

Though extensive training in Gregorian chant was once a requirement in training for the priesthood, it’s not necessarily compulsory in most of today’s seminaries, Lang said.

All seminarians learn the basics of chant, but if they want more advanced training they have to take elective coursework or seek out individual lessons from their music directors, he said.

Such was the case for Deacon Wade W. Bass, a fourth-year seminarian at Theological College, who did not have a musical background in his upbringing and says his singing ability “is somewhere around the level of making what my dad calls a joyful noise.”

Still, he believes music is an important part of worship and now his exposure to Gregorian chant has convinced him that it should be at least some part of Mass.

So, he works with Lang to improve his vocal abilities so that he can sing part of the liturgy and better implement the chant after he is ordained a priest.

It’s going to take leadership from the priests, women religious, seminary leaders, music directors and the laity for Gregorian chant to become the dominant music in most Catholic churches in the future, McDonnell said.

“I think we’re starting to see that happen,” he said.

NEXT: The ‘hurt is still there’ over abuse crisis, Boston cardinal says