Bangladesh, Myanmar youths are a sign of hope for Asia, pope says 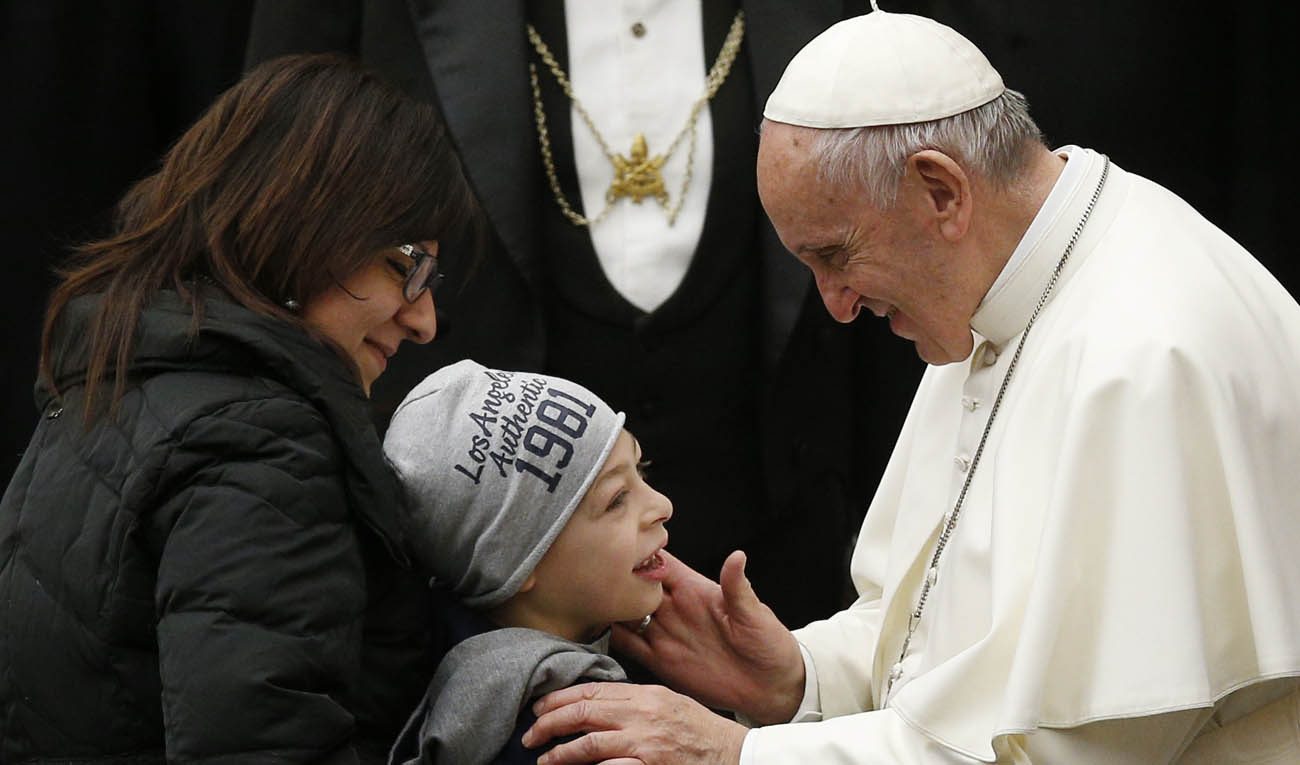 Pope Francis greets a child as he meets the disabled during his general audience in Paul VI hall at the Vatican Dec. 6. (CNS photo/Paul Haring)

VATICAN CITY (CNS) — Young people in Myanmar and Bangladesh are a source of hope for a peaceful future in their countries after years of war and suffering, Pope Francis said.

As is customary, at his general audience Dec. 6, the first after his Nov. 27-Dec. 2 trip to Asia, Pope Francis reviewed his visit.

“In the faces of those young people, full of joy, I saw the future of Asia: A future that doesn’t belong to those who build weapons, but to those who sow brotherhood,” the pope said.

As temperatures in Rome hovered just above 40 degrees, the audience was held in the Paul VI audience hall to avoid the chilly weather.

The pope entered the hall, stretching his hands to each side of the aisle to greet people who reached out to touch him.

After telling the estimated 8,000 pilgrims that he wanted to speak about his recent visit, four Bangladeshi priests cheered loudly and held up a banner that read, “Thank you, Papa.” The pope smiled and waved at the small group.

Noting that it was “the first time a successor of Peter visited Myanmar,” the pope said he hoped to express “the closeness of Christ and the church to a people who have suffered due to conflict and repression and that now is slowly moving toward a new condition of freedom and peace.”

The Catholic Church in Myanmar is “alive and fervent,” he said, adding that he had “the joy of confirming them in the faith and in communion.”

He also said his Nov. 29 meeting with a group of senior Buddhist monks was a moment to “manifest the church’s esteem for their ancient spiritual tradition and the trust that Christians and Buddhists together can help people to love God and neighbor while rejecting every kind of violence and opposing evil with good.”

Pope Francis said his visit to Bangladesh “followed in the footsteps of Blessed Paul VI and St. John Paul II” and “marked a further step toward respect and dialogue between Christianity and Islam.”

He also praised the country’s care for religious liberty and its welcoming of welcoming hundreds of thousands of Rohingya refugees from Myanmar.

“I wanted to express my solidarity with Bangladesh in their commitment to aid the Rohingya refugees flowing en masse in their territory, where the population density is among the highest in the world,” the pope said.

The “most significant and joyful event” of ordaining 16 new priests in Dhaka, he said, was “the sign of a living community where the voice of the Lord resounds, calling on them to follow him.”

This joy was also evident during his visit to the home in Dhaka where the Missionary of Charity sisters care for “so many orphans and people with disabilities,” Pope Francis said.

“And they never lack a smile on their lips,” the pope said. “Sisters who pray together, who serve the suffering continuously with a smile. It is a beautiful witness. I thank these little sisters so much.”

NEXT: Pope concerned by U.S. move to recognize Jerusalem as Israel’s capital