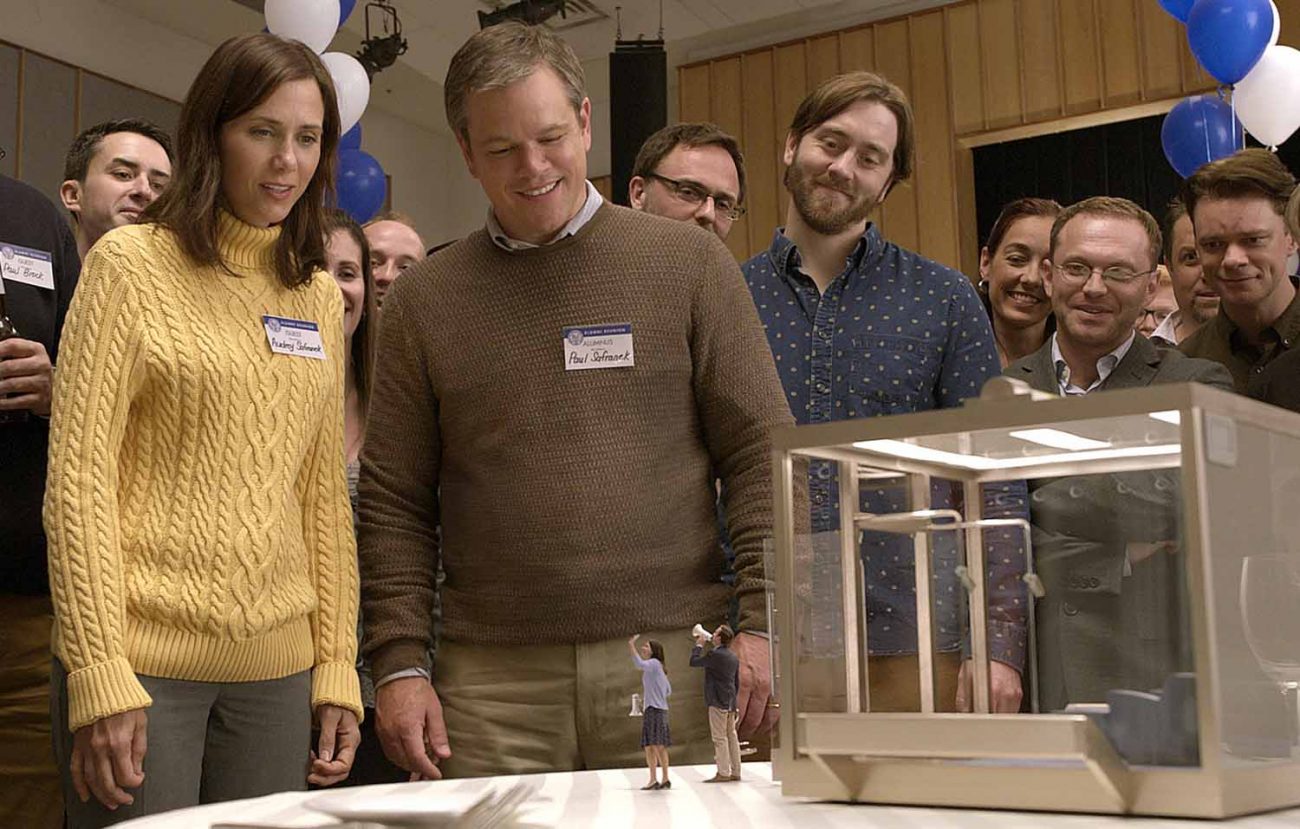 Kristen Wiig and Matt Damon star in a scene from the movie "Downsizing." (CNS photo/Paramount)

NEW YORK (CNS) — An odd combination of elements makes up the offbeat drama “Downsizing.” But the residue that remains with viewers is ultimately a positive one.

On the dramatic level, what begins as a curious sci-fi fantasy about a futuristic technology people can use to shrink themselves (and thereby greatly reduce the toll they take on the environment) becomes a deeply humane, faith-tinged story once it veers off in an unexpected direction.

Morally, to reach the picture’s ethical core, grown moviegoers will have to resolve not to be put off by the incidental sights and strong vocabulary that make this a wholly unsuitable offering for youngsters. Some unacceptable bedroom behavior and implicitly anti-life propaganda about the supposed results of overpopulation are further barriers along the path to a wrap-up more in harmony with Catholic teaching.

Early scenes are only marginally engaging as we follow the typical suburban life of Paul Safranek (Matt Damon), an in-house physical therapist at the Nebraska headquarters of Omaha Steaks.

Strapped for cash and anxious to improve their lifestyle, Paul and wife Audrey (Kristen Wiig) decide to “go small.” They do so on the assurance that their relatively meager life savings will be multiplied in value many times in their new, miniature environment — a luxurious community for the diminutive known as Leisureland.

The film tarries to show the details of the medical procedure, then ambushes Paul with unexpected news. Waking up from the irreversible operation, he discovers that a panicked, selfish Audrey has decided, at the last possible moment, to stay big.

A messy divorce ensues in which Audrey manages to fleece Paul. As a result, Paul is reduced to working as a phone salesman and living in a modest apartment instead of the ostentatious McMansion he and Audrey had chosen in Leisureland.

Attending a wild party thrown by his upstairs neighbor, cynical yet strangely likable Serbian businessman Dusan Mirkovic (Christoph Waltz), Paul uncharacteristically decides to experiment with an unknown drug and wakes up on Dusan’s floor the next morning much the worse for wear.

Paul seems to have hit rock bottom, at least temporarily. Yet his life is about to be transformed by his interaction with Ngoc Lan Tran (Hong Chau in a powerful performance), one of the maids who arrive to clean up the post-party mess.

A Vietnamese refugee who gained brief notoriety as the only survivor of a group escaping from her homeland — where, as an outspoken dissident-turned-political-prisoner, she had been forcibly downsized by her captors — Ngoc, who lost part of her leg to amputation after being rescued, introduces Paul to a lifestyle and set of priorities entirely at odds with his own.

Accompanying her to the outlying slum where she lives, Paul witnesses the daily round of charitable giving in which Ngoc engages, distributing the food cast off by her various wealthy employers. In case he’s in any doubt as to the inspiration for her generosity, she then announces that their next stop will be the evangelical chapel where she enthusiastically worships.

Paul feels compelled to help Ngoc because his attempt to use his professional skills to fix her faulty prosthesis, soon after their first meeting, went badly awry, leaving her immobilized. And Ngoc, it turns out, is as feisty and even dictatorial as she is selfless.

Director and co-writer Alexander Payne’s conversion story, penned with Jim Taylor, goes on to juxtapose contemporary urban values against the more traditional and substantial ones espoused by Ngoc, and forces Paul to make a fundamental choice between them. He also has to decide whether a sexual encounter with Ngoc is to be an isolated incident or the inappropriate prelude to something more lasting.

Dusan’s eccentric charisma — he’s at once both sardonic and somehow warmhearted — and the spice that enlivens Ngoc’s personality keep the picture’s tone from sliding into sentimentality. So, despite its aesthetic and moral rough spots, overall, “Downsizing” turns out to have considerable appeal for a mature audience.

The film contains full nudity in a medical context, off-screen premarital sexual activity, acceptability of divorce, drug use, a few uses of profanity as well as frequent rough and occasional crude and crass language. The Catholic News Service classification is A-III — adults. The Motion Picture Association of America rating is R — restricted. Under 17 requires accompanying parent or adult guardian.

PREVIOUS: If you think kids are lost in games, ‘Jumanji’ shows it could be worse