The ride to work takes a dark turn in ‘The Commuter’ 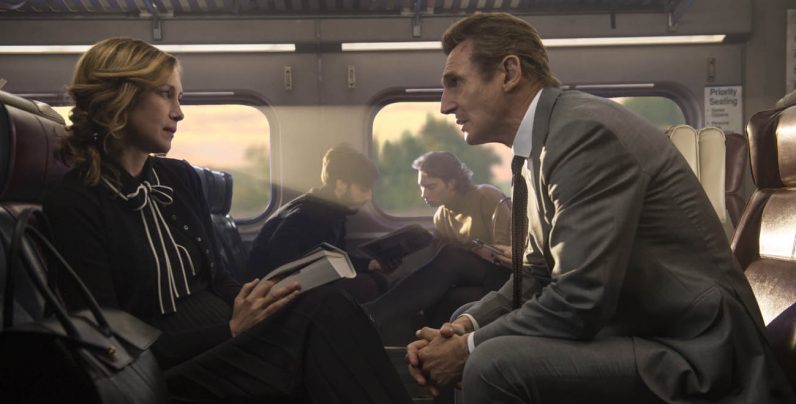 Vera Farmiga and Liam Neeson star in a scene from the movie “The Commuter.” (CNS photo/Lionsgate)

NEW YORK (CNS) — If you think your trip back and forth to work is trying, consider the plight Liam Neeson finds himself in as “The Commuter” (Lionsgate).

Neeson’s character, police officer-turned-insurance-salesman Michael MacCauley, is already having a bad day even before he catches the train from Manhattan’s Grand Central Terminal to suburban Tarrytown. Strapped for cash to begin with, Michael has just been let go from his job.

So when a stranger who calls herself Joanna (Vera Farmiga) offers him a large sum to identify one of his fellow passengers on the basis of a few scanty clues, the bizarre proposition gets his attention. It soon becomes apparent, however, that Joanna is not on the side of the angels and that her proposal is as much blackmail as bargain.

With his wife, Karen (Elizabeth McGovern), and son, Danny (Dean-Charles Chapman), in danger, Michael turns for help to Alex Murphy (Patrick Wilson), a friend and fellow cop who is still on the force. But he must largely fend for himself as he pursues his frantic search.

If all this sounds murky and improbable, it is, though lively action sequences help mask that fact. To the extent that director Jaume Collet-Serra’s generally efficient thriller aims to do anything more than deliver on the pleasures of its genre, though, its serious intentions are undermined by the logical shortcomings of the story.

Collet-Serra and screenwriters Byron Willinger and Philip de Blasi do present their protagonist with a fundamental moral dilemma: Should he imperil a stranger in exchange for the safety of his family? But the clumsy way they back him into this corner blunts the impact of their perfectly respectable ethical message.

As for the script’s digs at corporate America via the abrupt and uncaring way in which Michael gets the axe and through the nastiness of Vince (Shazad Latif), a commuting broker who is rude to everyone within reach, they are even more maladroit. (The dialogue uses up the sole F-word to which a film rated PG-13 is entitled to flip the bird to Vince’s ex-employer, real-life brokerage Goldman Sachs.)

Although “The Commuter” is not endorsable for kids, and the script includes too many vain invocations of the Lord, the bloodletting is at least minimal since Irish-born Michael prefers fisticuffs to gunplay. From an aesthetic point of view, while it avoids a total train wreck, the wheels on this vehicle for Neeson do creak under the weight of its large cargo of suspended disbelief.

The film contains much brawling and some lethal violence with brief gore, a scene implying use of pornography, about a dozen profanities, a couple of rough and several crude terms and an obscene gesture. The Catholic News Service classification is A-III — adults. The Motion Picture Association of America rating is PG-13 — parents strongly cautioned. Some material may be inappropriate for children under 13.

PREVIOUS: ‘Paddington 2’ finds our loveable bear in jail, but not out of charm